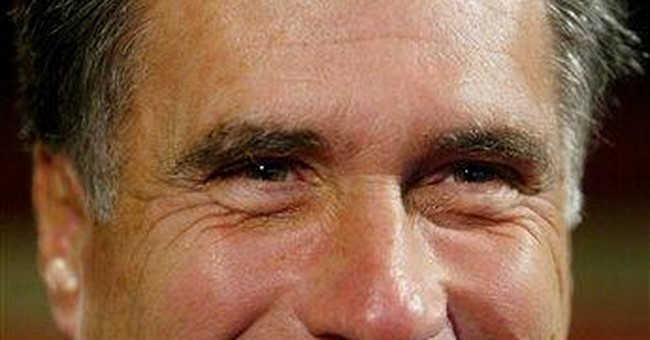 Though his latest surge in New Hampshire and Iowa party-preference polls has won little national fanfare, his slow but steady movement in the early caucus and primary states promises to give his come-from-behind candidacy the momentum needed to lift him out of his third-place showing in most national surveys. Romney's growing popularity in Iowa, whose presidential caucuses will officially kick off the 2008 race next Jan. 14, has thrown Giuliani and McCain (who are in first and second place, respectively, in the national polls) off balance in both states.

Last week, the Giuliani and McCain camps simultaneously announced they would not be participating in the Ames, Iowa, straw poll in August. The party poll has long been a traditional early test in the state, but Romney's strength in the latest public polls forced them to withdraw. The former New York mayor and the Arizona senator said they will continue to campaign hard in the caucus state, but early signs point to the likelihood of Romney beating both of them. No candidate has skipped the straw poll and gone on to win the Iowa caucuses in the past three decades. Still, Giuliani and McCain stressed they would be competing there as aggressively as ever.

The former Massachusetts venture capitalist is the clear front-runner in New Hampshire, too, where he has been running TV ads for much of 2007. His next-door neighbors got to know him well as governor, because the lower half of the state gets much of its news from Boston TV stations. It didn't hurt that he has made numerous forays into the state over the past four years, and vacations there as well.

So here is the potential political scenario that could be shaping up next year: Romney wins the Iowa caucuses, giving his campaign Big Mo right out of the starting gate, and cover stories in all the news magazines and the nightly news shows. He builds on that by winning New Hampshire one week later on Jan. 22, which sends him into the Southern primaries, where Giuliani now leads. Such a scenario runs into two big variables that could block Romney's well-laid plans to elbow his way to the front of the pack.

First, there is Giuliani's 9/11 fame and first-place showing in the national polls, which reflect his enduring strength in the megastates where most of the delegates are: New York, Pennsylvania, Michigan, New Jersey, Florida and California.

So sure is the Giuliani high command of their candidate's support in these and other big states, they considered bypassing Iowa or playing it down in their resource spreadsheets -- an idea they've rejected for now.

The other variable is the prospective presidential campaign of former Tennessee Sen. Fred Thompson, who has begun putting together the first building blocks of his campaign and raising money, but who doesn't plan on declaring his intentions until sometime next month.

Can Thompson, the star of TV's "Law and Order," pull together a viable national campaign so late in the two-year election cycle? That remains the big question, but it's a difficult stretch in the usual four-year, coast-to-coast organizing effort that is required in the modern political era.

Thompson has already hired some top talent, much of it borrowed from George W. Bush's 2000 presidential-campaign team. It includes Lawrence Lindsey, Bush's White House economic adviser, who was the architect of his tax-cut agenda; former Indiana congressman David McIntosh, as head of domestic policymaking; and Thomas Collamore, a Reagan administration veteran, as chief operating officer. Notably, George P. Bush, the son of former Florida Gov. Jeb Bush, is raising money for Thompson. The president's handsome and articulate nephew, who campaigned heavily for Bush, especially among Hispanic voters, in the 2004 campaign, is seen as an up-and-coming star in Texas politics and, possibly, a national political future.

With the exception of conservative Republican activists, Thompson is still relatively unknown in the electorate at large, though he could cut deeply into Romney's conservative base, especially in his native South where his Tennessee drawl, red pickup truck and aw-shucks personality plays well among the party faithful.

But early polling in key Southern primary states suggests Thompson has a long way to go before he is any threat to his party's front-runners. A recent Winthrop Poll of GOP voters in South Carolina showed him in fifth place, with just 6 percent.

In the meantime, Matinee Mitt, running as a veto-wielding, deficit-crushing, tax-cutting conservative and the heir to the Reagan mantle, has become the front-runner in the two earliest and likely pivotal party contests. Whether he can leverage that into the nomination of his party remains to be seen.