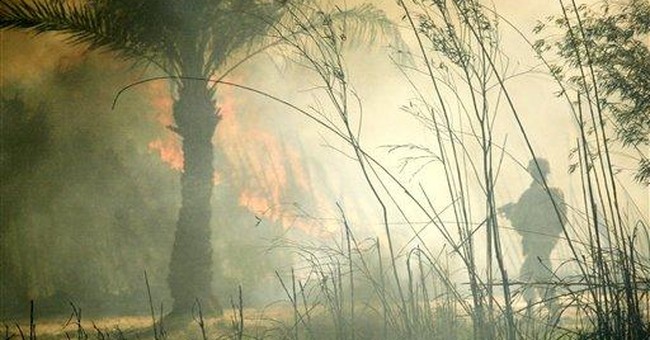 The administration's latest policy changes toward the Iraq war signal a gradual repositioning in anticipation of a shift in strategy by 2008. Some of President Bush's zigs and zags in the past year, as he fought the Democrats' efforts to tie a troop-pullout deadline to the war-funding bill, have led him to accept some of the Iraq Study Group's proposals. In the beginning, the White House wasn't exactly crazy about the idea of imposing hard-and-fast progress benchmarks on the Iraqi government, something the Democrats insisted must be in the war supplemental. But as the battle intensified on Capitol Hill and in Iraq, the White House embraced the idea, after some language modifications.

These benchmarks, a key part of commission co-chairman James Baker's report, were one of the central reasons why Bush won in the end. They underscored U.S. demands that the Iraqis had to meet their obligations on troop recruitment, constitutional changes and political compromise to end the sectarian division that has badly weakened Prime Minister Maliki's government.

Another top commission proposal was to shift the U.S. military mission from one of frontline warfare to one of training and equipping and backing up a substantially larger Iraqi military. I suggested this in a column last year and predicted it would be the long-term role of the United States in a war that would last for a long time. Only Iraqis would be fighting and dying. The administration and U.S. military commanders have been sending increasing signals that the Iraq war is ultimately going to be won or lost by the Iraqis themselves. That means the role of American military forces will be to train them to fight a long war to preserve the freedom given when U.S. soldiers brought down Saddam Hussein's terrorist government.

Military-strategy papers talk of doubling Iraqi forces and providing them with the training, arms, armor and other equipment needed to overcome the terrorists. That is the direction toward which the United States is headed. Perhaps no proposal by the Iraq Study Group was more ridiculed by administration insiders than the idea of sitting down and talking with Iran. There was plenty of evidence Iran was aiding terrorist groups in Iraq, which the Iranians deny, but at the same time, Iran feared the war could spread throughout the Middle East and further destabilize the region -- something Iran does not want.

But as the situation deteriorated in Iraq earlier this year, war casualties mounted and the future of the Maliki government seemed bleak, the White House reluctantly warmed to Baker's proposal. Maliki had already entered into talks with the Iranians, discussing border control and security issues. The decision was made that the United States should join these talks, too, to see what came of them.

On Monday, U.S. ambassador to Iraq Ryan Crocker and Hassan Kazemi Qomi, the Iranian ambassador to Baghdad, sat down together at a meeting arranged by Maliki in his office in Baghdad's fortified Green Zone. Crocker, a realist who follows Ronald Reagan's Cold War admonition, "Trust but verify," said the two countries stuck to security issues but lowered expectations of any better relations. "Whether that will produce results is up to them," he told reporters.

Perhaps it is too early to say that benchmarks, a larger Iraqi army and negotiations with Iran will lead to a more stabilized situation in Iraq anytime soon. But it is clear the administration has begun a series of shifts in strategic planning it hopes will lay the groundwork for a winding down of our combat role and thus defusing the war as an issue in the 2008 election. For the time being, however, the administration's hopes rest with Gen. David Petraeus and whether he can reduce the violence in Baghdad and maybe elsewhere in Iraq to buy the United States time to change its mission. Petraeus will deliver his report to America this fall when it is hoped that enough progress has been made to give the administration the window of opportunity it now seeks.

"Petraeus doesn't have to produce a victory there, but he does have to show some form of improvement on the ground. The quality of life has to be better, not good but better," said Victor Davis Hanson, a senior military affairs analyst at the Hoover Institution.

Hanson is pessimistic about the possibility of our overcoming the kind of terrorism that can strike anytime, killing hundreds of people, and then disappear into the shadows to plot the next suicide bombing in a crowded mosque or market.

But an expanded Iraqi military, with the financial and arms support of the United States, could conceivably take over the brunt of the fighting and, with the right leadership, kill a lot of al-Qaeda terrorists.