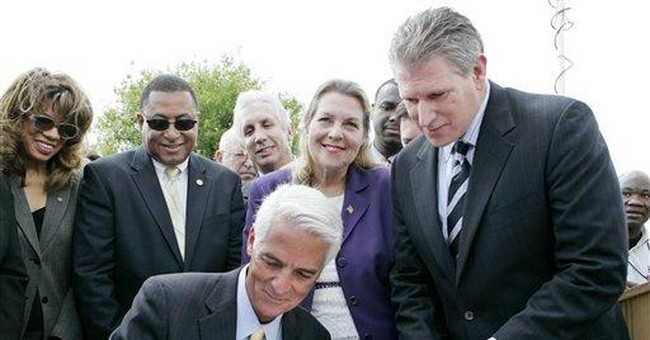 South Carolina Republican Chairman Katon Dawson isn't about to let Florida steal the political limelight from his state's Jan. 29 primary, so he's going hold it a week or two earlier.

Dawson's decision will preserve South Carolina's position as the first Republican presidential primary in the South, but it also will likely encroach on New Hampshire's guarded first in the nation primary that was tentatively set for Jan. 22.

But the internecine battles of the front-loaded primaries won't stop there. Iowa's caucuses, which kick of the 2008 presidential nominating race, are set for Jan. 14. Iowans may not want to let New Hampshire move ahead of them on the primary calendar, either.

The trouble started when the Florida legislature decided to move its primary up, making it the only megastate on the January calendar that has the electoral clout to heavily influence the presidential nominating process. That decision, signed into law last week by Republican Gov. Charlie Crist, ran into a hornets' nest in both parties, which prohibit any state from holding its delegate-selection contests in January -- except the four kick-off states of Iowa, New Hampshire, Nevada and South Carolina.

The Republican National Committee has threatened Florida's GOP with penalties that would cut its delegation to the national convention in half. The Democratic National Committee, as I reported earlier, is in negotiation with state Democrats on a date in February.

"We're working closely with the state party to look at the alternatives for proceeding in accordance with the rules on or after Feb. 5th," said DNC chief spokeswoman Karen Finney.

But South Carolina's GOP is one of only two state parties that can set its own primary dates, and last week Dawson told me "we are going to move our primary up accordingly before Jan. 29 to ensure that we are the first in the South."

That will create havoc with the other January players, but that doesn't bother Dawson, a tough-as-nails Southern warrior who is one of the longest serving GOP chairmen in the country.

"I'm not worrying about angering anyone else," he said. "Remember, this is a state that started the Civil War. We are not worried about offending any state. We're going to pick a date and let the chips fall where they may." Dawson knows that by violating the party's rules "we would lose half our delegates, but we are prepared for all that because this primary is important for South Carolina and for all Republicans."

Since 1980, no Republican has won the presidency without winning the South Carolina primary first and he's prepared to take any punishment to preserve that record.

How much effect the emerging primary scramble will have on the early January contests remains to be seen, and initially New Hampshire voting officials did not seem troubled by Florida's move to Jan. 29 -- presumably far enough away from their own exclusive Jan. 22 spot on the calendar.

"I understand why [Florida is] doing it and that's OK," New Hampshire Secretary of State Bill Gardner said last week, adding that he would wait until this fall to set an official date.

But Dawson's plan to move ahead of Florida would send it deep into the Granite State's near-sacrosanct domain. If there was any doubt about that, he sent this warning shot across New Hampshire's bow: "I'm sure they will have to move their date up," he told me.

This rescrambling of next year's primary calendar means several things will happen next year when the two major parties go about choosing their presidential nominees.

First, we will likely know who the nominees will be earlier than anyone previously thought. New Hampshire could schedule its primary right after New Years Day, if not earlier, weeding out the lower tier candidates still in the single digits. Iowa, in order to preserve its place at the head of the line, might hold their caucuses even earlier.

The identity of the clear frontrunners and likely nominees will probably come into focus by the end of January after Nevada, South Carolina and then Florida. Then comes the Super Primary on Feb. 5 when nearly two dozen states could hold their contests, providing a bonanza of delegate votes from megastates like New York and California that will all but nail down the nominations.

But what happens next? There will be the remaining mop-up work in the lesser primaries, followed by a long and costly dark time where the presumptive nominees must struggle to maintain visibility with very little to do until the late summer conventions.

Keeping their parties energized over this lengthy down time will be a challenge for any candidate, but especially the Democratic nominee who will have to endure a four-to-five month gauntlet of Republican attacks -- something the GOP is unusually good at. Ask John Kerry.

Maybe that's when the front-loaded primaries will not seem like such a good idea.