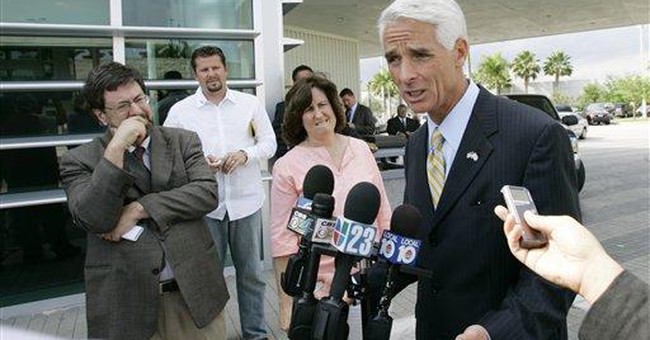 WASHINGTON -- Florida struck a blow for political freedom last week in a rebellion over who should be allowed to decide when a state holds its presidential primaries -- the parties or the voters' representatives.

At least that's the way the Republican-run Florida legislature and GOP Gov. Charlie Crist see the issue over which the two major parties threaten to punish Florida and the winners of next year's primaries if the state goes ahead with plans to hold its primary on Jan. 29.

The bill, which Crist will sign, would violate Democratic and Republican national party rules that prohibit any state from holding delegate-selection caucuses or primaries before Feb. 5, except the big four in January: Iowa, Jan. 14; Nevada, Jan. 19; New Hampshire, Jan. 22; and South Carolina, Jan. 29. In a growing wave of states that are holding their contests earlier than usual, Florida is elbowing its way into the front pack in order to influence the outcome of the 2008 nominating process.

The two parties want to apply the brakes to the front-loading movement, and their no-other-primaries-before-Feb. 5 rule would impose stiff penalties for any state that violates it -- including a 50 percent cut in its convention delegates.

But Crist thinks it's unfair to bar major states from entering the primary starting gate, saying this is really an issue of a state's democratic right to set its own calendar in choosing the parties' nominees. "It's important to have a mega-state weigh in early. Florida is a microcosm of America. It's a good bellwether of how America feels," the governor told the Washington Post last week. "Whenever someone tries to limit democracy, that's not good. ... We can all get caught up in rules and regulations," he said. "But this country is about freedom and democracy. 'Let freedom ring' is my feeling on this."

But the parties say "the rules are the rules" and democratic freedom has nothing to do with it.

"The rules are clear. Any state that chooses to hold its primary before Feb. 5 will be penalized. They will lose some delegates," said Republican National Committee representative Tracey Schmitt.

The Democratic National Committee and its chairman, Howard Dean, are standing firm, too, in the looming showdown.

"This is not the first time a state legislature has set its primary on a date outside DNC party rules. As with similar situations in the past, the DNC is working closely with the state party to look at the alternatives for proceeding in accordance with the rules on or after Feb. 5," said DNC press secretary Stacie Paxton.

One idea being floated by Florida Democrats, regardless of the state's primary law, would be to hold Democratic caucuses on Feb. 12.

But that would impose a huge financial burden on the party. While the state's taxpayers would pick up the costs of the Republican-engineered Jan. 29 primary, the state Democratic Party would have to pick up the estimated $6 million tab for the caucuses.

Florida Democrats, however, believe they can and will find a way around the state's Jan. 29 primary conundrum.

"The communication lines between our state and the national party are very good. There have been constant discussions. I'm optimistic things will be worked out," said DNC executive committee member Mitch Ceasar, who chairs the Broward County Democratic Party.

But the presidential front-runners have made it clear that no matter when the Florida primary is held, they will campaign there, even it means defying party rules that forbid such activity before Feb. 5.

"We don't really have a whole lot of say about how the primary schedule is set. All we can do is campaign wherever there is a primary or caucus, and that is what we intend to do," said a representative for Sen. Hillary Clinton's campaign.

"The DNC and the Florida state party will arbitrate this, and we will compete on the final field vigorously," said Bill Burton, chief spokesman for Sen. Barack Obama.

Still, Democrats smell a rat in the Republican legislature's decision to move their primary into January, forcing Democrats into retreating on the primary calendar, while the Republican candidates, presumably, would have the Florida primary stage all to themselves.

"Historically, we are in politically uncharted territory between the states and the national parties," he said.

But Florida's decision could have even wider repercussions on the shape of the primary calendar, triggering a domino effect among the other January state contestants. South Carolina could move its Jan. 29 primary up earlier, which, in turn, would force New Hampshire to preserve its first-in-the-nation primary by holding it right after the new year.

Florida Republicans seem prepared to fight for their right to choose their primary date right up to the convention. "Look for some big fights over seating its delegates," a Republican official told me.