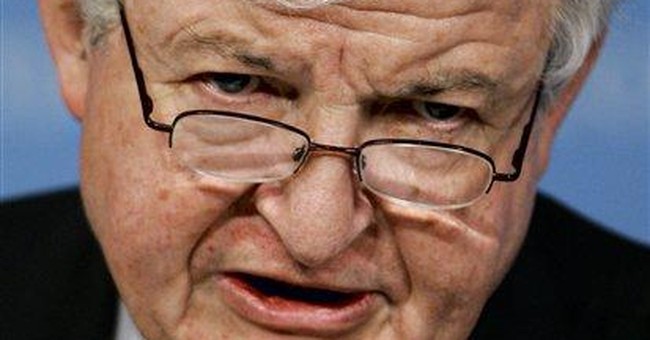 The world is in the midst of an economic boom that is raising living standards, creating jobs and improving the quality of life for billions of people.

That's not the story or picture we see on the nightly news shows, where the world is torn by civil war, terrorism, death, destruction and unending poverty. There is certainly much of that, but there is another compelling story that needs telling, too, because it has a lot to do with our economy and future well-being.

The past week's wealth-creating run-up in the stock markets, where the Dow Jones industrial average was breaking records and nearing 13,000, is the latest manifestation of the Bush economy's continuing strength and resilience. But its strong performance was also the result, increasingly so, of the global economy's growth -- from which we benefit as a nation of merchants and exporters selling our goods and services to the world.

"The good news on U.S. jobs highlights a welcome global phenomenon. Unemployment rates have fallen to lows in Europe, Japan, China, India, Brazil and many other areas," Bear Stearns economist David Malpass wrote earlier this month in The Wall Street Journal. "While the U.S. itself is less openly exuberant than in the 1990s, most of the world is much better off economically." But let's not sell the U.S. economy short. The unemployment rate has dropped to 4.4 percent, disproving gloomy forecasts it would rise. More of us are working at increased pay scales (the average hourly wage was up to $17.22), which has been the driving force behind the rise in consumer spending and increased investments.

The dark, almost hysterical predictions that the collapse of the subprime home mortgages along with the decline in the housing market generally would send the economy into a recession have not born out. And the global economy's growth, denied by economic nationalists and leftist ideologues who see it as an evil force of exploitation and poverty, is helping us weather our housing and construction downturn.

Among the best-performing stocks last week were Caterpillar and other heavy earth-moving machinery corporations -- who turned in higher-than-anticipated quarterly earnings reports. The reason: record sales overseas from Asia to South America, which are in the midst of building booms.

Thus, while construction equipment sales were falling here because of a downturn in new housing starts and construction generally, they were booming globally: boosting profits and jobs here at home and benefiting working class 401(k) buy-and-hold investment portfolios.

Other industries were also benefiting from global expansion and sales growth abroad. Boeing was selling jet planes as if there was no tomorrow to economic powerhouses like China, accounting for a large part of the Dow's upsurge. Beverage companies like Coca-Cola were reporting higher revenues, largely on overseas sales. GM's best-selling car in China was the Pontiac. The list is long and growing.

Global growth only begets more growth if the right economic policies are being implemented, said Malpass in an analysis that was far ahead of his many economic colleagues on Wall Street.

"The sea change in global conditions toward fuller employment has profound implications. This is an opportunity to build on success rather than dwell on U.S. recession odds," he said.

Developing countries could boost their housing stocks by stabilizing their currencies and privatizing their banking systems, thereby attracting foreign investment to drive mortgage finance. Countries such as Brazil, India, and others still need to overhaul their anti-growth tax systems. Mexico can take a major leap forward if it further privatized its economy, using global liquidity to expand housing and raise living standards.

Meantime, the story of the global boom is not getting the respect and attention it deserves from a news media that sees only global imbalances, trade deficits, debt and poverty.

Quite the contrary, a worldwide economic revolution is fully under way, and America is its leader and one of its chief beneficiaries. "The global economy is adding more to jobs, output, literacy and government tax receipts than ever in its history," Malpass said.

All of this global growth has not hurt us; it has strengthened us, giving consumers more choices, boosting competitiveness and giving American companies stronger consumer markets in which to sell our goods and services. Last year, the American economy grew more than 3 percent (the same as the year before), lifting our gross national product to more than $13 trillion a year. Export sales rose to more than $1.3 trillion and climbing.

The nightly news shows won't report any of this because they think only bad news sells. But they're missing a story of monumental importance about America's central role in the growing wealth of nations that is lifting the global economy to a new level of prosperity that benefits us all.