Democrats fiddle while the world burns 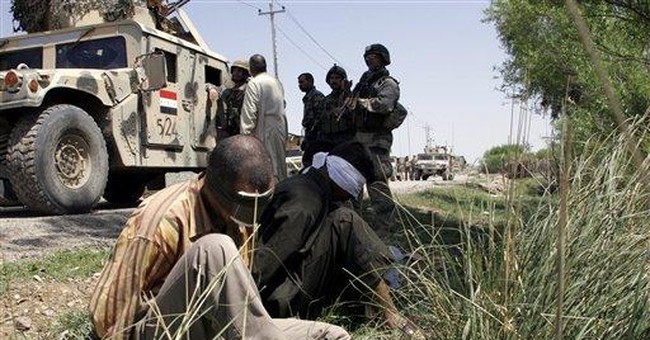 The Democrats who say they're in no rush to approve emergency funding for our troops in Iraq and Afghanistan, may be digging themselves into a hole in the global war on terrorism.

It is an axiom of American politics that whatever divisions there may be in our electorate over the war, a majority of voters want their government to stake out strong, unequivocal positions on national security. There can be no "maybe" in our collective voice to defend our country and our allies.

But the Democrats have been sending increasingly disturbing signals of weakness, doubt, division and fear in their actions lately that may come back to haunt them in the 2008 elections. A few examples:

-- They took off for an Easter spring break two weeks ago, leaving the unfinished troop-funding bills on the shelf while our soldiers were fighting and dying in the war on terrorism.

Democratic leaders maintained that our troops were in no danger of running out of needed arms and armor, but the military said otherwise. That's why the administration labeled the funding request an "emergency." Whatever your position on the war, Americans want to make sure our forces have everything they need to defend themselves and kill the enemy in battle.

-- Before leaving town, Democratic leaders also sent word they were no longer going to use the words "global war on terrorism" -- the term the administration uses to describe the war we, and our allies, are fighting. But if anyone needed fresh evidence we are in the midst of a truly global war against radical Islamic terrorism, it was provided in blood and body parts last week in two countries on the continent of Africa.

Al Qaeda's new wing in North Africa bombed the prime minister's office in Algeria Wednesday, killing more than two-dozen people and wounding more than 200 others. The day before, terrorists in Morocco blew themselves up in a battle with police.

The group claiming responsibility for the bombing in Algiers calls itself "Al Qaeda in Islamic North Africa," an arm of a growing Al Qaeda network that has struck in several European countries. There were the bombings in Great Britain; the train bombings in Madrid, Spain, where 191 were killed and 1,800 injured; the bombing of a Tunisian synagogue that killed 21 and numerous other attacks throughout the Middle East and in Asia; the 9/11 attacks in the United States; and now last week when Al Qaeda was opening up a new front in North Africa.

If this is not a global war on the civilized world, what else would you call it? If Democratic leaders have a problem with this term, they have a serious problem understanding the terrorist threat that faces us here and abroad. And that threat is getting worse. The attacks in Algiers, the deadliest in the region since 2002, when bombers killed 38 people and wounded 80 others, sent new signals that "Islamic fighters were regrouping," said an Associated Press dispatch. It called the attack on the prime minister's office "the most brazen attacks in Algerian history."

That raised new global-security concerns in Europe. "Could Europe, just a boat ride across the Mediterranean, be next?" an AP dispatch out of Paris asked last week.

But is any of this registering on Democrats who are bent on passing an emergency supplemental appropriations bill for the troops that tells these terrorists the date on which we are going to quit Iraq?

Last week's Al Qaeda attack on the Iraqi parliament building was a fresh reminder of what awaits the Iraqi government and its civilian population if we pull out and let the terrorists take over, seizing the rich oil fields that will give them renewed resources to threaten us with biological, chemical and perhaps nuclear weapons.

All of this makes the Democrats' arguments of the past about the nature of the terrorist threat seem even more ridiculous now than it seemed back then. Last year, and well into this year, Democratic leaders argued that we should be focusing on only one country -- Afghanistan. That is where the real terrorist threat is, Nancy Pelosi and John Kerry have said, not in Iraq, which they dismissed as a civil war and hardly a serious front in the battle against Al Qaeda.

But it turns out that Iraq is now a central breeding ground for Al Qaeda, as are the neighboring countries of Iran and Syria, which has been arming, training and financing the terrorists.

Last week, the U.S. command in Iraq said Iraqi militia fighters were being trained in Iran in the manufacture of armor-piercing roadside bombs (EFPs, or explosively formed penetrators) to kill American soldiers.

In a briefing in Baghdad last week, U.S. military spokesman Maj. Gen. William Caldwell told of the Iranian role in the latest attacks on our forces: "We know that they are being in fact manufactured and smuggled into this country, and we know that training does go on in Iran for people to learn how to assemble them and how to employ them."

But while Caldwell was revealing how Iran was helping the terrorists in Iraq, House Speaker Pelosi and Senate Democratic Leader Harry Reid were on Capitol Hill saying they had no problem with lawmakers traveling to Iran and talking with their leaders.

Such is the mind-set of the present Democratic leadership in the midst of the global spread of terrorism that threatens all of us, now more than ever.