Retirement plan could prove a winner 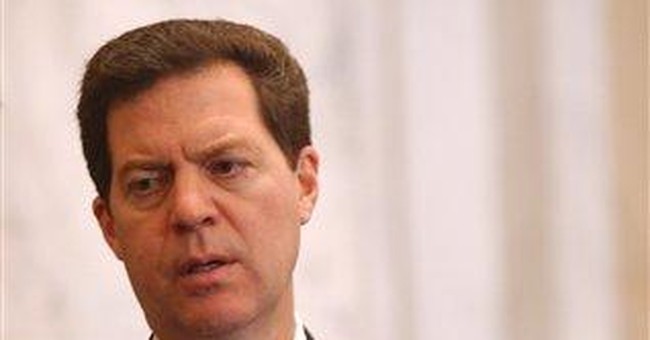 WASHINGTON -- Democrats did a skillful job of demagoguing President Bush's plan to let workers invest some of their Social Security taxes, but now another idea is waiting in the wings that could be far more popular.

The core of Bush's retirement-investment plan was to provide a way for low- to middle-income Americans to build wealth over their working years by taking advantage of higher-yield, diversified, blue-chip stock and bond funds that wealthier people enjoy.

Democratic leaders and the powerful AARP lobby persuaded voters -- especially older Americans -- this was a risky idea that would destroy Social Security.

But the members of Congress who rejected Bush's plan have their own gold-plated government pension plan that allows them to invest in stocks and bonds, which most of them do. And no sooner had the AARP killed Bush's proposal with a fear-mongering TV ad campaign, it offered stock and bond investment funds to its members. So much for a risky scheme.

Someone will resurrect Bush's proposal in the years to come to save the Social Security system from bankruptcy, but in the meantime, there is another retirement-savings plan percolating here that may prove to be a winning issue in the 2008 election.

This idea, promoted by the conservative Heritage Foundation and the liberal Brookings Institution, is aimed at millions of lower-income workers who do not have access to 401(k) retirement plans because their small-business employers do not offer them or any other types of employer-sponsored plans.

Their strategy is "to make saving more automatic -- and hence easier, more convenient and more likely to occur," the think tanks said in a joint paper outlining the plan. It is based on the same strategy that has led to the success of 401(k)s.

But of the 153 million working Americans, 71 million "worked for employers that did not sponsor a retirement plan of any kind, and another 17 million did not participate in their employer's plan."

Enter Mark Iwry, a senior fellow at Brookings, and David John, senior fellow in retirement issues at Heritage, with what they call the "automatic IRA." It would enable workers in small businesses who have no employer-sponsored plan to put aside regular savings in an IRA through the power of the automatic payroll-deposit system used by 401(k) plans.

"In short, the ultimate goal is to give workers access to retirement savings in every job they hold," Iwry and John wrote in their paper.

"Under our proposal, a business that isn't ready to adopt a 401(k) or other retirement plan would simply offer its employees the chance to contribute to an IRA every payday by direct deposit, in much the same way millions of us have our paychecks deposited directly into our bank accounts. It's easier to save small amounts on a regular basis. And once payroll deposits begin, they continue automatically and accumulate tax-free," they said.

Significantly, employers could make participation automatic when they hire workers so that they would begin making regular payroll contributions unless they formally ask to opt out.

Two major design factors promise to make this idea popular with both businesses and workers.

The first is that the plan would result in little or no cost to employers who would be exempt from costly rules and regulations that govern 401(k)s and other retirement plans. Businesses would be offered a tax credit in the first two years to encourage them to offer such plans and help them adjust to any administrative costs.

The second is that it would principally benefit moderate- to lower-income workers -- the 58 percent of the workforce that does not participate in any retirement plan, people who tend to have less education, do not save on a regular basis and usually work for small businesses.

"These families have the greatest need to save more to achieve retirement security, but their low tax brackets mean they benefit little, if at all, from the tax incentives provided under the current system," the authors said. None of this is meant to replace existing tax-free savings plans, but it would "fill in the coverage gaps around employer-sponsored retirement plans" and set the stage for small businesses to "graduate" to full-fledged retirement plans that they would sponsor.

The savings rate in our country, especially among this large uncovered part of the workforce, is abysmal. This would dramatically turn that rate around, helping millions to build wealth and some measure of retirement security. Moreover, this plan would not face the bitter opposition that killed the president's Social Security reforms. The AARP has endorsed it, and it is beginning to pick up bipartisan support in Congress, too.

To paraphrase Mark Twain's admonition about the weather, everyone complains about the savings rate but no one does anything about it. The automatic IRA is a way to begin fixing that problem efficiently and effectively for tens of millions of workers.