Her aura of invincibility is fading fast 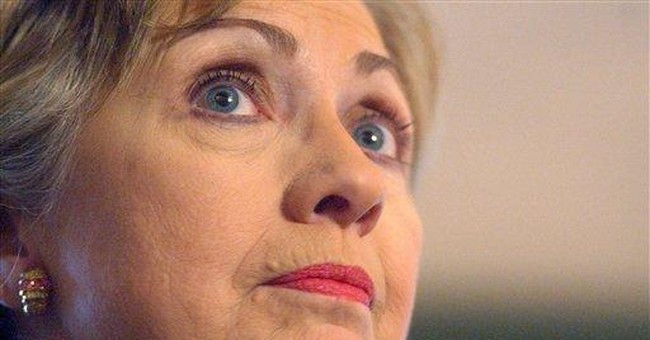 WASHINGTON -- Sen. Hillary Clinton's declining support in the New Hampshire Democratic primary sent shock waves through her party last week, but one set of troubling numbers stood out over all the others.

The closely watched Granite State Poll, conducted by the University of New Hampshire, found the number of likely Democratic voters who viewed her favorably had plummeted this month to 64 percent, from 74 percent in February. Equally ominous for Clinton's nomination prospects, her unfavorable score shot up to 24 percent, from 15 percent.

Her rising unfavorables among rank-and-file Democrats, together with her declining approval numbers from independents and liberal activists, drove her overall support down to an anemic 27 percent (from 35 percent in February). It is still early in the Democratic presidential race, with nine months to go before the New Hampshire primary in January, but clearly the aura of Clinton's invincibility was dissipating. Former North Carolina senator John Edwards and Illinois Sen. Barack Obama were breathing down her neck and in some polls had all but caught up with her.

Edwards, the Democrats' 2004 vice-presidential nominee, was running just six points behind Clinton in the Granite State, a margin that pollsters said had turned the first-in-the-nation primary race into a statistical dead heat.

At 20 percent in the latest state polls, Obama was running virtually even with Edwards. But his meteoric candidacy shot up to a higher orbit last week after he announced he had virtually matched Clinton dollar for dollar in the all-important money-raising game.

It is dangerous to draw any firm conclusions from a single state poll, but there were other independent surveys that supported its findings. Pollster John Zogby reported slightly differing numbers that showed Clinton leading by 29 percent but still only narrowly ahead of her two chief rivals who were in second place with 23 percent each. Zogby's analysis: The contest had finally turned into "a three-way race for the party's nomination."

Clinton's biggest weaknesses, Zogby found, were among independents and liberal, largely antiwar activists who were increasingly turned off by her more hawkish views on the Iraq war.

Edwards led among independents with a solid 33 percent, compared to 26 percent for Obama and only 19 percent for Clinton. Obama, on the other hand, crushes his rivals among liberals and so-called progressives with 43 percent support, compared to 17 percent for Edwards and only 16 percent for Clinton. Not too many weeks ago, Democratic officials in New Hampshire saw the former first lady as the candidate to beat. Not any longer. "This race is tightening, and it's up for grabs," state Democratic chairman Ray Buckley told me. "No one should be counted out right now," he said of the three front-runners.

Still, Clinton remained at the head of the pack in the national numbers. She led her two main rivals by an average of 10.7 percentage points in six national polls monitored by the Real Clear Politics Web site last week.

But a recent American Research Group poll showed her in a dead heat with Edwards in Iowa, scene of the nation's first nominating caucuses, where support for an immediate troop withdrawal from Iraq was intense and where his economic-populist message plays well among the state's strong labor-union base.

Edwards, perhaps the best orator in the race, is betting that a victory there would give him enough momentum to overtake Clinton in New Hampshire, a state long known for upsetting party front-runners.

Yet another strategic element in the emerging stop-Hillary movement was the breathtaking $25 million that Obama reported raising in the first quarter, nearly matching Clinton's $26 million take. The sheer size of his war chest was impressive enough, but it was the 100,000 donors -- twice that of Clinton's contributors -- that was the buzz of the party last week.

Suddenly, Obama and Edwards showed they could go the distance with Clinton and they had enough money and structural party support to take them into next year's costly front-loaded primaries.

All of this raised renewed questions about the real depth of Clinton's support in her party, which many strategists believe is broad but not very deep. "Hillary's support is one layer of a rock-hard base, covered by layers of shifting sand," said Democratic media strategist Bud Jackson. "The big question that looms is how much lower can Hillary's numbers go before they bottom out at her level of rock-hard support."

Last week's numbers showed "that Hillary does not have the nomination locked down," Jackson told me.

Privately, other Democratic campaign advisers agree. Many say that if the race were between Clinton and one of her two rivals, she would likely overwhelm him. But against two popular, well-financed Democrats, both of whom can outperform her on the stump, it is a different matter altogether.