A game of chicken, with a side of pork 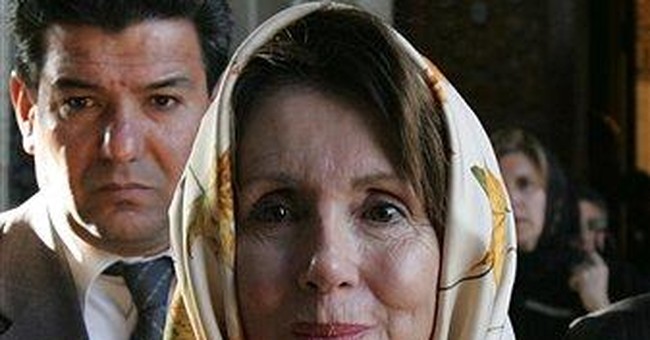 WASHINGTON -- If you're wondering what happened to all that sound and fury from the Democrats over its troop-withdrawal bills, they took off for an Easter break, leaving their unfinished business behind them.

Speaker Nancy Pelosi was touring the Middle East, pretending to be Secretary of State. Sens. Hillary Clinton and Barack Obama were off in search of more campaign money to bankroll their presidential ambitions. Most of the other Democrats were back home boasting about all that pork they stuffed into the emergency defense supplemental bill that is supposed to provide money just for our troops in Afghanistan and Iraq.

Some emergency. The differing versions will have to be reconciled in a House and Senate conference before a final vote takes place sometime after the "we're in no hurry" Democratic-run Congress gets back from its spring vacation.

U.S. military commanders in charge of the war say they will be running out of funds by the end of April at the earliest or by June at the latest. But Senate Democratic leader Harry Reid is in no rush, pointing to a dubious Congressional Research Service report that says the military doesn't need new funding until July. Tell that to the troops who know otherwise.

But the final bill that emerges from conference isn't going anywhere. It will be vetoed by President Bush, as he has warned early on, and that will mean the Democrats will have to start over with yet another emergency bill that could take weeks more.

If all this sounds like deliberate legislative stalling and foot dragging by the Democrats on funding the war and our troops, that's exactly what it is. They acknowledge they do not have the votes to cut off funds for the war, despite their majority in both houses of Congress, so they are doing the next best thing -- delay the money as long as possible.

House Ways and Means chairman Charlie Rangel shot down a funding cutoff on "Meet the Press" Sunday when Tim Russert asked him, "If you want to stop the war, why not just simply cut all funding?"

"Because you don't have the votes to do it. There's some people who believe that if you cut all the funding off, you leave our soldiers and military people exposed," Rangel replied.

He even admitted Democrats originally didn't have the votes for the bill that eventually passed in the House. Pelosi and other Democratic leaders stuffed it with $20 billion worth of pure pork "because they needed the (Democratic) votes," Rangel said.

"That bill, we lost so many Democrats because people thought we went too far and others because we didn't go far enough," he said.

So there you have it, folks, the central principle behind how Democrats intend to govern the nation's business. Pass bad legislation by loading it up with wasteful pork-barrel spending to buy enough votes from members of their own party.

But, pork-barrel bribes aside, if there was any legislation that deserved to be vetoed, this is certainly it.

It would set a specific troop-withdrawal deadline that has the terrorists in the Middle East cheering. It contains a thorny bureaucratic thicket of impossible-to-meet rules on troop training, rotation and deployment that would hamstring our military and endanger our troops on the ground.

"The terrorists have already marked (the withdrawal deadline) on their calendars," said Senate Republican leader Mitch McConnell of Kentucky.

But even the Democrats know they can go only so far in their delaying tactics before voters will turn on them for playing politics with the lives of our soldiers and they said as much this week.

"If Bush vetoes an Iraq war spending bill as promised, Congress quickly will provide the money without the withdrawal timeline the White House objects to because no lawmaker wants to play chicken with our troops," Obama told the Associated Press.

"Ultimately, politically, we have to give him (the) money," Rangel said. The White House knows it is operating from a position of strength in the current war-funding standoff. No matter how far Democrats go in pressing their antiwar efforts, they are not willing to cut off funds for the troops and the war.

When Reid this week signaled he was ready to support a much tougher war-funding cutoff bill if the timetable legislation was vetoed, the White House sent out a statement the Nevada Democrat made last Nov. 30. "We're not going to do anything to limit funding or cut off funds," he said at the time. Reid was also one of 96 senators who voted last month for language that pledged Congress would never pass legislation "to undermine the safety of the Armed Forces of the United States or impact their ability to complete their assigned or future missions."

So when the showdown is over and Bush's veto is upheld, Congress will approve the money, buying our troops and the Iraqi military more time to stabilize and strengthen Baghdad for the longer struggle ahead.