Hillary's dialing all the wrong numbers 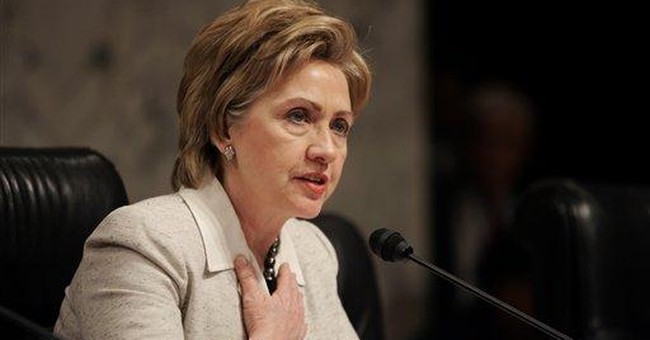 Buried within a recent presidential-preference poll that asked voters who they would never vote for, an unexpectedly large number gave an emphatic thumbs-down to Democratic front-runner Hillary Clinton.

A national poll of likely voters by independent pollster John Zogby found that nearly half (46 percent) said they couldn't vote for the former first lady under any circumstances. That is certainly a huge portion of the American electorate, which will no doubt feed growing doubts in her party about the New York senator's electability. But another number was even more disturbing to senior advisers in her campaign.

Zogby found that among likely Democratic voters, 18 percent said they "would never cast a vote in Clinton's favor."

That such a large percentage of overall voters would flatly express an aversion to electing her president was troubling enough to top Democratic officials. But that she appeared to be losing support within the base of her own party set off alarm bells among her high command.

The 46 percent of overall voters "includes a significant number of Republicans, conservative-leaning independents, liberal anti-war people who don't trust her, plus those who don't like her for a number of reasons, including those who consider her polarizing or feel she can't win," Zogby told me last week.

"If there's 46 percent who say never, then there are the rest of the voters who can be drawn from. But when I see 33 percent who say they could never vote for Barack Obama or John Edwards, and even Al Gore has less than that, then there is a problem with her and her campaign," he said.

The 18 percent figure surprised Zogby. "That is nearly one in five Democrats. The parties are at parity, which means she's going to need 85 percent support among Democrats," he said. Losing 18 percent of the Democrats means she would fall short of the minimum support needed to clinch the presidency.

"Typically, when a candidate loses more than 12 percent of the base, they tend to lose," he continued. "If it was 12 percent, I wouldn't be overly concerned. If it gets around 15 percent, there are enough Democrats who would hold their noses, cover their eyes and vote for Hillary on Election Day."

But beyond that number, should it continue to hold up, "it is very difficult to win," he said.

However, Zogby's poll also showed that 19 percent of the Democrats said they could never vote for Obama, her closest rival for the nomination, or for Edwards, both of whom are in the top tier.

None of this means Clinton can't win back some of the doubters, but the pre-primary calendar is growing shorter and she will have to turn things around well before the January-February primaries and caucuses.

"It doesn't mean she can't turn it around, but she is going to have to do it very quickly. I would say by November because of the number of early primaries and caucuses," Sarpolus told me.

"Around December, voters attitudes begin to settle in and harden," he said. But in an era when presidential campaigns are moving at an ever-faster pace, the early outline of the 2008 election contest is beginning to take shape.

Clinton retains her party front-runner status, despite her deep polarization of the electorate, while former New York City mayor Rudolph Giuliani is leading all of his rivals by increasingly larger margins.

But at this point in the run-up to the two-month primary sprint, virtually all the major general-election-matchup polls show Giuliani beating Clinton. A March 2-5 American Research Group poll shows him ahead of her by six points.

Two major factors are in play here. One is the battle between Obama and Clinton and the other is the intensity of opposition to Clinton among her party's anti-war voters.

Recent surveys show Obama closing fast on Clinton in the national polls. He trails her by a scant 34 percent to 31 percent in the ARG poll. But nominations are won in state-by-state contests where delegates can be apportioned under different formulas.

In Michigan's Democratic primary, for example, "Hillary right now is kicking butt," Sarpolus told me. But in his latest general-election-matchup survey against either Giuliani or John McCain, "it's neck and neck."

What all of this says at this juncture is that, despite the political woes of war and scandal that Republicans have on their plate, the GOP is still very much alive and kicking in the 2008 race for the presidency.