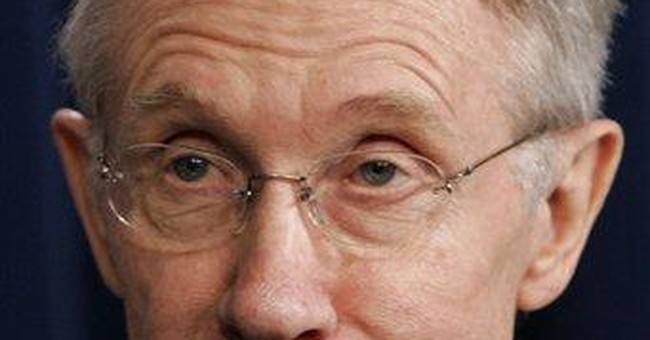 House Democratic leaders want to add $24.6 billion to President Bush's $95 billion request for U.S. troops in Afghanistan and Iraq, but it's not for more weaponry or life-saving armor.

Most of the added money stuffed into the emergency supplemental bill, which was expected to come up for a vote this Thursday, is for the kind of costly, pork-barrel, special-interest, vote-buying handouts that Democrats promised they would end if they won control of Congress.

But less than three months after taking over the House leadership, the Democrats returned to the old logrolling practice of buying votes for a bill whose micromanaging war provisions to ultimately defund our troops has raised deeply troubling doubts in the minds of many of their members.

The bill contains $25 million in subsidies for spinach growers hurt by last year's E. coli outbreak to persuade Rep. Sam Farr, D-Calif., to hold his nose and vote for it. There's another $75 million "to ensure proper storage for peanuts" to convince three conservative Democrats from Georgia to do likewise.

Other doubting Democrats were offered $1.48 billion for livestock ranchers, plus $20 million to reclaim damaged farmlands, $500 million for "urgent wildland fire suppression" and $120 million for shrimp and Atlantic fishing interests.

With so much at stake in the latest attempt to reduce the violence in Iraq and give the Iraqi government time to regain some semblance of control over the country, the spectacle of Democrats using a war-funding bill for pure political vote-buying pork was sickening.

"The war supplemental legislation voted out of the Appropriations Committee last week was an exercise in arrogance that demonstrated the utter contempt the majority has for the American people and their hard-earned tax dollars," said Rep. John Shadegg, R-Ariz.

"We are at war with a ruthless global terrorist network, yet the appropriators allocated hundreds of millions in funds to gratuitous pork projects," he said.

The opening paragraph on page two of the bill begins this way: "Title I -- Supplemental Appropriations for the Global War on Terror Chapter 1, Department of Agriculture Foreign Agricultural Service."

"Forget the Marines; send in the meat inspectors," the Wall Street Journal said in an editorial titled "'Peanuts' for (David) Petraeus,'" the commander of U.S. forces in Iraq.

The political rationale behind the Democrats' pork-barrel gambit was the difficulty of coming up with a 218-vote majority in the House where many in their party were squirming over the prospect of imposing a complicated obstacle course of "benchmarks" that could force a U.S. pullout to begin within 180 days.

But even if Speaker Nancy Pelosi and her anti-war aide-de-camp John Murtha were able to come up with 218 votes, it's doubtful the bill would have any chance of passing the Senate, where Democrats have been unable to move any pullout legislation.

Last week, Senate Democratic Leader Harry Reid couldn't even cobble together a simple majority for a bill that would set a deadline for U.S. troop withdrawal that faced a certain veto from Bush.

All of this is taking place against some early, anecdotal signs that troop reinforcements are having an impact at reducing the violence in Baghdad. And this is happening with only the first installment of the additional 21,000-plus combat forces that will be in the Iraqi capital by June.

U.S. officials in both parties sent over by the administration to assess the war have been returning home with a more positive outlook for Bush's new strategy there. "I got a sense in Baghdad in particular that with the additional checkpoints ... they're already seeing a difference on the ground," said Democratic Gov. Janet Napolitano of Arizona.

The decision by Shiite death squads to halt their role in the sectarian violence, at least for the time being, has also contributed in large part to the reduction in violence there.

The increasing role of the expanded Iraqi military in the house-to-house searches are also welcome dividends from the past three years of training that has been accelerated under the new plan. They are going to become a much more lethal force in the months to come, in part due to $3 billion in additional weapons we will be selling them.

The commonly voiced complaint by an assortment of pundits and armchair generals here is that "there are few options left in Iraq." But I'm not sure that is entirely true.

If the situation on the ground can be improved in the neighborhoods and streets of Baghdad, the Iraqi government will get the political breathing room it needs to build security forces and a governing infrastructure.

The stronger the Iraqi government becomes, the less chance insurgents have of making any significant long-term gains to bring down the country's democratic movement.

Meanwhile, the dispirited Democratic leadership in Congress is betting that the Iraqis will eventually lose their fight to be free. I'm betting that with our support, they can win.