'She can lose the nomination' 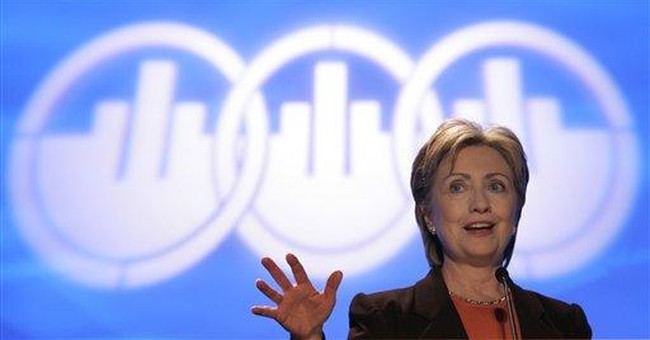 WASHINGTON -- It is the subject of increasing backroom discussion among Democratic officials and strategists on Capitol Hill and the party's rank-and-file forces at the grassroots.

The "it" is Sen. Hillary Clinton's questionable electability and whether Democrats will end up picking someone else next year -- someone much less polarizing -- to be their presidential nominee.

At the outset of this two-year election cycle, few Democratic strategists, except perhaps those among her rivals for the nomination, were willing to entertain the notion that she could stumble and lose her front-runner status. But that reluctance has given way to a growing belief in the party that she is now more vulnerable to being overtaken by one of her chief opponents in the race.

"Yeah, I think she can lose the nomination," said David Sirota, a skillful Democratic campaign consultant who thinks Clinton's candidacy is showing clear signs of weakness and is in danger of being passed by Sen. Barack Obama, or possibly former North Carolina senator John Edwards, in early caucuses and primaries.

"Hillary's problem is that her presidential campaign is not about anything but Hillary," Sirota told me.

"If I were her, I'd worry about the Iraq war and working-class economic issues. If she's got Obama hitting her on the war and Edwards hitting her on both the war and economic populist issues, that could hurt her," said the election strategist who helped engineer last year's primary upset by anti-war insurgents in Connecticut that nearly cost Democratic Sen. Joe Lieberman his Senate seat.

Clinton's best chance to secure the nomination is to have the broadest field of candidates possible who will divide and weaken her opposition, he said. "But if it's her versus just Obama or Edwards, or both, that's really dangerous for her."

Other Democrats I have talked to lately, mostly on background, are also questioning her political viability over the next 10 months after her sharp decline in Democratic voter-opinion polls.

"To go from 43 percent in January to 34 percent Democratic support in February this early in the nominating cycle is a sign of serious weakness for a front-runner that is feeding doubts about her party's grassroots," a prominent Democratic media adviser told me.

And it isn't just Democratic strategists who are saying this. Top political pollsters are also picking up signals that her eroding electability is fast becoming a troubling issue among Democrats who see 2008 as their best chance to win back the White House -- with a stronger candidate.

A Gallup poll reported last week that "Americans are closely divided in their view of whether Clinton or Obama has the better chance of being elected, with 50 percent choosing Clinton and 45 percent choosing Obama."More importantly, perhaps, Gallup found that independent voters, the fastest-growing segment of the nation's electorate, were "split down the middle" between the two major rivals when asked to appraise their electability.Clinton's erosion has been nothing short of astonishing in the past week, though the campaign press has been slow to focus on it. Indeed, they've gone out of their way to ignore it.

Remarkably, Obama trailed her by a mere 8 percentage points among Democratic voters nationwide in last week's NBC/Wall Street Journal poll, and by a razor-thin 3 points in an American Research Group poll of likely Democratic primary voters.

Edwards, too, is showing considerable strength in the early caucus states of Iowa and Nevada where his sharp-edged, populist message is electrifying working-class and union audiences.

Clinton's early head-to-head general-election numbers do not look good for her, either. She was trailing Republican front-runner Rudy Giuliani by an average of 5 points in all the major matchup polls of the past two weeks.When did the Clinton political restoration campaign begin to falter?

Democrats said in interviews last week that a critical factor contributing to her decline in the polls was her unwillingness to apologize for her vote for the Iraq war and admit it was a mistake.

"Her Iraq war vote is coming back to haunt her. She's said everything except that she made a mistake. Voters see this as Hillary wanting it both ways," said pollster Del Ali of Research 2000.

But entertainment mogul David Geffen's bitter broadside against her ultimately triggered the slide. The former Clinton moneyman, who is now backing Obama, was the first Democratic funder to attack her character and question her electability. But Clinton counterattacked with a vengeance, against Obama, not Geffen.

The fierceness of the attack by her top aides "knocked Hillary off her presidential pedestal and hurt her," said a Democratic pollster.Still, she remains the front-runner, though just barely. The chances are that Obama and Edwards are only going to get stronger as they continue to pound their anti-war, populist message, while Clinton struggles to figure out what her candidacy stands for apart from electing the first woman president.