Twists and turns on the road to the White House 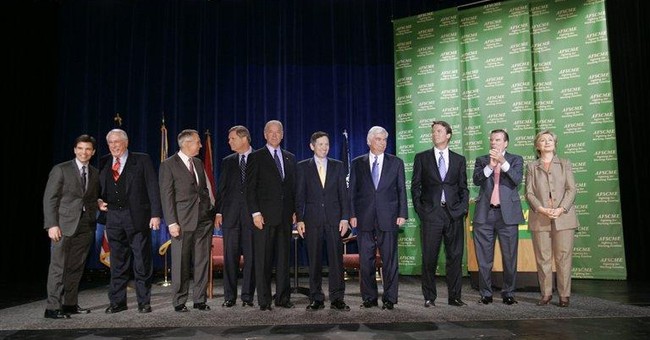 The conventional wisdom among the political pundits is that the Democrats have a strong advantage in next year's presidential election because of the Iraq war and President Bush's unpopularity.

But there are reasons why the conventional wisdom may be wrong, or least very premature. Not only are the Democratic front-runners burdened by some heavy disadvantages, the Republican presidential race is taking a number of surprising twists and turns that may trump the Democrats' bid at several strategic levels in this accelerated 2008 campaign cycle. Let's take these one at a time.

It doesn't get much attention in the news, which is all polls, pretension and self-promotion at this point, but the Democrats' front-runners come with a lot of troubling baggage of their own making.

Let's start with Sen. Hillary Clinton's surprisingly early decline in the polls among Democratic voters. A Fox News survey of registered voters showed her support falling to 34 percent, down from 43, at the hands of a rookie candidate, freshman Sen. Barack Obama. A Wall Street Journal-NBC News polls shows Obama nearly within single digits of the former first lady.

She is still the front-runner, but she has the highest unfavorables of any major candidate in her party. Nearly half of all voters would not consider voting for her under any circumstances. Negatives this high underscore why her support has been eroding as Democrats question her electability. Key Democrats say privately that she may not be the nominee of her party.

But if Hillary has a severe likeability deficit, young Barack Obama has an even larger problem. Will voters put someone in charge of the country with little or no executive or legislative experience, with only two years on the job? Former North Carolina senator John Edwards, also just a freshman, suffers from the same weakness.

The surprising new direction in the Republican presidential race:After two decades of conservative dominance, Republicans could well choose former New York City mayor Rudolph Giuliani as their nominee. He poses huge problems for the party's social-conservative wing, but his meteoric rise in the GOP's presidential-preference polls has made him the clear front-runner.

The GOP race is still open, but with Sen. John McCain going down the tubes faster than you can say Howard Dean, and Mitt Romney still having to show he can break out of single digits, Republicans seem to be on the brink of breaking with their past -- choosing a candidate who is a rock-rib conservative on defense and economic issues, but moderate to liberal on social issues.

If that happens, the electoral map could be dramatically redrawn. Many of the Democrats' bluest states in the Northeast will suddenly be up for grabs, like New Jersey, Pennsylvania, Connecticut and, maybe, New York. This is not a scenario the Democrats ever envisioned happening.

The next two years could result in some changes that would defuse the Democrats' most lethal political weapon. Bush's reinforcements may well reduce the violence in the Iraqi capital, while the Iraqi military grows more forceful -- allowing some U.S. troop reduction by then.

Setting aside the war for the moment, will the terrorist threat become a bigger issue in next year's elections?

If another plot against the United States is foiled, it will remind voters the extremist Islamic threat remains as deadly as ever and that plays to the Republicans' strength and the Democrats' weakness on national-security issues.Will Democrats fail to get anything done in Congress over the next two years? And who gets the blame for that?

Voters next year will not be able to blame everything on the GOP this time because the Democrats are in charge and failure to produce any meaningful legislation by mid-2008 won't help their prospects in the fall.

Thus far, their legislative scorecard is getting a failing grade. They have not been able to craft a consensus on the Iraq war that satisfies their antiwar, pacifist base. The possibility of a compromise budget appears dim. And their first major bill out of the box was a minimum-wage hike that will reduce entry-level jobs and raise taxes on middle-class entrepreneurs who are starting their own businesses.

Finally, there's the unexpected blunder. Call this the McGovern-Mondale-Dukakis-Kerry Syndrome. Let's face it: There is a reason why the Democrats have lost seven out of the last 10 presidential elections.

Voters have long distrusted the Democrats on national-security issues, and their opposition to combating terrorism at its breeding grounds and calls to cut funding for the troops further feeds that mistrust. Democrats tend to propose raising taxes as the solution to almost everything, and Clinton, Obama and Edwards are doing that again. Most voters think they already pay enough taxes.

So there are plenty of reasons to question the conventional wisdom in this election period. The Democrats have a lot of obstacles ahead of them.