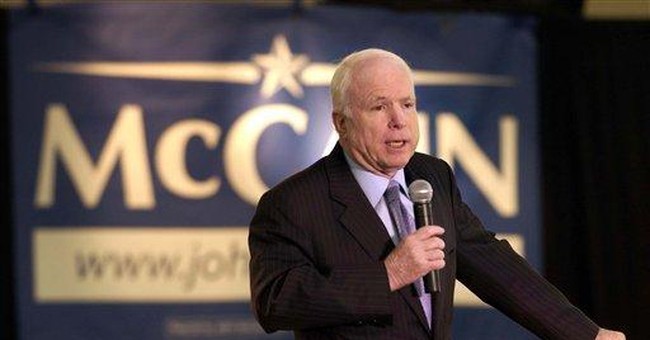 The winner of the Republican presidential nomination will probably be the candidate who most embodies the core principles and beliefs of Ronald Reagan.

While both have said President Bush's across-the-board income tax cuts should be made permanent before they expire in 2010, neither have signed the pledge that every Republican presidential nominee has signed since 1988 promising not to raise the tax rates.

And as of last week, neither of the two candidates were willing to say they soon would sign it, raising concerns among the GOP's economic conservatives that they were going a little wobbly on the party's promise to reduce taxes to the lowest possible level.

The issue was especially troubling for McCain because he was one of only two Republican senators who voted against the Bush tax cuts in 2001 and who voted against accelerating them in 2003. He abruptly flip-flopped last year, voting to extend some of the tax cuts, when he began actively running for president.

Until that time, he was a foe of his party's tax cuts, telling his colleagues in the Senate, "I cannot in good conscience support a tax cut in which so many of the benefits go to the most fortunate among us at the expense of middle-class Americans who need tax relief."

That's a statement no Democratic presidential contender today would disagree with, but it was sheer apostasy to his party's conservative base.

The pledge is a short, written statement, circulated by Americans for Tax Reform to all the candidates, that simply states they will "oppose any and all efforts to increase the marginal income tax rates."

Tax-cut crusader Grover Norquist, ATR's president, has turned the pledge, started in 1986, into an election ritual that no serious Republican candidate for president has refused to sign: Former president Bush signed it in 1988, as did Bob Dole in 1996 and George W. Bush in 2000.

But Norquist believes the holdouts will sign it this year and are waiting for the appropriate time to announce it. "In my conversations with each of the campaigns, it is my expectation that, before the summer's out, all of the Republicans running for president will have signed the pledge," he told me last week.

Still, it begs the question, why have McCain and Giuliani been reluctant to sign it at the beginning of the 2008 election cycle, as did Romney? And do they intend to sign it later this year?

I put that question to both candidates last week, but their aides refused to answer it directly.

"Sen. McCain has over a 20-year record of opposing tax increases, and the senator's record speaks for itself," said McCain spokesman Danny Diaz. When I pressed him about whether the senator intended to sign the pledge, he said, "No comment."

"Mayor Giuliani has a strong record of cutting taxes" in New York, said his spokeswoman Maria Comella. But will he sign it eventually? "His record speaks for itself," she replied.

This may only be a matter of campaign tactics and timing, but the failure to sign the pledge bothers tax-cut champions like Kemp who see this as a no-brainer.

"I can't imagine why they wouldn't sign a statement against raising the tax rates. They might not want to bind themselves down to any tax increases, on cigarettes or something like that, but this says tax rates," Kemp told me.

Still, both Giuliani and McCain, despite his late, election-year conversion as a supporter of the Bush tax cuts, are sending signals there might be a need at some point to raise the top rates -- as just about every Democratic presidential candidate has sworn to do, if elected.

Within the McCain camp, some think he wants to keep that option open in case he needs emergency revenue to fight the war on terrorism, and the former mayor, who led his city through the 9/11 catastrophe, may think so, too.

But Romney, running as a dyed-in-the-wool Reaganite, not only says he will oppose any attempt by the Democrats to raise tax rates, he plans to set forth a series of even more sweeping tax-cut proposals in the months to come. Right now, on economic policy, he is sounding more like Reagan than either McCain or Giuliani.