Read their lips: More new taxes for all 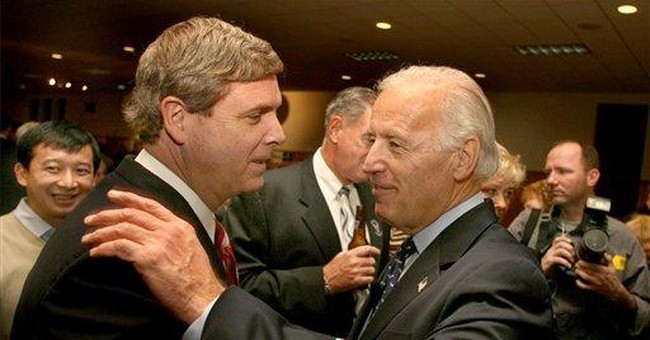 WASHINGTON -- Virtually all the Democratic presidential contenders say they will raise taxes only on the richest Americans, but the truth is, their tax increases will likely hit people further down the income scale.

Democrats supposedly learned their lesson when former vice president Walter Mondale barely carried only one state (his own) in his ill-fated 1984 presidential campaign, after he proposed tax hikes on annual incomes of more than $60,000. Now Democrats insist they would raise taxes on people earning $200,000 a year and up.

But middle-class voters have reasons to be skeptical of such promises that they or their employers would be untouched, because tax hikes on the top brackets always have unintended consequences that affect people in the lower tax brackets.

If the Democrats campaign on raising taxes just for those at the top tax rate (now 35 percent under the Bush tax cuts), "it will backfire on them for two reasons," said economic strategist Cesar Conda, who was Vice President Dick Cheney's chief domestic policy adviser.

"No. 1, a lot of small businesses, small proprietorships pay the top individual tax rate, so they will be raising taxes on small businesses and entrepreneurs," Conda said. While little businesses earning $200,000 or more a year sounds like a lot to the Democrats, the people who run them and perhaps employ others hardly consider themselves rich.

"No. 2, a lot of polls I've seen suggest the American people don't believe the Democratic tax increases will stop at just the rich, that eventually it will hit the middle class," he said.

Tax-cut crusader Grover Norquist has said how that would be done. "When they talk about taxing the oil companies, that would be a tax on anybody's 401(k) retirement plan that invests in Exxon-Mobil stock," he said. Half of all Americans are invested in the stock market, and tens of millions of these workers are middle class.

Even cautious Democrats are warning their presidential candidates to be careful about how they define the tax issue, fearing it could hurt their party's chances in 2008.

"The preconceptions about the Democrats is that they are more likely to raise taxes than the Republicans, so you have to be careful," said James Kessler, issues director for the Third Way, a centrist-leaning Democratic advocacy organization here.

"Democrats have to define themselves as proponents in the battle for the middle class so that any tax increases they espouse, like rolling back part of the Bush tax cuts for the wealthy, should be used primarily for middle-class tax cuts," he said.

But with few exceptions, the Democratic candidates have railed against the Bush tax cuts in general without making any distinctions about the bulk of its across-the-board provisions that reduced taxes for middle-income Americans and those at the very bottom, too.

Worse, their campaign rhetoric hints broadly that their tax targets aren't just the rich. "Let's get back to shared sacrifice," Sen. Hillary Clinton said when she unveiled her tax-hike plan to deal with Hurricane Katrina. "We're going to take things away from you on behalf of the common good," she told a San Francisco audience in 2004.

In his best-selling book, "The Audacity of Hope," Sen. Barack Obama fiercely attacked perceived wage stagnation and income inequality. Bush's tax cuts "made them worse," he said, and he was going to do something about that by raising taxes.

In fact, millions of very low income Americans were removed from the tax rolls by Bush's tax cuts, while millions more were put in a new and lower 10 percent tax bracket. How exactly did this make them worse? Former North Carolina senator John Edwards has proposed soaking the rich to finance universal health care, but more sober estimates suggest he would need to target people much further down the income scale to pay for his enormously expensive government plan.

New Mexico Gov. Bill Richardson may be the only exception among the Democratic candidates calling for higher taxes. In his first term, he cut his state's income tax rates across the spectrum (as Bush did), cutting the top income tax rate from 8.2 percent to 4.9 percent.

It's not something he brags about before certain audiences. He never mentioned the tax cuts in his speech earlier this month to the Democratic National Committee's winter meeting where they cheered Clinton's call for seizing oil-company profits and spending it on the environment and other programs.

In their zealous pursuit of higher taxes, Clinton, Edwards, Obama et al. suggest the rich are not paying their fair share, when in fact they are paying the lion's share.

The top 10 percent of all income earners were paying 67.7 percent of all federal income taxes paid in 2001 when Bush enacted his tax cuts. By 2004, they were paying nearly 71 percent, according to the Congressional Budget Office and the IRS.

If the Democrats' presidential pack thinks that's not high enough, then they're coming after the rest of us.