Success stories fly under the radar 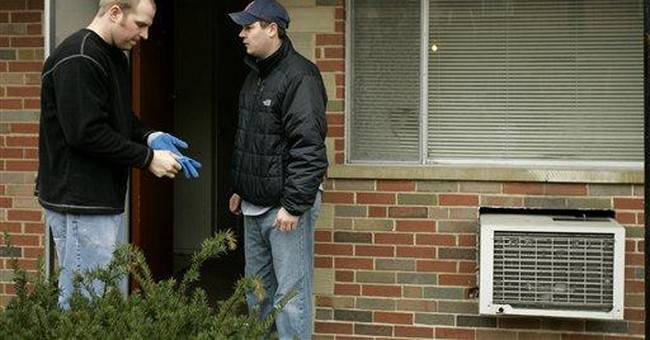 If this is the winter of America's discontent, our troubles are largely overseas where the Iraq war overshadows so many positive, even breathtaking advances here at home.

None of the really good news received much attention last week, at least on the nightly news shows that focused on the war and the vicious Arctic weather that engulfed much of the nation. So perhaps this is as good a time as any to warm our collective hands on what else was happening.

Federal Reserve Chairman Ben Bernanke gave the U.S. economy a clean bill of health without the usually gloomy caveats. Wall Street remained in the midst of a Bush rally that was pushing the Dow to new records almost daily, fattening middle-class 401(k)s and IRA pension funds in the process. The S&P 500 was trading at its highest level in six years.

Meantime, oil was falling into the $57-a-barrel range, signaling cheaper gas prices, and the federal-budget deficit was dropping sharply, without raising taxes as the Democratic presidential candidates are proposing to do if they win back the White House in 2008.

Bernanke's testimony before House and Senate committees must have been especially welcomed at the White House, as it was by the financial markets here and abroad. The economy was growing nicely, and it would continue to expand at a moderate rate this year and next, he said.

Inflation appeared to be within a tolerable range, too, a stronger signal that the Fed has no plans to raise short-term interest rates that sent a huge collective sigh of relief through the markets and the business community.

Contrary to all the worrying and hand-wringing over the budget deficit from Democrats and insecure newspaper pundits with too much time on their hands, Bernanke said he expected deficits to continue their sharp decline this year and next.

This remains one of the major, underreported success stories of the Bush administration. After all those nightmare scenarios about the nation being plunged deeper into a sea of red ink because Bush had the temerity to cut taxes, well, just the opposite is occurring.

Last year, the projected deficit was essentially cut in half as a result of an explosion in tax revenues from healthier corporate profits, more capital gains and millions of workers being put on the nation's payrolls.

The deficit in the first four months of the fiscal year has fallen sharply "as the government continues to benefit from record levels of tax collections," the Associated Press reported last week. Indeed, tax revenue coming into the Treasury from October through January was up by nearly 10 percent from the same period a year ago.

This was further proof that all those Democratic complaints in last year's election about Bush's tax cuts mortgaging our future were nothing but hot air, signifying nothing.

Bernanke was also bullish about the global economy, believing that the U.S. economy would benefit from its continued expansion by selling more of our products overseas. Bush's free-trade policies pushed U.S. exports last year to $1.4 trillion, and the Fed is looking for that number to climb to a new record this year as well.

No wonder Wall Street investors largely ignored the latest record trade-deficit data as having little or no impact on our economy. It is a figure that has grown increasingly meaningless in recent years as the U.S. economy grows stronger no matter what the trade deficit is. (We had trade surpluses during the Great Depression.)

And what about all those scare stories that the United States is losing its competitive edge in the world, in part because we lag behind so many other industrialized nations in math and science scores?

A recent announcement here, that was consigned to the back pages of our newspapers and got zero nightly news treatment, raises a lot of questions about the so-called knowledge gap we keep hearing about.

Intel announced earlier this month it has designed a new computer chip that is much more efficient and powerful than any previous chip. It is so small and so powerful that tiny cell phones will be able to perform tasks that only today's large desktop-computer models have been able to accomplish.

The microscopic transistor that makes all this possible is so tiny that more than 300 of them will be able to fit on a single red blood cell. Experts say they are going to make medical, bionic and other technology advances that have heretofore only existed in our imaginations.

But such feats of technology seem to be almost commonplace in the United States, where such scientific advances continue to outpace all of the world's industrialized countries. If we lag other countries in test scores, why aren't they making the same advances in technology and medicine?

Part of our advantage has to do with immigration, drawing the best and the brightest to our country. But I suspect these test-score studies have a lot of holes in them that never get reported here. We're still turning out a lot of very smart students who are going to push the technological revolution to a new and higher American orbit.