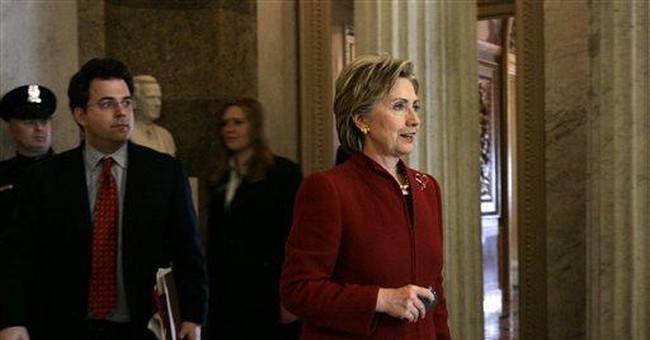 WASHINGTON -- Plans by four major states to hold their presidential primaries early next year raises the likelihood the nominees will be chosen in a matter of weeks before most of the country has had a say in their selection. For years now, the states have been moving their primary and caucus dates up earlier and earlier in the election year, squeezing more delegate-selection contests into January and February. Now California, Florida, Illinois and New Jersey are also expected to schedule their primaries as early as Feb. 5 in a calculated move to influence, if not decide, who will be their parties' 2008 nominees.

That development has sent campaign strategists for the presidential contenders back to the drawing boards, trying to figure out how this affects the race for the White House and whether they can turn it to their advantage. Certainly the accelerated nominating calendar puts more pressure on the front-runners to nail down their victories early because the race will be all but over in a high-speed blur that favors the better-funded, better-known candidates.

But it's also renewed political debate over the nature of an increasingly front-loaded system that can choose a nominee before most voters know that much about them -- forcing the contenders to campaign on television in a number of big states in a shorter period of time, without meeting many voters face-to-face.

"No candidate is going to be able to spend a lot of time in any one state on Feb. 5. They are going to have to spread themselves thin. The voters in those states are not going to have the opportunity to get to know those candidates," said Kathleen Sullivan, the veteran Democratic chairman of New Hampshire, which traditionally holds the first primary of the year.

"I don't think it is good for the process. The front-loading is going to hurt all of the candidates in both parties because whoever the two nominees end up being, it will be such a truncated nominating process that they will not have been truly tested by the voters," Sullivan told me.

"What we will end up having is the nominee of our party being decided no later than Feb. 5, because there will be at least 12 and probably more states with a primary on that one day for both parties," she said.

The bigger states have a point when they argue the early, smaller, less voter-diversified states have had an inordinate influence in choosing the nominees. Why should Iowa, which holds the first contest in a system of local caucuses (on Jan. 14), get so much prolonged attention?

Tiny New Hampshire traditionally follows (Jan. 22), but the Democratic Party decided it wanted to give the West an earlier say in the process, so Nevada will hold caucuses just before the Granite State. South Carolina is next on Jan. 29.

A few days later, the big four states are hoping to join eight others in a Super Tuesday contest that officials say will all but seal the nominations for the presidential election.

That would leave 30 or more states to essentially ratify what the front-loaders have already decided. That's not democracy and that's not fair, say the system's critics.

Who will be helped most by this compressed primary schedule? I put that question to several campaign strategists who have been tracking the early jockeying among the candidates, and here's their take:

New York Sen. Hillary Clinton's campaign funding advantage will allow her to compete in all of the big four's expensive media markets, which are all but closed to the poorly funded dark horses. She holds an early lead in the New Jersey polls, in her native state of Illinois and in California.

On the Republican side, former New York City mayor Rudolph Giuliani holds a strong lead in neighboring New Jersey, and California and Illinois are considered favorable territory for him as well.

"A primary schedule that is front-loaded with the large states is going to work to the advantage of the candidates who are better funded and are showing the strongest lead in the polls at the outset. If you take the lead in early January, you can convert it into a prohibitive delegate lead in the bigger states," said Mac Stipanovich, a Florida Republican campaign strategist.

"The guys who are further back in the pack want a longer primary campaign, with big states, if not in the back of the schedule, at least dispersed through the spring and summer," Stipanovich said.

But that's not going to happen, though the camp of one long shot -- New Mexico Gov. Bill Richardson -- believes the front-runners we see now may not be at the head of the pack in January.

"Hillary will have a formidable campaign, but that doesn't mean she will have an insurmountable campaign by any stretch of the imagination," says New Mexico Democratic chairman John Wertheim.