Bush budget not all it seems 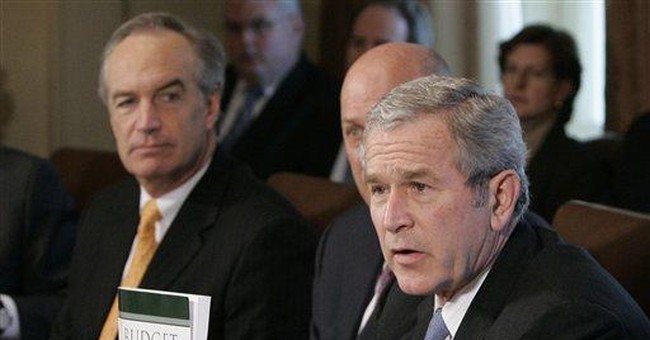 WASHINGTON -- Each February, the president proposes a budget for the next fiscal year and each year the cost of government grows larger and more wasteful than ever before.

This year's budget request is a whopping $2.9 trillion, a sum of money that is incomprehensible to most people and to most lawmakers, too. The growth in federal spending has grown exponentially in the past decades and continues to gather speed. When Jimmy Carter left office, the annual budget was a mere $600 billion. When Ronald Reagan ended his eight years in office, it was about $1 trillion. By fiscal year 2008, the yearly spending bill will have grown by nearly $2 trillion over an 18-year period.

There is much in this budget, as in any other, that the American people could do without, and, over the years, I've written about these programs in my columns and in several books, including one titled "Fat City: How Washington Wastes Your Taxes."

But the complaints coming out of the new Democratic Congress about President Bush's latest budget aren't about wasteful spending so much as they are about his so-called "rosy numbers" on future revenue growth and grouching about not enough spending for this or that domestic agency or program.

Throw in another $481 billion for defense costs to protect us from bad people, plus another $142 billion to fight the terrorists in the wars in Iraq and Afghanistan, plus $261 billion in interest payments for the national debt and relatively little is left for other things.

Conservatives have been among Bush's fiercest critics because they say he has done nothing to reduce spending, and that's a fair complaint in his early years, though this budget seeks to hold the line on discretionary non-defense spending overall.

However, at the outset of his presidency, Bush made one massive spending cut that doesn't show up as a budget reduction in the annual documents sent to Congress. And that's the tax cuts he enacted in 2001 and 2003 -- between $1.2 trillion to $1.7 trillion, depending on whose numbers you accept, over 10 years. Friends and foes alike consider these tax cuts, but they are also budget cuts, too, because if Bush had not succeeded in reducing the tax rates on income, capital gains, dividends and other sources of income, most of that money would have been spent by Congress.

The Democrats' criticism of the Bush budget falls into two areas: 1) It does not spend anywhere near enough on important national domestic needs, and 2) the tax cuts have severely reduced needed revenues to pay for them.

For those who think government spends too much, Bush's $2.9 trillion budget will be seen as a bargain if the Democrats' future spending plans are adopted. Former North Carolina senator John Edwards says if he wins the Democratic nomination and the presidency, he will propose a universal-health-care plan that will cost $120 billion, a figure that budget-crunchers say is deeply underestimated. And that's only one of many big spending plans he wants to implement.

But no charge by the Democrats is more wildly untrue than their claim the tax cuts have slashed federal revenues and thus have caused the deficit. Quite the opposite, the tax cuts have fueled economic growth that has boosted the flow of tax revenue into the Treasury.

If you have been reading the news stories about the budget deficit over the past year or two, you may have noticed they reported "unexpectedly higher revenue growth" which in turn has cut the budget deficit in half just as Bush had forecast. Indeed, burgeoning tax revenues has been one of this administration's strongest fiscal achievements.

"Tax revenues in 2006 were 18.4 percent of gross domestic product (GDP), which is actually above the 20-year, 40-year and 60-year historical averages," writes Heritage Foundation budget analyst Brian Riedl in a new study.

"The inflation-adjusted 20 percent tax-revenue increase between 2004 and 2006 represents the largest two-year revenue surge since 1965-1967," he reported. Thus, Democratic charges "that Americans are undertaxed by historical standards are patently false."

There are only two ways to reduce and eventually eliminate the budget deficit -- slow the rate of growth in spending and accelerate the growth of the economy.

Congress has failed abysmally to curb spending, but the Bush tax cuts have sharply increased tax revenue. His proposed budget forecasts that the feds will rake in $2.66 trillion next year, most of it from individual and corporate income taxes.

Democrats say that revenue number is unrealistic. But if the economy continues to grow by 3 percent or more this year and next -- as I expect it will -- tax revenues will be even higher. All that is needed now is to apply the brakes on spending.