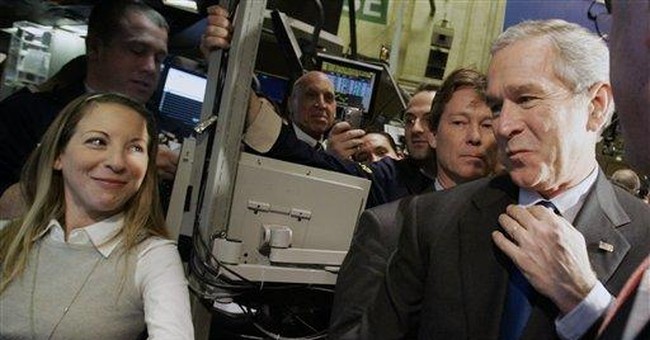 WASHINGTON -- Despite the gloom and doom we heard in last year's elections, a torrent of upbeat economic reports show the Bush economy is alive and well, and it is likely headed for a healthier performance in 2007.

Last week's report from the government's Bureau of Economic Analysis must have come as a shock to President Bush's Democratic critics when it showed the economy racing along at a brisk 3.5 percent annual growth rate in the last three months of 2006. For the year, the economy grew at a stronger than expected 3.4 percent, propelled by falling oil and gas prices, higher wage and job growth, increased consumer purchasing power and even an uptick in housing sales.

The bullish report came out at a politically perfect time for Bush, as he delivered an optimistic speech on the economy on Wall Street and toured the New York Stock Exchange, where he was greeted like a rock star as the financial markets soared to record highs -- boosting worker retirement funds in the process.

The White House expected the Federal Reserve, ending a two-day meeting Wednesday, would not raise short-term interest rates, and the Fed did not disappoint the markets. A statement reassuring the country about the economy's soundness added to Wall Street's confidence that pushed the mighty Dow to over 12,600 -- on its way to over 13,000 by year's end.

The latest economic indicators "suggested a somewhat firmer economic growth," the housing market showed signs of stabilizing and core inflation had "improved modestly" in the past several months, the Fed said.

What Gallup found was that Bush's low scores on the economy have improved significantly. A Jan. 15-18 survey of how Americans rate current economic conditions found that 52 percent now rate the economy as excellent or good, 33 percent say it's fair and 15 percent call it poor. That 52 percent approval rating is up from 42 percent in December.

Many things contributed to this four-year economic turnaround, most of all the entrepreneurial inventiveness of the American people, but Bush's across-the-board tax cuts spurred the economy and got it moving again.

The one thing stock markets do not like is uncertainty, but Bush sought to assure Wall Street that, as long as he is president, there was not going to be any Democratic tax hikes that would short-circuit the recovery. Asked during his visit to the stock exchange if he thinks the bull market still has a long way to go, he replied, "It will as long as we do the right things in Washington. And keep taxes low."

But it wasn't just Wall Street that was benefiting from the Bush rally. The benefits were seen throughout the economy.

Retail sales in December rose by 0.9 percent, the strongest increase since a torrid 1.4 percent rise in July. Consumer spending rose at an above-average 4 percent in the fourth quarter, according to a survey by Bloomberg News.

And as for all those predictions about the home-sales bubble bursting and bringing down the entire economy, existing home sales have been rising in the past two months -- signaling a needed turnaround in one of the economy's pivotal sectors.

Manufacturing continues to be another weak spot, but recent numbers show an increase in durable goods orders, led by the airline industry, and exports hit another record high last year, too.

The decline in manufacturing jobs does not mean we are producing or selling fewer manufactured goods. It doesn't get reported on the nightly TV news shows, but we are manufacturing and selling more than ever before and more than any major industrialized nation.

The happy result is that U.S. exports shot up by 13.1 percent through November 2006 over the previous year to $1.3 trillion. Exports comprised 11.2 percent of everything we produced in the third quarter, "the highest ever in dollar terms. It was 4.9 percent 50 years ago and 10.2 percent five years ago," the Commerce Department reported.

Throughout last year's election, the Democrats and most of the national news media were wrongly portraying the American economy in decline, despite the fact that the economy was growing by nearly 3.5 percent for the year. This was fueled by healthy job growth, creating 9.3 million new jobs since the end of the 2001 recession. That compares to only 360,000 in Japan and 1.1 million in Europe over this period.

Last week's reports from the Fed, government surveys and independent polls showing that a majority of Americans approve of the Bush economy was indisputable evidence that strong economies are built on lower tax rates. Bush, like the Ronald Reagan and John F. Kennedy tax cuts before him, has proved that once again in spades.