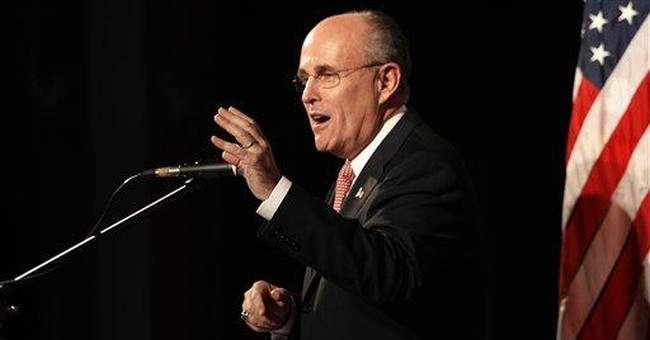 Remember when John McCain was decrying the corrupting influence of big money in our elections?

Well, since McCain and his band of reformers passed the stringent new law, here's what happened: The amount of contributions an individual can give to each candidate per election has jumped from $1,000 to $2,300; all of that so-called big money in the past has grown bigger, with presidential candidates talking about raising $100 million this year alone to prepare for the 2008 primaries; and McCain and some of his fellow reformers say they doubt they'll abide by the limits in the presidential public-financing system they enacted into law.

Such are the unintended consequences of hyperventilating reformers who promise that if we just exert the power of the state to prevent people from freely giving to whomever they wish, we can take big money out of our elections. But we now find it's very hard for these lawmakers to live by the rules they want to impose on the rest of us.

When McCain, one of the front-runners for the Republican presidential nomination, appeared on ABC's "This Week with George Stephanopoulos" on Nov. 19, he was asked this question:

"If you choose to run, will you stay inside the public-financing system or go around it?"

McCain, seemingly caught off guard by the question, replied, "I don't think -- it depends, one, on what other candidates might do."

So far, it appears that his chief rivals -- former New York mayor Rudy Giuliani and former Massachusetts Gov. Mitt Romney -- intend to raise as much money as they can for the primary cycle, dodging the limits on how much they can spend.

That appears to be the case, too, among the Democratic presidential candidates, including Hillary Clinton, Barack Obama and John Edwards.

"This may be the first election where the nominees may not take public funding in the general election as well, but that remains to be seen," said campaign-finance law attorney Jan Baran. "It's tough to turn down a check for $70 million with no fund-raising costs."

But why should they when there's so much money available just for the asking?

Take a look at what's happening in the behind-the-scenes battle going on between Clinton and Obama in the pre-primary race for big money, or what some in the fund-raising business call "serious money." The word on the street is that Obama is effectively challenging Clinton's advantage on the money trail.

The youthful senator from Illinois, whose meteoric political fame has propelled him to the top tier of his party's presidential contenders, has not only been raising serious money for his White House campaign but has made inroads into Clinton's financial power base in New York, Hollywood and among trial lawyers, campaign-finance consultants told me.

"Sen. Obama is clearly enlisting the support of a lot of people out there. He has the potential to raise $75 million to $100 million," said Chip Smith, deputy campaign manager for Al Gore's 2000 bid. "But it remains to be seen how he performs as a candidate over the next three quarters."

Clinton, the queen of fund-raising, already has a $14 million war chest left over from last year's Senate race. But she has a more valuable list of donors from her husband's successful races in 1992 and 1996 and a vast network of moneymen that, one supporter said, "can raise $100 million without breaking a sweat."

But that doesn't scare Obama who's pulling in checks from a variety of rich donors at the party's base, as well as through the Internet. Much of the motivation behind the checks flowing into his coffers has to do with his call for U.S. troop withdrawal from Iraq, a move that Hillary has opposed.

Billionaire financier George Soros, who gave millions to liberal activist groups like MoveOn.org in an attempt to beat President Bush in 2004, sent Obama a check for $2,100 after he announced his presidential exploratory committee. In Los Angeles, where the movie industry has been a major source of Clinton's campaign money, there has been a noticeable shift to Obama among major movie producers. Jeffrey Katzenberg, Steven Spielberg and David Geffen were planning a fund-raiser for him right after he makes his formal entry into the race on Feb. 10.

Notably, a number of past Clinton supporters were said to be "in neutral" for now, like New York business executives Robert Zimmerman and Orin S. Kramer. The buzz from this shift toward Obama has been growing in Democratic suites here for the past several weeks.

But Smith and Baran caution against reading too much into the money numbers at this early juncture in the two-year marathon.

"Howard Dean, an obscure governor from tiny Vermont, raised $40 million, a record in off-year fund-raising then, and was on the cover of all the news magazines. By the time of the Iowa caucuses, he came in third," Baran said.