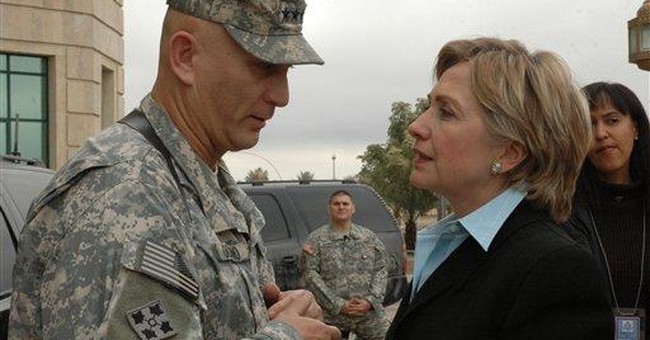 WASHINGTON -- The most-talked-about subject among Democratic strategists here is Sen. Hillary Clinton's decline in the 2008 presidential-preference polls in the face of growing support for her two chief rivals.

Pollsters tell me her weakness in Iowa and New Hampshire is not only the result of the increased popularity of former North Carolina Sen. John Edwards and freshman Illinois Sen. Barack Obama, but a deepening antipathy toward her among Democratic-leaning independents who dislike her support for the war in Iraq and who question her electability.

"I think Hillary strikes these voters the same way Sen. John Kerry did in 2004. They would really like to vote for someone they really like this time. Hillary doesn't fit that characterization right now," said pollster Del Ali of Research 2000, who conducted the Iowa and New Hampshire surveys.

His findings mirror a drop in national support for the liberal New York senator, other pollsters tell me. "There's been erosion," said independent pollster John Zogby. "She's polling in the low- to mid-40s nationally."

The numbers astonished a number of party veterans who saw Clinton as the undisputed front-runner going into the presidential-primary cycle. But she came in a distant fourth in the Iowa poll of 600 likely voters conducted Dec. 18 to Dec. 20, drawing a mere 10 percent in an increasingly crowded field of Democratic contenders.

Notably, Edwards, the Democrats' 2004 vice-presidential nominee, and Obama were tied in first place with 22 percent each, followed by outgoing Iowa Gov. Tom Vilsack with 12 percent.

In New Hampshire, whose early January 2008 primary follows the Iowa caucuses, the Research 2000 poll showed Clinton locked in a dead heat with Obama, who was greeted like a rock star in a whirlwind series of standing-room-only appearances across the state last month.

In this poll late last month, Clinton and Obama drew 22 percent and 21 percent, respectively, followed by Edwards with 16 percent. It was a sharp comedown for the former first lady. Just one month before, she led Obama by 23 points.

What caused this precipitous erosion in Clinton's support in a pivotal primary state that is a must win in presidential politics?

Ali, who interviewed 600 likely voters there, said the state's electorate was made up of "a lot of independents. These are the same people who loathe President Bush, loathe the Iraq war. But deep down, they don't like Hillary Clinton," he told the Concord Monitor.

In an interview last week, Ali told me, "Her chief rivals are very much against the Iraq war and prefer that we begin withdrawal. I don't think they trust her, to be honest with you.

"Part of the reason is that among the candidates, she seems the most supportive of the war in Iraq and appears less critical of President Bush than the other candidates," he said.

Clinton, who is reportedly planning to announce her candidacy later this month, has yet to campaign in New Hampshire, and Democrats in the state say they expect her poll numbers to improve once she begins active campaigning.

"You cannot underestimate Sen. Clinton. She is well known, has the ability to raise a lot of money and has a great spouse, Bill Clinton, who will be supporting and advising her," said Jim Demers, a longtime party operative in the state.

But Demers, who said he intends to support and work for Obama if he runs, pointed to one little-noticed development that further fed the political buzz in the party about Clinton's weaknesses.

"In previous presidential-primary cycles, many candidates had committed support from some big-name politicians," Demers told me. "Usually a year in advance, they have big names on their team. This year, 99 percent of the activists are uncommitted and waiting. That's unusual."

That the big names have not come out in favor of Clinton at this point speaks volumes about her candidacy, other Democrats told me. They are waiting for her to come into the state to measure her message against the others, especially against Obama, who electrified audiences with his skills as an orator -- a talent that Clinton, a dry, uninspiring speaker, does not have.

Iraq looms large in this environment. Clinton's support for the war and her public opposition to party demands for a speedy withdrawal have clearly hurt her with many rank-and-file Democrats. It was the issue that catapulted Howard Dean to the front of the pack early in the 2003-2004 cycle "and that concern has intensified here over the past two years," especially since Bush decided to send in more troops, Demers said.

Clinton was in Iraq over the weekend, talking to the troops and telling them that any criticism of the war did not lessen support for what they are doing there. But she is seen by the party's dominant antiwar crowd as a defender of the war effort there and that is triggering increased support for the antiwar messages behind heard from Edwards and Obama.