The courage of his convictions 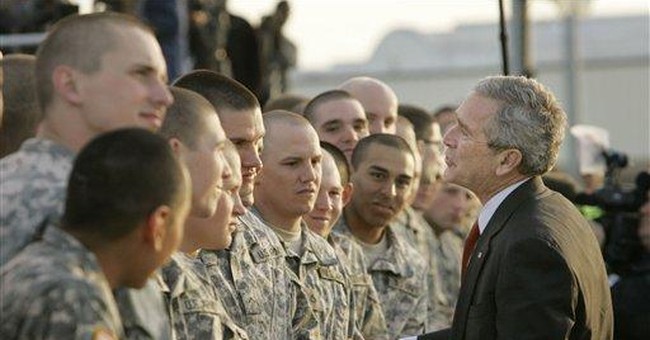 WASHINGTON -- If President Bush's decision to send 21,500 troops to Iraq tells us anything about him, it is this: He isn't someone who bases his policies on the polls or the results of the last election.

He is acting on his deepest conviction that, as he said in his address to the nation, we are engaged in "the decisive ideological struggle of our time" against Islamic extremists who have declared war against the West and the United States, in particular.

Abraham Lincoln, beset by a series of defeats and setbacks in the Civil War, told the nation "we must think anew so that we may act anew." Bush, facing a long guerrilla war that his new secretary of defense said we are losing, essentially told Americans that failure was not an option and that we must readjust our military strategy so that "We can and we will prevail."

It was a gutsy, sober decision that he knows will hardly make him more popular with the American people. Polls show that nearly two-thirds of all Americans oppose the war and think it was a mistake. His party lost the House and Senate in an election that turned into a referendum on the war. But Bush has long ago made peace with fact that he is not going to win any popularity contests for the remainder of his presidency as long as the war continues and casualties mount.

Sending more troops to secure the Iraqi capital against a stronger and far more lethal insurgency is clearly in the long-term security interests of our country, and he is willing to leave office two years from now with low-approval polls but secure in the knowledge that he fought the terrorists as hard as he could and kept America safer than it was before he came into office. Only now Bush faces two wars, one in Iraq and the other on Capitol Hill, where Democrats were gearing up to challenge him on two fronts: 1) A nonbinding resolution that declares Congress' disapproval of increased combat forces and calls for troop withdrawal by this year. 2) Withholding funding for any additional forces being sent there or other provisions that would further restrict appropriations for the war.

But House Speaker Nancy Pelosi and Senate Majority Leader Harry Reid should be careful about overplaying their hand on both scores. Thus far, as most polls show, a majority of Americans oppose an immediate or precipitous pullout of all forces in Iraq that would result in a bloodbath for the Iraqi people. Indeed, a number of Democrats would not support a speedy withdrawal if it would endanger our remaining forces there.

A congressional funding cutoff, which would have to clear a 60-vote hurdle in the Senate and then overcome a presidential veto, would be a political disaster for the Pelosi Democrats. It would threaten needed funds for our troops in the midst of war. How many Democrats would want to vote for that? Bush explained the stakes in Iraq last week without sugarcoating what the future holds, even if his plan succeeds in pacifying Baghdad and the terrorist-infested Anbar province.

"Even if our new strategy works exactly as planned, deadly acts of violence will continue -- and we must expect more Iraqi and American casualties," he said. The question, he added, "is whether our new strategy will bring us closer to success. I believe it will."

I think we will see a change for the better on the streets of Baghdad with increased troop levels. But if there is one change I would make in the new strategy, it would be a much sharper increase in the number of U.S. forces to train more Iraqi fighters. The bipartisan Iraq Study Group proposed a massive increase in the number of U.S. military trainers by 10,000 to 20,000 to quickly escalate the size and skill of the Iraqi army. Bush's plan would just expand the number of advisers embedded in existing Iraqi forces.

The key to longer-term success and to an eventual drawdown of U.S. forces is a larger, better-trained Iraqi security force that can bear the brunt of the fighting and kill more of the enemy. That side of the military equation must be ramped up beyond anything that is now being contemplated.

Meantime, Bush is fully committed to his new strategy. He has received new promises from Iraqi Prime Minister Nouri al-Maliki to commit additional brigades to the war and to get a lot tougher combating sectarian violence. He is bringing new generals into Iraq and the region, and a new ambassador into Baghdad, to carry out the plan.

He is embarked on this course because all of the other options, such as a phased withdrawal this year, were nonstarters in his mind -- signaling to the terrorists that they had won, that we would back down in the face of their threats and that would make us and the free world more vulnerable to their attacks.

It was perhaps the toughest and loneliest decision of his presidency but one that was made solely to keep our country safe.