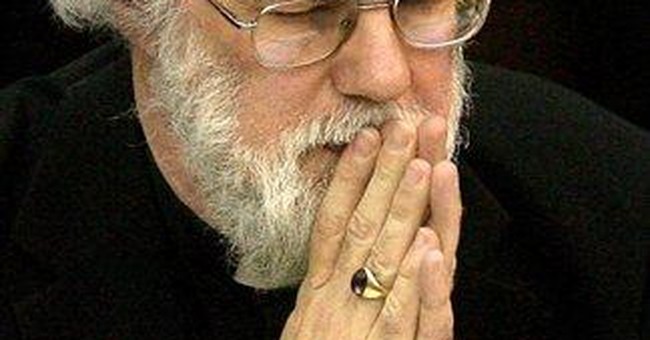 Atheists can break out the champagne: there really are some wacky religious people out there. One of them seems to be Rowan Williams, the archbishop of Canterbury,. In a recent speech, Williams ruffled a lot of feathers--it is not Anglican custom to ruffle a lot of feathers--when he said it "seems unavoidable" that Muslim holy law or sharia is coming to Britain. Not only that, but our bearded, bespectacled cleric even thought that this would be a good thing because it would foster social cohesion.

While conceding that "nobody in their right mind would want to see in this country" some of the "extreme punishments" and "attitudes toward women" that prevail in certain Muslim countries, Williams called for a "constructive accommodation with some aspects of Muslim law." So: no chopping off limbs and no honor killings. That’s a relief.

Williams argued, however, that other issues such as marital disputes and financial matters could be handled not by the British legal system but by Muslim sharia courts. Presumably Muslims would voluntarily opt out of the normal court system and invest the religious court with the authority to adjudicate their disputes on these matters. All of this would have the beneficial result, in Williams' view, of meeting the distinctive needs of Muslims. Williams argued that Muslims should not have to choose between "the stark alternatives of cultural loyalty or state loyalty."

Now if this sounds absurd to you, and a little dangerous to boot, ask yourself: where have I heard this before? What we are getting from Williams is not religious craziness but liberal craziness, not theological error but multicultural reductio ad absurdum. The multicultural premise is that classical liberal rules that apply equally to everyone nevertheless discriminate against racial and cultural minorities that don't want to play by those rules. Consequently equality of rights for individuals must give way to equality of consideration for groups. Otherwise minorities will feel disenfranchised even in a society where there is equal treatment for individuals under the law.

We’ve encountered all this in the context of the race debate. Leading multicultural activists contend that a nation dedicated to “color blindness” and “individual rights” is oppressive to African Americans. Why? Because African Americans want to emphasize their blackness, and to be recognized and perhaps even rewarded for it. Hence programs like affirmative action and Black History Month and reparations and all the rest come to be seen as ways of affirming the distinctive value of blackness. To deny African Americans these forms of recognition and subsidy is perceived as a form of mistreatment, of compelling people to become American by giving up their blackness.

Williams’ argument follows precisely this trajectory. Muslims don’t just want to live in the West, they want to live in the West as Muslims. This requires preserving Muslim practices in Western society; otherwise, Muslims must give up their religious identity for national integration. This is the context for Williams’ claim that Muslims should not have to sacrifice cultural loyalty in order to be loyal to Britain.

So what is our woolly-headed archbishop suggesting: office breaks for Muslims to pray five times a day? Jihadist history month? Overlooking the occasional polygamous marriage in the Muslim community? Easy divorce for men but very restrictive divorce laws for women? No one really knows because Williams didn't really say.

When several people expressed shock at Williams' words and called for his resignation, Williams finally acknowledged that he had spoken "clumsily" and with a "misleading choice of words." Even so, he pointed out that British law does permit certain matters to be settled by Jewish religious courts, so there is precedent for his call to extend the principle to sharia law. Moreover, Williams added that while he did not favor creating "parallel jurisdictions" for sharia and secular courts, he thought that "additional choices" could be opened to Muslims.

Jewish courts in Britain have a very limited jurisdiction mainly on matters of religious practice. They function in conjunction with, and ultimately subordinate to, the national courts. The difference with sharia law could not be more stark, because in its classical form sharia law is quite comprehensive, covering both religious and secular issues.

If Williams wants to introduce so controversial a practice as Muslim holy law in Western society, he has the obligation of saying specifically how this would work, and how it would function with the laws that currently exist. But so far Williams has not said a word about what “additional choices” Muslims deserve over and above those that their legal status in Britain entitles them too. Williams’ Sphinx-like silence can be interpreted as thoughtfulness, but more likely it is evidence of one more cleric letting his mouth outrun his brain.