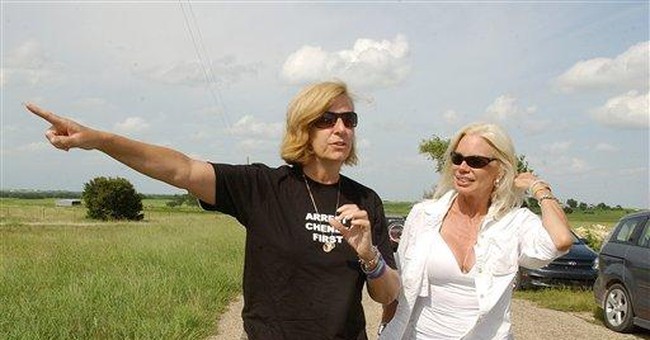 The far-left in America and Europe has an underlying craziness for which I am deeply thankful. This craziness does have a redeeming quality: it is driven by a certain brave consistency. That keeps it from being merely comic. Even so, it comes to the rescue of conservatives just when things are beginning to look gloomy.

Case in point: Ralph Nader. Just when it seemed that Al Gore might be able to defeat Bush, along came Nader to spoil Gore's picnic. Gore's strategy was to lean just enough to the center to try and win the swing voters. Nader attacked Gore's left flank by accusing him of betraying the working class. Nader stole just enough votes from Gore that the 2000 election was a tie, at which point the Supreme Court came in and settled the toss in favor of Bush.

Now we hear that activist Cindy Sheehan is threatening to challenge Nancy Pelosi for her congressional seat. Sheehan says that if Pelosi doesn't begin impeachment proceedings against Bush very soon, she's going to run. “Democrats and Americans feel betrayed by the Democratic leadership,” Sheehan fumes. “We hired them to bring an end to the war.”

Sheehan is driven by grief that seems to have turned into blind hatred. Having lost her son Casey in Iraq, she now calls Bush “the biggest terrorist in the world.” She alleges that “my son died for lies. George Bush lied to us and he knew he was lying.” In her book Not One More Mother’s Child she writes, “Our country has been taken over by murderous thugs…war criminals…a pack of cowards and murderers who lust after fortunes and power…by spreading the cancer of imperialism in the Middle East.”

Sheehan doesn't seem to realize that Pelosi’s hatred for Bush is no less fierce than hers. Pelosi just has a different, and more Machiavellian, strategy. Her strategy is to play the concerned grandmother while quietly stabbing Bush in the back. It’s essential for Pelosi to act like she’s not out to “get” the president. Nor does Pelosi want to do anything that looks like she’s unsupportive of the American troops. Sheehan doesn’t realize that Pelosi is doing what she can to destroy Bush while still trying to look patriotic and "above the fray."

While Pelosi is playing the politician’s game, Sheehan is following the logic of her convictions. If America is the source of most of the terrorism in the world, then the War on Terror should be fought against American foreign policy! If Bush is a terrorist, he should be treated like Osama Bin Laden! It should be noted here that if the premises are true, the conclusions are reasonable. In reality the premises are not true. That's what makes Cindy Sheehan and others on the far-left such crackpots. They are like the guy who thinks he's Napoleon and starts planning the conquest of Europe and Russia. If you're Napoleon these may be wonderful projects, but if you're not it's time to haul out the straightjackets.

Ordinarily I'd laugh off Cindy Sheehan's threat to take on Pelosi, but Pelosi represents the San Francisco area and there are just enough kooks in that district who might make Sheehan a serious candidate. I'd like to see Sheehan use some of her trademark bile on Pelosi. It's my favorite kind of brawl: the left vs. the far left. Run, Cindy, run!