Why Bin Laden Wants Us To Fail In Iraq 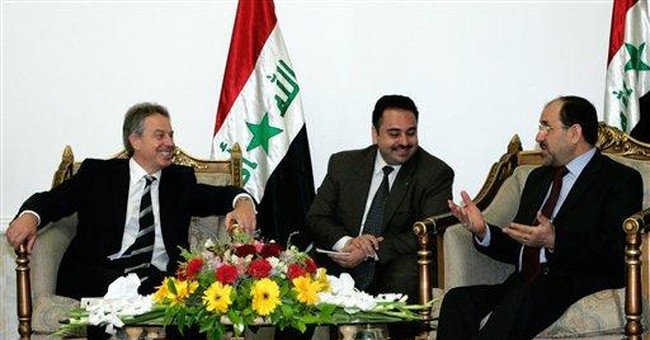 The best way for America to win the war on terror is to make alliances with traditional Muslims to stem the influence of the radical Muslims. Traditional Muslims are the majority group in the Islamic world. They make up perhaps 65-70 percent of the population. But traditional Islam is also the recruiting pool for radical Islam. What this means is that America cannot win its battle with radical Islam simply through military means. The military strategy is indispensable, as in Iraq, but it needs to be supplemented by a political and diplomatic strategy. The reason is that no matter how many Islamic radicals America kills, the purpose is defeated if twice as many traditional Muslims sign up for the radical camp. Therefore it is indispensable for America to seek to drive a wedge between traditional Muslims and radical Muslims.

How to do this? My new book The Enemy at Home offers a comprehensive strategy. Here I want to highlight one important approach. One of the biggest concerns of traditional Muslims is that they want to live in societies that defend Muslim interests and uphold Islamic values. Currently they are not in a position to do this. The reason is that most of the regimes in the Middle East today are secular tyrannies. Some examples of this are Egypt under Mubarak, Jordan under Abdullah, and the Gulf kingdoms. American conservatives tend to support these regimes because they are pro-American, and American liberals tend to support them because they are secular.

So the way for America to build bridges to traditional Muslims is to cautiously and prudentially support democracy in the Middle East. I underscore the terms “cautiously” and “prudentially” because I am not calling for a global democracy initiative of the type that President Bush has previously extolled. Yes, democracy is our ideal, but that does not mean we should support democracy everywhere, or in every single case. So when should America support democracy? When it is in America’s interest to do so. Iraq is one such case. Saudi Arabia is not.

Incredibly many Americans think that somehow Islam is incompatible with democracy, or that traditional Muslims don’t want democracy. In reality, a majority of the world’s Muslims today live under democratic governments—in Indonesia, Malaysia, India, Bangladesh, Nigeria, and Turkey, not to mention Muslims living in Western countries. There is nothing in the Koran or the Islamic tradition that forbids democracy.

But America cannot support democracy while telling the Muslims whom to vote for. In the Palestinian election, America openly lobbied for the candidates of Fatah, the party of Arafat. Not surprisingly, a majority of Muslims voted for Hamas, which presented itself as the party that would fight for Muslim interests. Similarly in Iraq, America initially wanted the secular, liberal fellow Iyad Allawi. The Iraqis decided on the more religious candidates, first Ibrahim al-Jafaari and now the current prime minister Nouri al-Maliki. Typically America interferes in Islamic elections because it wants Muslims to adopt the kind of secular, liberal democracy that most Muslims emphatically reject. Muslims are generally religious and socially conservative, and they fear secular liberalism as a threat to their core values.

So should we permit traditional Muslims to establish Islamic societies under sharia if they wish? Yes, we should. This is the essential meaning of democracy—Muslims must choose their own way. Iraq is the test case for this. If the people of Iraq want Islam to be the state religion, we should allow it to happen. If they want sharia, let them have it. There’s no reason to try to turn Baghdad into Boston. Just as democracy has enabled Japan to establish a very different kind of society than France or America, so democracy will enable Muslims to define their own civilization. This is multiculturalism in its truest and best sense, and it deserves American support. Democratization does not mean Westernization.

Support for democracy does not mean that America needs a worldwide campaign to overthrow unelected regimes. While democracy is desirable as a long-term goal, it is not always to America’s benefit to have democracy now. Foreign policy is not philanthropy, but rather a way for America to promote its interests worldwide. America is not obliged to use its resources to produce anti-American outcomes. There are hereditary monarchs in the Middle East, as in the Gulf Kingdoms, who are pro-American and enjoy fairly high levels of popular esteem. It would be imprudent under current circumstances to pressure these kingdoms to democratize or liberalize. (They are already quite liberal by Middle Eastern standards.) Nor should America seek to coerce tyrants like Musharaff, Mubarak and the Saudi royal family to become more liberal or secular. If they do, they will become further alienated from their people and become more vulnerable to being overthrown.

Iraq represents America’s initiative not to establish democracy everywhere but to establish democracy somewhere. Bin Laden and the Islamic radicals want America to fail in Iraq not because they fear democracy per se but because they fear pro-American democracy. This is something truly new in the Middle East. We should at least give it a chance. If it works the traditional Muslims can then pursue it for themselves throughout the region. Iraq is America’s best chance to promote traditional Islam as a viable alternative to radical Islam.