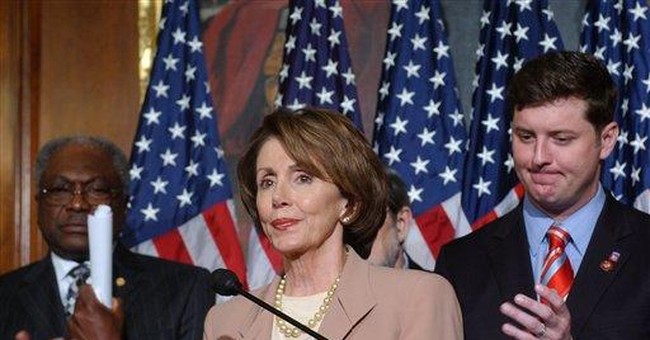 As the Pelosi Democrats attempt to steer the debate on Iraq and the war on terror away from President Bush's approach, it is useful to examine the premises behind the liberal Democratic understanding of the war on terror. So far the Democrats have been successful in faulting the president's admittedly-flawed approach. But there is no advantage in trading one bad model for another. Here, then, is my critique of some of the major elements of the liberal explanation for "why they hate us."

They're very upset at us for the Crusades: James Carroll’s recent book Crusade, portrays the Crusades as a horrific act of Western aggression that still shapes the military thinking of America's leaders and inspires outrage in the Muslim world.

Is it reasonable to think that Muslims today are genuinely outraged about events that occurred a thousand years ago? Let us remember that before the rise of Islam, the region we call the Middle East was predominantly Christian. Inspired by Islam's call to jihad, Muhammad's armies conquered Jerusalem and the entire Middle East, then pushed south into Africa, East into Asia, and north into Europe.

Rallied by the Pope and the ruling dynasties of Europe, the Christians attempted in the eleventh century to recover the heartland of Christianity and to repel the irredentist forces of Islam. The Crusades were important to Europe because they represented a fight to recover Christianity's holiest sites and also because they were part of a battle for the survival of Europe.

By contrast, the Crusades have never been important to the Muslim world. Muslims were already in control of their own holy places in Mecca and Medina. Not once did the Crusaders threaten the heartland of Islam. From the point of view of Muslim historians, those battles were seen as minor disruptions on the periphery of the Islamic empire.

In summary, the Crusades were a belated, clumsy, and defensive reaction against a much longer, more relentless, and more successful Muslim assault against Christendom. The striking aspect of the liberal critique is that it stresses the horrors of the Crusades while virtually ignoring the Islamic jihad to which the Crusades were a response. Even if liberals detest the Crusades, however, there is no good reason for many of today's Muslims to care about them, and there is no evidence that they think about the subject at all.

They're angry about colonialism: Many on the cultural left, like the late Edward Said, attribute Muslim rage to the still-fresh wounds of Western conquest and subjugation.

But America—the focal point of the anger of radical Muslims—has virtually no history of colonialism in the Middle East. If the Filipinos or American Indians were launching suicide bombers in New York, their actions could perhaps be attributed to a reaction against colonial subjugation. But until the Bush administration ordered the invasion of Afghanistan and Iraq in the aftermath of 9/11, America had never occupied a Muslim country. This was not for lack of opportunity. After World War II, America could quite easy have colonized the entire Middle East, but never even considered doing so.

They're angry because American actions have killed so many Muslims: Actually America has actively fought on the side of Muslims in several recent conflicts. During the 1970s the United States supported the Afghan mujahedin and their Arab allies in driving out the Soviet Union from Afghanistan. In 1991 the United States assembled an international coalition of countries, including many Muslim countries, in order to drive Saddam Hussein out of Kuwait and restore the sovereignty of that small Muslim country. Later in the decade, President Clinton ordered American bombings and intervention to save Muslim lives in Bosnia and Kosovo.

True, many Muslims hold America accountable for Israel’s bulldozing of Palestinian homes and Israeli shooting of stone-throwing Palestinian youths. And Muslims frequently deplore the civilian lives lost in the American invasions of Afghanistan and Iraq. These deaths, however, are small in number compared with the devastation that other invading armies, including Muslim armies, have wrought through the centuries right down to the present day.

More recent Muslim wars, such as the Iran-Iraq war, have also produced unbelievable horrors and casualty lists. Over the eight-year period of the Iran-Iraq war, for instance, between 500,000 and 1 million Muslims were killed. Islamic radicals know all this, which is why one cannot find in their literature the kind of indignation over America's killing of Muslim civilians that one routinely finds in liberal magazines, radio shows and websites.

My conclusion is that the main reasons leading liberals give to explain the antagonism of the Islamic radicals toward the United States and the West are false. Consequently we should be skeptical of liberal solutions such blocking additional troops, or squeezing funding, or calling for a precipitous withdrawal from Iraq. These "solutions" reflect muddled thinking about radical Islam, and they are likely to produce results far worse than the situation as it is now.