Letting the left off the hook 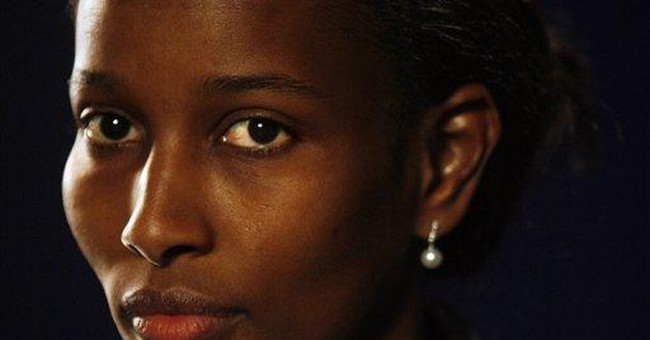 Why are some conservatives so determined to let liberals off the hook for 9/11? For the past five years, leading pundits on the left have blamed American foreign policy for the blowback of Muslim rage that produced 9/11. In my book The Enemy at Home I turn the tables and say that it is liberal foreign policy and liberal values projected abroad that are largely responsible for this blowback.

In a recent column, Victor Davis Hanson charges that my argument puts me in the category of leftist author Susan Sontag and fundamentalist preacher Jerry Falwell. Sontag blamed 9/11 on “specific American alliances and actions.” Falwell said 9/11 was God’s punishment for America’s sins. Both seemed to imply that America deserved it.

But this is not what I say at all. My book asks a completely secular question: why did the guys who did 9/11 do it? Five years after this event, it’s not an unreasonable question. To ask it is not to “justify” the attacks any more than to ask whether British appeasement of Hitler prior to his invasion of Poland “justified” that invasion. Explanation is not the same as justification.

Of course Bin Laden and his co-conspirators bombed the World Trade Center and the Pentagon. But what put them in a position to do it? What gave them the courage to attack the world’s sole superpower? How has radical Islam been so successful in recruiting Muslims to its cause? Hanson offers no explanation, merely proclaiming Al Qaeda’s ideology “rambling” and “incoherent.” But consider three key questions.

First, without the Khomeini regime coming to power in Iran in 1979, would 9/11 have occurred? Radical Islam has been around since the 1920s, but for decades it was on the margins of power. Then in 1979 it captured a major state. Khomeini is the first Muslim leader to call America the Great Satan and to call for a worldwide revolution of Muslims committing martyrdom and jihad against the U.S. The Khomeini revolution paved the road to 9/11.

So how did we get Khomeini? When Jimmy Carter was elected in 1979 his liberal advisors told him that he could not consistently uphold human rights and support the Shah of Iran. Carter pulled the Persian rug out from under the Shah, and in trying to get rid of the bad guy, he got the worse guy. So here is a concrete way in which liberal foreign policy handed radical Islam control of its first major state.

Here’s a second question: Without the weakness and inaction of the Clinton administration during the mid-to-late 1990s, would 9/11 have happened? Recall that after the cold war the Islamic radicals went back to their home countries. They were fighting to overthrow their local governments, what they called the “near enemy.” Then they made a fateful decision to shift course and attack the “far enemy,” the United States.

Why? If you can’t defeat Mubarak in Egypt or the royal family in Saudi Arabia, what makes you think you can take on the world’s sole superpower? Bin Laden says he got the idea that America was weak and cowardly and could be attacked with impunity. So the radical Muslims launched a whole series of test strikes—from Khobar Towers to the bombing of U.S. embassies in East Africa to the suicide attack on the U.S.S. Cole—to test their theory of American weakness. And when in each case the Clinton administration failed to respond, or responded with pathetic ineffectiveness, this confirmed Bin Laden in his suspicion of American pusillanimity. By his own account Bin Laden says the radical Muslims were emboldened to conceive a grander strike, the one that we suffered on 9/11.

Third, without the charge that “Islam is under attack” and that America is an atheist, immoral society, would radical Islam win so many recruits to its cause? These charges suffuse the rhetoric of Bin Laden and the leading thinkers of radical Islam. Sayyid Qutb, who has been called “the brains behind Bin Laden,” argues that America is the global leader of the unbelievers, seeking to install secular leaders in the Muslim world and impose its godless, corrupting values on Muslim society. While Hanson seems completely unaware of this extensive literature, it has an enormous resonance throughout the Middle East.

Moreover, if you think about it, what would cause an ordinary Muslim in Islamabad or Riyadh to go to his death in order to strike out against America? Because the Palestinians don’t have a state? I don’t think so. Because of Al Qaeda’s “incoherent rambling”? Not likely. On the other hand, tell a pious Muslim that the Great Satan seeking to destroy his faith and undermine the Muslim family and corrupt the innocence of his children, and now you have a plausible motive for why Muslims would feel a call to jihad.

Why then would an intelligent guy like Hanson react so petulantly to a book that shows how liberal policy and liberal values have strengthened the appeal of the Islamic radicals and emboldened them to strike out at us? Why would a conservative work so hard to cover up the left’s responsibility for 9/11?

The reason is that for the past five years Hanson and some other conservatives have been invested in a strategy to attack Islam an intolerant and illiberal, and in this way to recruit liberals over to the conservative side. It’s the old clash of civilizations thesis. The only problem is that this strategy has failed miserably. How many liberals have responded positively to conservative articles showing that Muslims are all a bunch of socially repressive, women-hating, gay-stoning fanatics? How many from the left have jumped aboard the Bush bandwagon? I count not a single convert to our cause.

Meanwhile, America is paying a high price for conservative attempts to depict the Muslim world—a world that includes 1 billion people most of whom live in democratic countries like Indonesia, Malaysia, Bangladesh and Turkey—as religiously bigoted and politically fanatical. These attacks on Islam and Muhammad and Muslim culture are having the predictable effect of alienating traditional Muslims and pushing them toward the radical camp. No wonder the moderate Muslims are reluctant to take the side of people who are always blasting their prophet and their religion.

Yet as their strategy continues to fail, Hanson and others become more desperate and are now trying to enforce conservative political correctness against independent voices like me who are calling for a new understanding and a new approach. Why else would a guy who knows me and is a colleague of mine at the Hoover Institution make the absurd accusation that I am justifying the 9/11 attacks and blaming “millions of Americans” for those attacks?

It’s time for conservatives to reject such attempts to cling to a collapsing orthodoxy. My book shows that there are two clashes of civilizations, one within the West and the other within the Muslim world. While the left in America is working in tandem with the radical Muslims to defeat Bush in Iraq, the right should ally with the traditional Muslims to thwart this “war against the war on terror.” The traditional Muslims are the one group that can help us defeat radical Islam, and we would see this if we stopped looking for allies in all the wrong places.