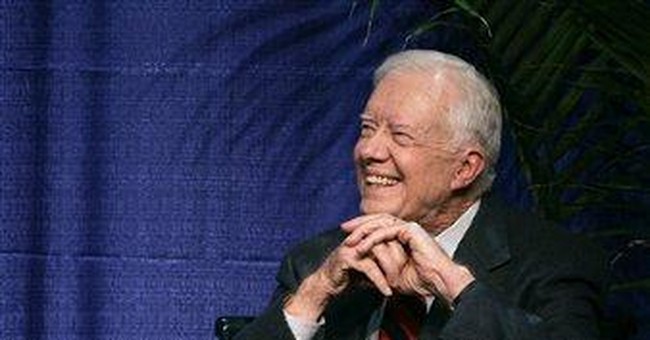 Recently Jimmy Carter was on television, denouncing President Bush’s policies in Iraq. I find this highly ironic, because Jimmy Carter and his liberal advisers helped the Ayatollah Khomeini to come to power in Iran a quarter of a century ago. Thus they gave radical Islam control of its first major state. How this happened is worth recalling, because from Carter’s failure there’s a valuable lesson to be learned in Iraq.

Islamic radicals have been around since the 1920s, but for decades they were outsiders even in the Muslim countries. One of their leading theoreticians, Sayyid Qutb, argued that radical Muslims could not just promulgate theories and have meetings; they must seek to realize the Islamic state “in a concrete form.” What was needed, he wrote, was “to initiate the movement of Islamic revival in some Muslim country.” Once the radicals controlled a state, he suggested, they could then use it as a beachhead for launching the takeover of other Muslim countries.

In 1979, Qutb’s goal was achieved when the Ayatollah Khomeini seized power in Iran. The importance of the Khomeini revolution is that it demonstrated the viability of the Islamic theocracy in the modern age. And to this day post-Khomeini Iran provides a viable model of what the Islamic radicals hope to achieve throughout the Muslim world.

Khomeini also popularized the idea of America as a “great Satan.” Before Khomeini, no Muslim head of state had said this about America. Khomeini was also the first Muslim leader in the modern era to advocate violence as a religious duty and to give special place to martyrdom. Since Khomeini, Islamic radicalism has continued to attract aspiring martyrs ready to confront the Great Satan. In this sense, the seeds of 9/11 were sown a quarter of a century ago when Khomeini came to power.

Khomeini’s ascent to power was aided by the policies of Jimmy Carter and his allies on the political left. Carter was elected president in 1976 by stressing his support for human rights. From the time he took office, the left contrasted Carter’s rights doctrine with the Shah’s practices. The left denounced the Shah as a vicious and corrupt dictator, highlighting and in some cases magnifying his misdeeds. Left-leaning officials such as Secretary of State Cyrus Vance, UN envoy Andrew Young, and State Department human rights officer Patricia Derian pressed Carter to sever America’s longstanding alliance with the Shah. Eventually Carter came to agree with his liberal advisers that he could not in good conscience support the Shah.

When the Shah moved to arrest mullahs who called for his overthrow, leftists in America and Europe denounced these actions. Former diplomat George Ball called on the U.S. government to curtail the Shah’s exercise of power. Acceding to this pressure, Carter called for the release of political prisoners and warned the Shah not to use force against the demonstrators in the streets.

When the Shah petitioned the Carter administration to purchase tear gas and riot control gear, the human rights office in the State Department held up the request. Some, like State Department official Henry Precht, urged the U.S. to prepare the way for the shah to make a “graceful exit” from power. William Miller, chief of staff on the Democrat-controlled Senate Intelligence Committee, said America had nothing to fear from Khomeini since he would be a progressive force for human rights. U.S. Ambassador William Sullivan even compared Khomeini to Mahatma Gandhi, and Andrew Young termed the ayatollah a “twentieth century saint.”

As the resistance gained momentum and the Shah’s position weakened, he looked to the United States government to help him. Carter aide Gary Sick reports that the Shah discovered many enemies, and few friends, in the Carter administration. Increasingly paranoid, the Shah pleaded with the United States to help him stay in power. Carter refused. Deprived of his last hope, with the Persian rug pulled out from under him, the Shah decided to abdicate. The Carter administration encouraged him to do so, and the cultural left celebrated his departure. The result, of course, was Khomeini.

The Carter administration’s role in assisting with the downfall of the Shah is one of America’s great foreign policy disasters of the twentieth century. In trying to get rid of the bad guy, Carter got the worse guy. His failure, as former Democratic senator Daniel Patrick Moynihan once said, was the result of being “unable to distinguish between America’s friends and enemies.” Carter does not deserve sole discredit for these actions. This intellectual framework that shaped Carter’s misguided strategy was supplied by the political left.

By aiding the Shah’s ouster and with Khomeini’s consolidation of power, the left collaborated in giving radical Islam its greatest victory in the modern era. Incredibly this same cast of characters who lost Iran wants to block Bush’s policies in Iraq. In doing so they are playing with fire. The radical Muslims who already control Iran are trying to bring a second major state, Iraq, into their orbit. Then, they have said, they will target Egypt and Saudi Arabia.

Yes, Iraq maybe a mess but in trying to get out of a bad situation, we don’t want to create a worse situation. Insurgency and sectarian strife is dangerous, but Iraq in the hands of Iranian fanatics or Al Qaeda fanatics is far more dangerous. America doesn’t need more foolish advice from Jimmy Carter. What it needs from him is an apology.