What they know that isn't so 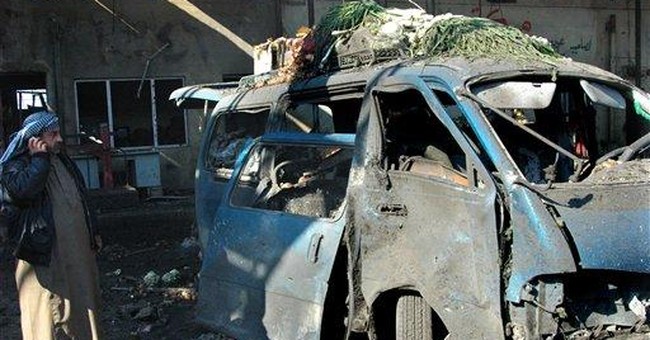 As I debate the topics covered in my new book The Enemy at Home: The Cultural Left and Its Responsibility for 9/11 I find myself arguing with a whole bunch of people on the left who “know” things that aren’t true. I’m both amused and surprised not only at the ignorance out there, but the confidence with which it is bandied about. “D’Souza, has it occurred to you…?” But actually it hasn’t occurred to me, because what you are saying is false. So here are a few myths that I’d like to correct.

They’re furious at us for stopping democracy in Iran. As the left-wing story goes, Mohammed Mossadegh was the elected prime minister of Iran in the early 1950s. The United States didn’t like the fact that he was anti-imperialist, so the CIA engineered a coup and installed the hated Shah of Iran. The people of Iran have still not forgiven us for this, and it is a continuing source of radical Muslim hatred against us.

Actually, Mossadegh was never elected by the Iranian people. He was appointed by the Majlis, the Iranian parliament, and the Shah of Iran, who was already in power, ratified the choice. Mossadegh soon got into a power struggle with the Shah, sought to overthrow the Shah, dissolved parliament, and suspended civil liberties. At this point the CIA orchestrated a coup that got rid of Mossadegh and kept the Shah in power. The radical Muslims were delighted with Mossadegh’s ouster, because they viewed him for what he was, a secular socialist. The Ayatollah Khomeini preached a sermon thanking Allah that Mossadegh was gone.

We provided weapons to both Saddam and Bin Laden. This leftist account says that America should not be too surprised at the weapons possessed by Saddam and Bin Laden, since we provided them to him. We may even have sold those weapons of mass destruction to Saddam. And certainly we provided ammunition and other material support to Bin Laden when he was fighting against the Soviet Union in the 1980s. In fact, the United States diplomatically tilted toward Saddam during the eight years of the Iran-Iran war in the mid-1980s. That was because Saddam was fighting against the regime of the Ayatollah Khomeini, and in that rogue’s contest, the United States government believed Saddam to be the lesser evil. Even so, at no point did the U.S. sell or provide any weapons to Saddam.

Nor did America support Bin Laden in any way. This issue has been exhaustively investigated since 9/11, and the results are carefully documented in Steve Coll’s book Ghost Wars. The bottom line is that the United States, to maintain “deniability” with the Soviets, funneled its support through Pakistan. And most of it went to the impoverished Afghans, not the foreign fighters who came from other Muslim countries. Bin Laden had no contact with America. He does not seem to have needed any support, not only because of his own considerable resources, but also because the Saudi government was lavishly funding the Saudis who were fighting in Afghanistan.

In Iraq we’re getting into a religious war that’s lasted for centuries. This theory, espoused among others by John Murtha, holds that the Sunni and Shia are fighting in Iraq because these two groups have been fighting everywhere since the seventh century. So who wants to get into the middle of an ancient conflict that shows no signs of abating? This would seem to be an argument for America to get out of a religious quarrel that it has no way to settle, and that shows no sign of abating.

But the Shia-Sunni conflict in Iraq is not a religious conflict. How do I know that? Because there are no substantial religious differences between the Shia and the Sunni. And these two groups have not been fighting for centuries. In fact, they haven’t been fighting at all. There are no wars that have been fought between the Shia and the Sunni in the past. Historian Bernard Lewis points out that our notion of Shia-Sunni conflict seems to be an ethnocentric projection of the Catholic-Protestant model onto the Muslim world. As late as the 1980s, Shia and Sunni fought shoulder-to-shoulder to expel the Soviets from Afghanistan.

Then what are the two groups fighting about in Iraq? Not over religion but over power. Saddam ran a big mafia-style operation for 25 years, and he recruited his thugs from his home town of Tikrit, which is to say he recruited from his own tribe, the Sunni. The Shia, although the majority, were under the jackboot of Saddam’s mafia. Now that democracy has installed the majority Shia into power, the Sunni insurgents are waging a desperate war to get back the power they have lost. It’s a ruthless war, to be sure, but it’s not a religious war and there’s no reason to think it will go on and on. One gang will win.

So where do all these myths come from? The benign explanation is the Internet. People get information off websites which get it off other websites, so that idiocy gets passed around frequently enough to become accepted as truth.

But there is a second possibility. The myths are part of the propaganda produced by the cultural left which is rooting for Bush to lose the war in Iraq and the war on terror. If Iraq is lost, the chances are it will be lost not in Baghdad but in the American mind. Bin Laden and the insurgents are completely outmatched in force, but they can still win, courtesy of the lobbying efforts of the enemy at home.