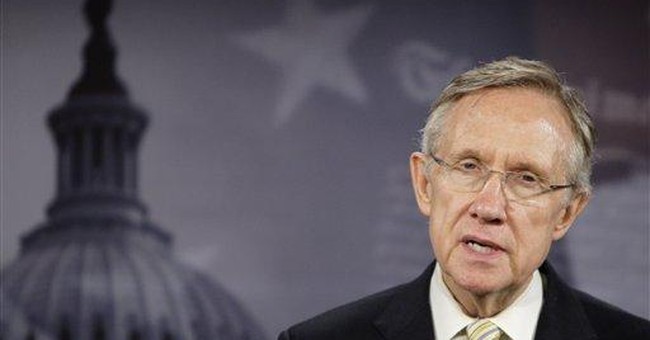 Harry Reid had two problems. How would he get the health care bill out of the Senate Finance Committee without revealing the glaring potential fissures in his party over the public option on health care? And, how could he lend a veneer of bipartisanship to a one-party bill?

He couldn't allow a vote on final passage out of the committee with a public option in the bill because he knew that he would lose Democrats and would have no GOP support. But real compromise was always out of the question. He wanted his public option. So he evolved a strategy where the only bill that would be voted on in committee would be one that did not have a public option, all the while planning for the final product to have one.

So he used the bait of a bill with no public option to hook moderate Democrats like Blanche Lincoln, D-Ark., and the gullible Republican Olympia Snowe, R-Maine.

When the bill emerged from Finance, by a lopsided 15-to-nine vote, it restored the momentum to health care reform that had stalled due to the public outrage so evident during the August recess.

Then, the dexterous Reid capitalized on that momentum to put the public option back into the bill, reversing the commitment to compromise that allowed the bill to clear the committee in the first place.

This tactic of bait and switch offers a foretaste of what Reid will attempt on the Senate floor. He obviously hopes to replicate these tactics in getting the bill through the Senate.

As he did in the Finance Committee, Reid has opened his gambit on the Senate floor by embracing a public option. He does this for two reasons: First, he wants to send a signal to the House and Senate militants that his heart is in the right place and that the final bill will probably have a public option. Second, he needs to have room to compromise so the final Senate version attracts the moderates he needs. He first veers left in order to then swing right.

His next move is predictable. As he awaits House action, he stands firm in backing the public option. And, as he nears the point of a Senate floor vote, he will pretend to modify that option in order to attract moderates and perhaps a few stray Republicans. As he and Sen. Max Baucus, D-Mont., did in committee, he will truncate or even abandon the public option to win unanimous Democratic support (and perhaps one or two Republicans).

Then, in conference with the House, he will pull the old bait-and-switch tactic again, jettisoning the Senate bill and embracing a full-throated public option in the final version that will return to the Senate.

At that point, he hopes to use the momentum of House passage and the imprimatur of the conference committee to try to persuade senators, and the public, that it is this bill or no bill and that only a proposal with a robust public option can pass.

The point of this strategy is never to ask moderates to vote for a public option until the final vote after the conference committee. Let them build a record of having opposed the public option to sell back home. Let Reid show that he tried to compromise. And only put the final test to the moderate senators at the very last minute when all the momentum is on the side of final passage.

If he succeeds, Reid gets a bill with his public option. But, even if he fails and has to delete the public option at the last minute to get Senate support, he will still have gotten the health care bill through.

By making such a fuss over the public option, with the connivance of the liberals, he keeps the spotlight away from the Medicare cuts, the end of Medicare Advantage, the inevitable rationing of health care, the taxes on the uninsured and the sick, and the cuts in medical reimbursement. A bill with all these provisions -- even without a public option -- is pernicious enough!

And, these tactics can still produce a bill with a public option.

Will this tactic work? It all depends on the political environment outside Washington. If the bill is only marginally unpopular (the current 40 percent to 55 percent), it will probably pass. But if public opinion moves another 5 or so points (to, say, 35 percent to 60 percent against), then the moderates will probably refuse to cave in.