A Crisis That Obama Won't Waste 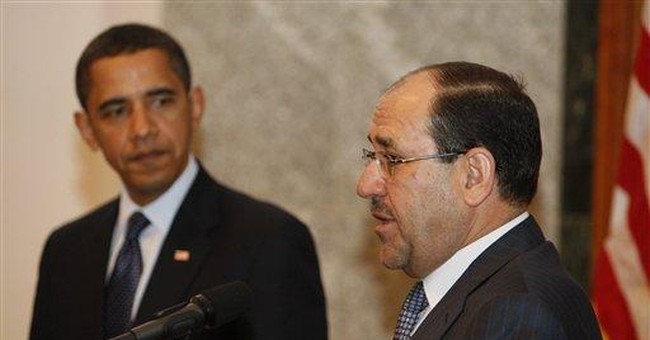 This economic crisis is too useful for Obama to want it to end. When Rahm Emanuel -- and later Hillary Clinton -- spoke of never letting a good crisis "go to waste," many people were shocked. But now Obama seems to embody the corollary: that the crisis should continue until he has thoroughly milked it to reshape American politics, society and the economy.

As with Faust, it seems that this "given moment ... he wishes to endure forever." Unlike Faust, however, he will not lose his "life and soul" to such a wish. He'll sacrifice ours, instead.

First came the "stimulus package." With only about $185 billion of its $800 billion in spending to be disbursed in 2009, Obama clearly never intended the money to be about stimulus but wanted the need for a stimulus to trigger the spending he wanted anyway.

Then came the TARP funding, often forced down banks' throats. Now comes word that even as banks want to return the money, the Treasury is making them keep it. One source at a TARP bank reports that Geithner is insisting that banks go through their "stress test" before refunding the TARP money. As Stuart Varney speculates in The Wall Street Journal, Obama wants the banks to keep the money so he can enforce his regulations on them.

Now comes Geithner's plea for extra regulatory powers and Obama's concession to global economic regulation at the G-20 summit. Both moves are game changers for any major American business. Geithner wants the power to take over any business -- presumably in any field -- whose failure would imperil the national economy. Today it's banks, brokerage houses, car companies and insurance firms. Tomorrow? Who knows?

And Obama agreed to agree on international "high standards" for the regulation of all "systemically important" companies to be promulgated by the new global Financial Stability Board (FSB). The United States, occupying one of 20 chairs on the FSB board (21 if we count the European Union), will come to a consensus with other central bankers from the G-20 nations on what these regulations should say. Then the Securities and Exchange Commission, the Federal Reserve and the other regulatory arms of the U.S. government will impose them on our economy.

(Some have objected that Congress needs to be consulted -- but as long as the agreements are "voluntary" and the U.S. agencies are merely "asked" to impose the regulations, no further grant of congressional authority is needed. But, of course, there will be nothing voluntary about the administration's demand that the agencies implement the coming FSB directives, no matter how intrusive they may be.)

And, finally, there is Obama's delegation of a total overhaul of the tax code to a commission headed by Paul Volker with a mandate to report back in December of this year.

So with the tax code totally changing, Europe about to formulate regulations for our economy, the U.S. government empowered to take over any large company, the deficit and spending reaching unbelievable levels and the feds insisting on continued control of banks, what businessman in his right mind is going to invest in anything? How could even the most foolish optimist pull the trigger on a business investment without knowing the tax consequences, the regulatory framework and the policy of the banks on lending?

But Obama knows all this. He knows that his steps will delay economic recovery. But he wants these changes not as means to an end, but as the end itself. And he is determined to get them passed and set in stone while the rubric of "crisis" justifies his doing so.

He is not unlike a leader who takes his country into war, knowing that by "wagging the dog" he can reinforce his power.

But ultimately, does Obama care if he is re-elected? Doesn't he know that he needs a good economy to extend his mandate to eight years? Yes, of course he does. But he probably figures that he can turn the economy around as Election Day 2012 draws nearer and reap all the credit then. In the meantime, no good crisis should ever go to waste.