August is the Time To Take Obama Down 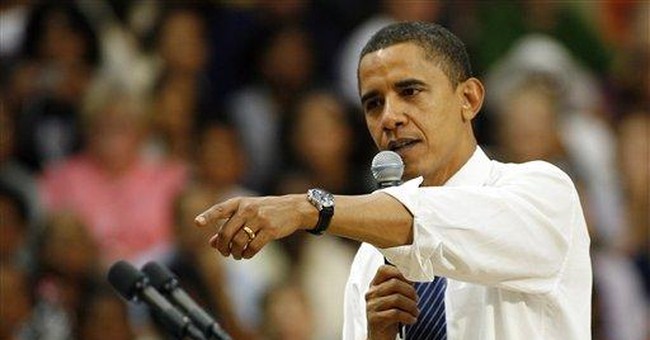 When is the McCain campaign going to get serious? It seems to be marking time with softball ads, more appropriate to the soundbites campaign media spokespeople exchange with one another than to strategic paid media hits. One ad talks about how the media loves Obama. Another mocks him as a celebrity. Each throws pitty-pat punches, far short of the kind of knockout blows one would expect from a presidential campaign. Were I a donor to McCain's campaign, paying for these pathetic spots, I would demand a refund. Or sue for malpractice.

Yet despite this softball nonsense, Obama remains vulnerable, no better than two points ahead despite the bounce from his overseas trip.

Are the McCain people waiting for September to get serious? If so, they are making a big mistake and missing an important opportunity. History indicates that the best time to beat a new candidate is in the summer. August to be precise.

Dukakis, Mondale, and Kerry all were destroyed in the summer, long before the fall campaign began. In 1984, the offensive against Geraldine Ferraro crippled Mondale well before Labor Day. In 1988, the pledge of allegiance, revolving door, and Willie Horton ads all ran in the summer. Dukakis was dead by September. And the swift boat attack on Kerry defeated him well before the summer was over.

McCain needs to make voters afraid of Obama. Not, as he suggests self-servingly, by emphasizing that he "doesn't look like all the other presidents on dollar bills," but by hitting him on the two fronts where it would really hurt -- the economy and national security. Obama's inexperience and the wildly liberal proposals he has made in his primary campaigning, both set him up for a crippling blow this month.

Oil drilling is an issue, but it does not provoke the fear that the McCain campaign needs to elicit to win. It's just an issue disagreement with bad consequences for the nation. Obama's position on the issue is not a recipe for national disaster.

But his tax plans and their likely economic consequence are very much a plan for catastrophe. Doubling the tax in invested capital, and ratcheting up the top tax bracket to an effective 60%, will plunge the nation into a real depression. Not a recession or a downturn or a correction or a slowdown. A depression. McCain needs to hammer this point home again and again and again in his advertising. He has to put top level economists on television talking about what the Obama tax program will mean to America. Obama is suspect as an ideological liberal, anyway. And nobody thinks he has the experience to be a good president. So the potential to scare voters by accurately elaborating what his tax plans will mean to the entire country -- not just the rich on whom the burden will directly fall -- is enormous.

When Obama says he will only tax the rich, it's like saying he won't shut down the entire ship, just the engine room. If McCain just talks about Obama's tax program in the abstract, most voters will shrug and note that the tax hikes won't really apply to them. Only 2% of Americans earn more than $200,000 a year and only 6% make more than $100,000. But if McCain explains the economic impact of Obama's tax proposals on all Americans, he will score points and could score a knockout.

The national security offensive should have two parts. First, McCain's ads should portray Obama as naive. By taking off on his comment that Iran is a "tiny country" that couldn't hurt the US much, he can show how the Democrat is not prepared to cope with the serious national security problems which will face the next president. The more the crisis with Iran ratchets up, the more dividends this approach will reap for McCain. But, as with the argument of an impending depression if Obama wins, McCain needs to begin the argument now and let it pile up by the fall.

Secondly, McCain should take Obama's proposed changes in the Patriot Act and show how they would weaken us in the face of domestic terror threats. Don't let the liberal media fool you. Bush's domestic security initiatives are very popular. How will Obama explain his legislation to notify suspected terrorist groups seven days after Homeland Security begins an investigation of them? Or how will he explain his opposition to the wiretapping that saved the Brooklyn Bridge from destruction. McCain needs to paint Obama as weak on homeland security.

This race is there for the winning, but McCain is using his paid media ads as mere press releases, touching on the events of the day without really using them as a strategic tool to destroy Obama. He needs to start doing so now.