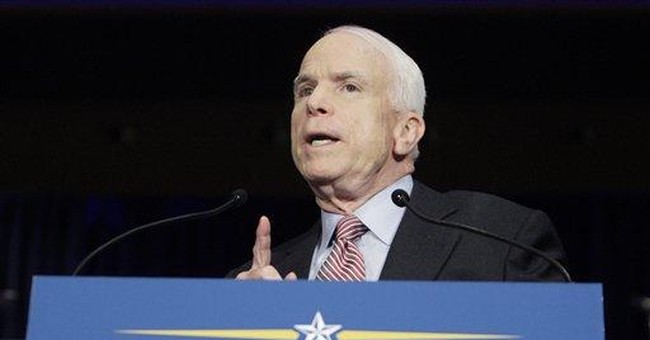 John McCain has drawn first blood in the political debate following Barack Obama's victory in the primaries. His call yesterday for offshore oil drilling — and Bush's decision to press the issue in Congress - puts the Democrats in the position of advocating the wear-your-sweater policies that made Jimmy Carter unpopular.

With gas prices nearing $5, all of the previous shibboleths need to be discarded. Where once voters in swing states like Florida opposed offshore drilling, the high gas prices are prompting them to reconsider. McCain's argument that even hurricane Katrina did not cause any oil spills from the offshore rigs in the Gulf of Mexico certainly will go far to allay the fears of the average voter.

For decades, Americans have dragged their feet when it comes to switching their cars, leaving their SUVs at home, and backing alternative energy development and new oil drilling. But the recent shock of a massive surge in oil and gasoline prices has awakened the nation from its complaisance. The soaring prices are the equivalent of Pearl Harbor in jolting us out of our trance when it comes to energy.

Suddenly, everything is on the table. Offshore drilling, Alaska drilling, nuclear power, wind, solar, flex-fuel cars, plug-in cars are all increasingly attractive options and John McCain seems alive to the need to go there while Obama is strangely passive. During the Democratic primary, he opposed a gas tax holiday and continues to be against offshore and Alaska drilling and squishy on nuclear power. That leaves turning down your thermostat and walking to work as the Democratic policies.

The Saudis have made a fatal mistake in not forcing down the price of oil. We could have gone for decades as their hostage, letting their control over our oil supplies choke us while enriching them. But they got greedy and let the price skyrocket. The sudden shock which has sent America reeling is just the stimulus we need for a massive movement away from imported oil and toward new types of cars.

The political will for major change in our energy policy is now here and those, like Obama, who don't get it need to rethink their positions. To quote FDR, “this great nation calls for action and action now” on the energy issue. What has been a back-burner problem now has moved onto center stage and McCain has put himself in the forefront.

The Democratic ambivalence stems from liberal concerns about climate change. The Party basically doesn't believe in carbon based energy and, therefore, opposes oil exploration. That's why Obama pushes the windfall profits tax on oil companies - a step that tells them “you drill, you find oil, and we'll take away your profits.” But Americans have their priorities in order: more oil, more drilling AND alternative energy sources, flex-fuel cars, plug in vehicles and nuclear power.

With his willingness to respond to the gas price crisis with bold measures, McCain shows himself to be a pragmatist while Obama comes off as an ideologue to puts climate change ahead of making it possible for the average American to get to work.

Of course, the high price of gas makes it inevitable that the US will lead the world in fighting climate change. With $5 gas, Americans will switch en masse to cars that burn less gasoline. Already we have cut our oil consumption by 500,000 barrels a day in the past year (about a 3% cut). The move away from oil will be exponential from here on out, dooming radical Islam and reversing climate change at the same time. But while we are getting new cars, we need more oil and McCain has flanked Obama on this issue. Big time.