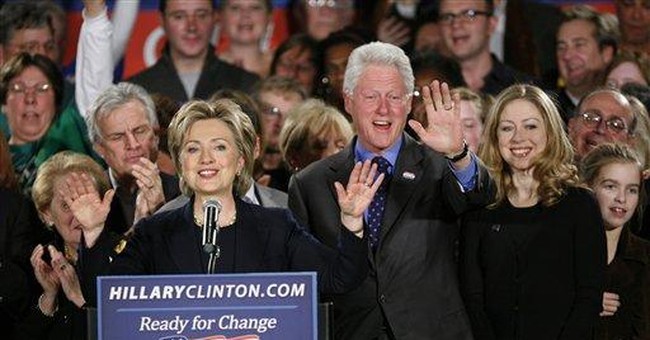 The amazing victories by Obama and Huckabee in Iowa are truly historic. They demonstrate the impact and viability of a message of change in both parties. In the Democratic Party, Obama, winning in a totally white state, shows that racism is gone as a factor in American politics. On the Republican side, Huckabee’s win shows how a truly compassionate conservative can win by harvesting voters who want the message of concern for the poor and for values to prevail.

But what of Hillary? She’s down but she’s not out. Hillary Clinton, in the first really contested election of her own political career, lost dismally-- outclassed, outdrawn, and outpolled by Barack Obama.

Her campaign professionals (including Bill) decided to stress experience, precisely the wrong message in a Democratic primary. Prematurely appealing to the center and abandoning the left, she fell between two chairs – not sufficiently centrist to win independents or liberal enough to attract Democrats.

On the Republican side, Huckabee brought a new phenomenon into politics. A New Testament Christian politician, he takes the Biblical message to the center-left, clothing the naked and feeding the hungry. His refusal to indulge in negative advertising sent a message to Iowa voters showing his strength under fire.

The Obama victory in Iowa probably presages a victory in New Hampshire and follow up victories in Nevada and South Carolina. (Hillary will win Michigan be cause she is alone on the ballot). Suddenly, Hillary’s argument that she should be the candidate because she has a record of defeating the “Republican attack machine” will backfire. Sold as a winner, she will be exposed as a loser. The overhang of Iowa will dog her for all of the early primaries.

Particularly important for Obama is the poor finish of John Edwards, who has campaigned in Iowa for six years. Now Obama can count on being the nearly unanimous choice of the anti-Hillary voters. No longer will the vote be divided.

Hillary faces a serious problem: Voters rejected her and rejected Bill on a very personal basis. Iowa was a referendum on Hillary and she lost 30-70. Her argument of experience only reinforced her phoniness and her issues positioning showed how contrived her ideology is. This is a stinging personal defeat for Hillary.

But what will happen next? With the limelight comes the spotlight. Obama will suddenly become the putative candidate of the Democratic Party and will be subject to the scrutiny that comes with the title . Can he weather the examination?

Perhaps not. Democrats may turn on Obama, worried that he may not win in November. The doubts about Obama, up to now hidden behind concerns about Hillary’s candidacy, will be on center stage. I wonder if he can stand the scrutiny.

Much the same process will evolve on the Republican side. Ignored in the Iowa result, Giuliani appears to be in even worse shape than Hillary with his fifth place finish. But the same process that will unfold for the Republican Party may take place on the Democratic side. Voters may wonder if all that stands between the White House and the Democratic Party is a Mormon, a Christian evangelical, and a 70-year old. Rudy, like Hillary, may look better once the rest of the field unfolds.

But don’t write off Obama or Huckabee. Their appeals are truly unique and obviously resonate with voters. Their approaches are now and the outcome shows how relevant their message is.