Hillary Had No Role in Irish Peace, Despite Bill's Claims 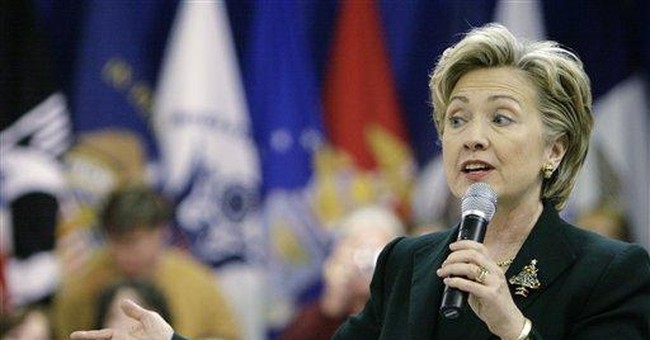 Recently, as only Hillary can do, she claimed that she was “deeply involved in the Irish peace process.” Bill has also picked up the theme, citing her “independent” role in resolving the centu ry-old conflict as “experience” with which to justify a White House run.

How odd that Hillary forgot to mention her pivotal role in Ireland just four years ago, when she wrote her $8 million memoir, Living History. There, she told a very different story.

Her first mention of Ireland was in a discussion of Bill’s October 2004 trip:

“The trip highlighted Bill’s milestones in foreign affairs. In addition to his pivotal role in easing the tensions in the Middle East, he was now focusing on the decades Long Troubles in Northern Ireland.” (Emphasis added)

No memories of her own involvement in the Irish “troubles.”

Ireland next appeared in Hillary’s memoirs in 1995, when the Clintons visited Belfast and Dublin. According to Hillary, while Bill met with the “various factions” of Irish politics, Hillary met with women leaders of the peace movement. Rather than discuss the difficulties of the peace process, Hillary focused on a teapot used by the women:

“They poured tea from ordinary stainless steel teapots, and when I remarked how well they kept the tea warm, Joyce insisted that I take a pot to remember them by. I used that dented teapot every day in our small family kitchen in the White House...”

Other than to describe the women’s fear when their sons left the house and their support for a ceasefire and an end to the violence, Hillary doesn’t cover much policy.

She then describes a visit to Derry to meet John Hume, the charming Nobel Peace Prize winner, where “tens of thousands thronged the streets in the freezing cold to roar approval of Bill and America, and I was filled with pride and respect for my husband.” (Emphasis added)

After Derry, the Clintons went to Belfast to light the Christmas tree in front of City Hall. Following the ceremony, they attended a reception.

No mention of Hillary’s deep involvement.

From Belfast, the Clintons flew to Dublin, where Hillary addressed a group of women from both Northern Ireland and the Irish Republic. According to her recollections, she “praised the bravery of Irish women who had stood up for peace.”

Hillary returned to Ireland in 1997 where she attended a dinner in Dublin for Prime Minister Ahern and then flew to Belfast where she gave a speech in honor of the late Joyce McCartan, a respected promoter of peace and the women who had given Hillary the stainless teapot a few years earlier. Hillary brought the teapot back to Ireland with her as a tribute to the women of Ireland who sought peace. Hillary also attended a roundtable discussion with young Catholic and Protestant representatives.

In describing August 1998 in her book — the month when Ken Starr granted Monica Lewinsky immunity — Hillary lists world events, such as the end of the Soviet Union, and free elections in South Africa. She also mentions in passing that: “The peace talks and cease-fire were successful in Ireland.”

End of story. Nothing about her role in that process.

Later, she describes the setback to the peace process in Omagh, Northern Ireland, where a car bomb killed 28 people and injured hundreds of others, “damaging the peace process that Bill had worked so long and hard to nurture with Irish leaders.” (Emphasis added)

Hillary does recall that in her meetings with women in Ireland, she’d spoken with them about the troubles and how to find a way to “achieve peace and reconciliation.” But she turns that into a discussion of her own personal problems with Bill and Monica, “Now that’s what I had to try to do in the midst of my own heartbreaking troubles.”

Hillary makes one last mention of Ireland in her book, citing the important role of her husband and former Sen. George Mitchell in the peace process.

Bill’s memoirs are also totally devoid of any memories of any role at all by Hillary in the peace process. Other than the Christmas tree lighting and attending receptions and meeting celebrities — Bono, Seamaus Heaney, etc. — there is nothing substantive about Hillary.

In elaborating on her so-called role in the Irish peace process, candidate Hillary now says:

"And I know it’s frustrating. It took years before the Catholics and the Protestants before Sinn Fein and you know, the DUP would even talk to each other … I mean George Mitchell sat at a table sometimes for hours and nobody would say a word or if they would they would say: 'would you tell him this?' Or 'here's what I think'. And that went o n for years. But eventually there were breakthroughs. You could build enough trust and connection."

So what does that have to do with her and what was her deep involvement in the Irish peace process? Hillary never explains.

But Bill Clinton said, as he desperately tried to help Hillary overcome her new found deficit in Iowa, that an unnamed man had said that Hillary had played "an independent role in the Irish peace process.”

Clinton offered no explanation of who the anonymous man was or what exactly this “independent” role was for Hillary.

But Bill does describe his own role — and Hillary was nowhere to be found:

"Good Friday was one of the happiest days of my presidency. Seventeen hours past the deadline for a decision, all the parties in Northern Ireland agreed to a plan to end 30 years of sectarian violence. I had been up most of the night, trying to help George Mitchell close the deal. Besides Georg e, I talked to Bertie Ahern and Tony Blair, David Trimble, and Gerry Adams twice, before going to bed at 2:30 a.m. At five, George woke me with a request to call Adams again to seal the deal.”