Bill Clinton not to meddle with Hillary and Obama feud 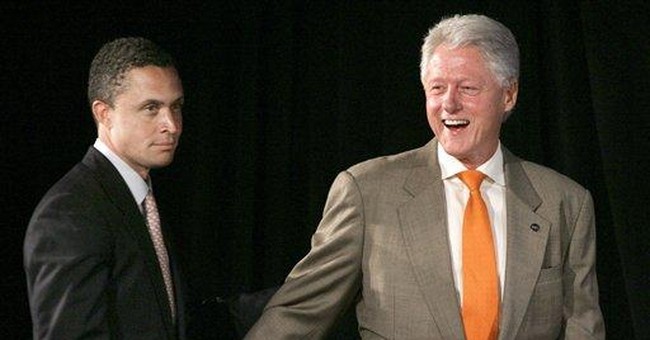 The clearest indication that Hillary's direct and personal attack on Obama last week was a failure is the fact that Bill sounded the retreat in his speech this week at the Democratic Leadership Council (DLC).

Mrs. Clinton pounced on Obama, calling him "naive" and "irresponsible" for saying he'd meet with leaders of rogue nations personally. It was the first time Hillary has criticized Obama in person and by name. Her strategist, Mark Penn, described her attack as "part of an unfolding strategy."

But at the DLC, Bill Clinton said he was not going to get into the middle of "that little spat" and obfuscated the differences between Hillary and Obama by saying the candidates all agreed on the big picture.

“We have to get back to more diplomacy,” Clinton said. “I’ve heard no fewer than four of our candidates say in the last month ... that in the middle of the cold war, in the darkest hours, we never stopped talking to the Soviets at some level. So no one disputes that.

How did Hillary's major offensive against Obama become "that little spat?" What happened? No doubt, Bill and Hillary read the poll showing that Obama had 55 percent of the Democrats with him as against only 22 percent for Hillary on this issue. (This data is from Rasmussen's daily tracking poll but certainly the Clintons have their own data showing the same thing).

In so many ways right now, Obama has Hillary on the defensive. His well-aimed shots are having their impact in the early primary states but have yet to affect the national polling numbers.

• Obama boldly stepped out in front of Hillary over terrorism indicating that he would send U.S. troops into Pakistan to find bin Laden and lashed out at Pakistani leader Musharraf's failure to pursue Al Qaeda with sufficient vigor.

• The Illinois senator is running ads in Iowa and New Hampshire and has begun closing the gap with Hillary in these key early states. In Iowa, according to the American Research Group's polling, Obama has reduced Hillary's lead over him from 19 points in June to eight points in July. In New Hampshire, the same organization has Hillary's advantage over Obama vanishing entirely. In April, she was 23 points ahead of Obama. In May, her lead dropped to 19. It was only nine points in June and the race was tied at the end of July. In South Carolina, they have Hillary's losing the lead entirely, going from 16 points ahead in June to four points behind in July.

• Hillary has not bought ads to match Obama so far because she is spooked by his fundraising success. While at the end of June, each candidate reported having a touch more than $30 million to spend in the primary, Hillary's total included $10 million she rolled over from her Senate campaign fund. Obama has amassed a 3 to 2 advantage in funds on hand for the primary raised during the first six months of the race. Since he has four times as many donors as Hillary and fewer maxxed out contributors, his edge is likely to grow.

All of this means that Hillary is facing a resurgent Obama and is desperately grasping for a handle to contain his surge. Her use of the "experience" issue against the freshman senator is increasingly ineffective as Obama shows himself to be a first class competitor in face-to-face performances. And using the issue puts her at risk of appearing to be a continuation of the same old Bush-Clinton rivalry amid an electorate gasping for change.