Bush will Have to Pull Out of Iraq, or Face Historical Obliteration 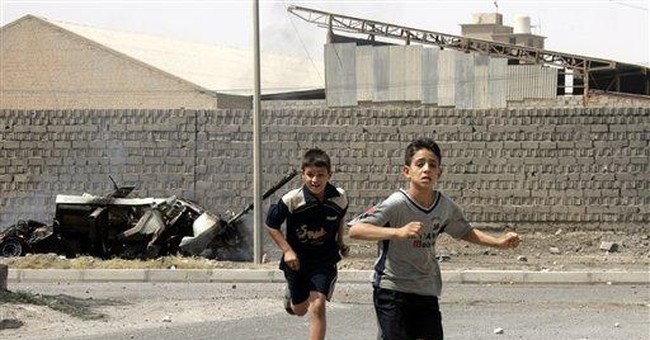 Are they traitors or prophets, these Republicans who have jumped ship and called for Bush to begin pulling out of Iraq — Sens. George Voinovich (Ohio), Richard Lugar (Ind.), John Warner (Va.), and Pete Domenici (N.M.)? More likely the latter. A look at the political map and the electoral calendar tells us that GOP Sens. Arlen Specter (Pa.), Norm Coleman (Minn.), Olympia Snowe (Maine), Susan Collins (Maine), Chuck Hagel (Neb.), Lindsey Graham (S.C.) and Gordon Smith (Ore.) are probably not far behind them.

If you haven't been counting, that comes to 11 Republican defections —enough to force a vote even if the Dems lose Joe Lieberman (Conn.). A veto override? Add in the likes of marginal--state GOP senators like John Thune (S.D.), Kit Bond (Mo.), John Ensign (Nev.), Chuck Grassley (Iowa) and a handful of others and it's possible. Retiring Sen. Wayne Allard (R--Colo.) might just do his party a favor on his way out.

The Republican senators are coming to realize that Bush needs to begin to pull out to save his party, even if it puts Iraq at risk. With the president's favorability down to 29 percent in the USA Today poll, and 26 percent in Newsweek, the party leaders are coming to realize that they are not planning to join Bush in retirement — at least not yet — and that unless he begins the pullout, the GOP cannot hold on to the White House.

Hillary's stand — demanding a start to the withdrawal but not setting an end date — gives Bush the flexibility he needs to begin to pull out and stretch the process as long as he has to in order to have some hope of achieving his objective. The back end of Clinton's position — that sufficient troops should remain to provide intelligence, logistical, air, and training support to the Iraqi Army and to prevent Iranian infiltration and hunt al Qaeda operatives in the provinces — will make it hard for her to differentiate her position from Bush's once the withdrawal starts.

The mainstream of the American public is not going to go to the ramparts over 10,000 or 20,000 troops for a few months one way or the other. For those on the left who do, they will find Hillary's proposals as unsatisfying as they are going to find Bush's slow pullout pace. Right now they don't notice the limitations on Hillary's position because Bush is against any pullout ever. But if the president begins to withdraw, the left will scrutinize the details of Hillary's program and find it wanting.

For the rest of us, Bush can defend the pace of his pullout, noting that a withdrawal while under enemy fire is the most difficult of all military maneuvers and that he must safeguard American lives and those of our Iraqi allies in the process. No reasonable observer is going to force him to commit to a set pace of withdrawal once he has begun the process in good faith.

From the point of view of Iraq, a gradual pullout makes all kinds of sense. The lesson of Vietnam is clear: If the public get so turned off on a military intervention, it will force Congress to ban any further involvement, making it inevitable that our enemies win. But if the administration salvages a modicum of public support by way of a prompt but gradual withdrawal, it will preserve the option of re--entry by air or land should an adverse situation arise. We probably could have stopped the North from winning in Vietnam had Congress not banned any air or ground involvement after 1974. We must not fall into the same trap in Iraq.

Besides, beginning a pullout may even force the government in Baghdad to get moving on real reforms in the distribution of oil revenue and the sharing of political power in the hope of slowing the pace of the withdrawal.

But Bush faces a stark choice: If he doesn't begin pulling out, his party will lose the White House, lose Congress by stunning and likely filibuster--proof margins, and his tax cut and education reforms will be repealed. His footsteps will be obliterated from history. It will be as if he never served.

And if Bush doesn't get it in time, there are enough sensible Republican senators to give him a wake--up call.