Do the Clintons Now Support Jail Time For Perjurers? 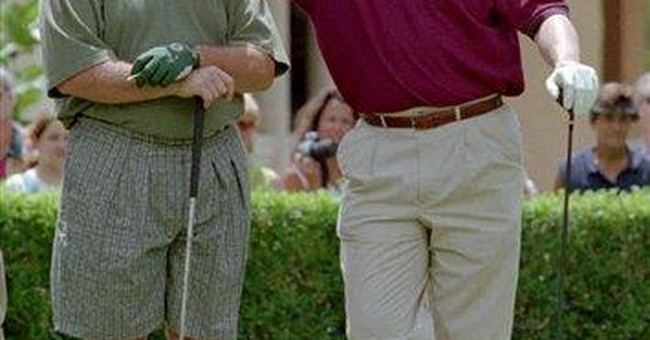 Does that mean that they now think that perjurers should go to jail? Or have they simply forgotten about Bill Clinton's own plea agreement in the last hours of his presidency — for making false statements under oath? Some people would call that perjury.

One would have thought that Hillary and Bill Clinton wouldn't touch the Libby executive clemency issue with a ten-foot pole — for lots of reasons.

After all, Bill Clinton has a well-earned reputation as the king of pardons — granting 140 of them during his last minutes in office — with many going to terrorists, people who had paid Hillary's brothers to arrange for pardons, contributed money or key support to Hillary's Senate campaign, given the Clintons expensive personal gifts, and/or made large contributions to Bill Clinton's Presidential Library. One of the pardons went to Bill's own brother, Roger, while another went to Susan MacDougal, who kept quiet about Clinton during the Whitewater trial.

Given the disgraceful Clinton record on pardons, most reasonable people would have kept quiet — especially when Libby's offense was so similar to Bill's own criminal conviction. But the self-righteous former first couple couldn't resist. Once the clemency was announced, Hillary immediately attacked President Bush, saying, "This commutation sends the clear signal that in this administration, cronyism and ideology trump competence and justice."

Hey, Hillary, do you understand what cronyism really means?

Cronyism is favoritism shown to friends and supporters without regard to their qualifications. And that's what Bill Clinton's pardons were all about. Except, as usual, the Clintons went way over the top. So, in addition to granting pardons to undeserving friends, Bill Clinton also pardoned undeserving strangers who paid his family, friends, campaign coffers, and presidential library.

Now Bill and Hillary claim that his highly controversial pardons were "different" than the Libby clemency.

The big difference was that many of the Clinton pardons were patently bought and paid for — something event he Clintons don't claim to be the case in the Libby commutation.

Hillary's brothers were paid more than $500,000 to lobby the president for pardons that were then granted to con artists and drug dealers. For a fee of $400,000, Hugh Rodham successfully pushed for a pardon for drug kingpin Carlos Anabel Vignali, convicted of shipping a half-ton of cocaine from L.A. to Minnesota. His father was a big contributor to the Democratic Party — he gave more than $150,000 to the Los Angeles Democrats. Obviously, the investment was a shrewd one.

That's cronyism, Hillary. Get it?

Tony Rodham advocated a pardon for Edgar and Vanna Jo Gregory. The Gregorys, who owned a carnival company, defrauded a federal bank. When the pardon was publicized, Hillary stated that Tony was "not paid" by the Gregorys for his work on the pardon. Tony repeated that line on the Larry King Show.

After an investigation, the House Government Operations Committee disagreed and announced that Hillary's statement was inaccurate. Now, a federal bankruptcy court overseeing the carnival company's bankruptcy is about to rule on whether over $100,000 paid to Tony Rodham at the time of the pardons was a loan or payment for "consulting."

The Gregorys contributed over $100,000 to Hillary's campaign and other Democratic causes. These folks were well known to the Clintons — they visited them at Camp David and were hired to stage two carnivals on the White House grounds — paid for by the taxpayers.

When the Rodham brothers' exploits were made public, Bill and Hillary announced that they were "shocked and saddened" by the disclosure. At the time of the pardons, the Rodham brothers were actually living in the White House with the Clintons and had made contact with the highest level of presidential assistants. But the Clintons claimed that they were totally unaware of what Hugh and Tony were doing.

But, it wasn't just Hillary's family who benefited from the Clinton cronyism. Bill's brother Roger was pardoned for his drug conviction, and he was allegedly paid $30,000 to promote six felons — although those pardons were never granted.

The most outrageous Clinton pardons went to sixteen members of the terrorist gang, the FALN, a Puerto Rican nationalist group responsible for over 130 bombings in the U.S. — attacking the N.Y. office of the FBI, military recruiting headquarters, and even former president Jimmy Carter's Chicago campaign office. Six people died and dozens more were injured as a result of FALN's actions. These terrorists never even asked for a pardon, but because Hillary wanted to ingratiate herself with the Hispanic population in New York during her first Senate race, they were suddenly granted a commutation of their sentences.

Although the commutations were opposed by the FBI and the Clinton Justice Department, Bill Clinton granted them to all 16 terrorists. Once again, Hillary claimed to have "no involvement in or prior knowledge of the decision." Her statement is ridiculous. Two days before the announcement of the pardons, New York City Councilman Jose Rivera personally presented Hillary with a packet of materials including a letter asking her to "speak to the president and ask him to consider granting executive clemency to the prisoners." What a coincidence — the sentences were immediately commuted!

Hillary, that's another example of cronyism.

Joe Connor, the son of one of the innocent men killed by the FALN terrorists at the Fraunces Tavern in Manhattan, put it this way:

"The Clinton family traded the release of terrorists for votes, votes that were promised to be delivered by New York politicians to Hillary for senate and Gore for president. That was clear."

And Hillary actually has the audacity to accuse President Bush of cronyism! This woman has no shame.

Then, of course, there was also Marc Rich, the fugitive oil broker who renounced his American citizenship. Rich was illegally buying oil from Iran during the American trade embargo and hid the $200 million in trading (and over $100 million in profits) with Iraq using dummy transactions in off-shore corporations.

Ironically, Scooter Libby was one of Rich's lawyers, while Rudy Giuliani was the U.S. Attorney who brought the indictment. Amazingly, the U.S. Attorney's Office was never contacted by the White House for input into the pardon decision. Here's what the prosecuting attorney had to say about the pardon:

"I cannot imagine two people that were less suited for a presidential pardon than Marc Rich and Pincus Green[the co-defendant]. It is inconceivable that President Clinton chose to pardon the two biggest tax cheats in the history of the United States who had renounced their citizenship, been fugitives for seventeen years, and who had traded with the Iranians during the hostage crisis. While I do not know what motivated President Clinton to pardon Rich and Green, I can state that it is implausible that those pardons were based on his evaluation of the merits of the case..." [http://jurist.law.pitt.edu/pardonsex8.htm]

Interestingly, Rich's wife bought furniture for the Clinton's Chappaqua home and contributed at least $450,000 to the Clinton Library.

Finally, there were the four New Square pardons. There, the Hasidic defendants were convicted of pocketing $40 million of federal scholarship money. Hillary visited the community, and on Election Day the community supported Hillary 1400 to 12. Weeks later, on December 22, 2000, President Clinton met with the New Square leaders to discuss a pardon. Hillary attended the meeting, but claims that she did not speak.

Apparently, she didn't have to — the pardons were granted.