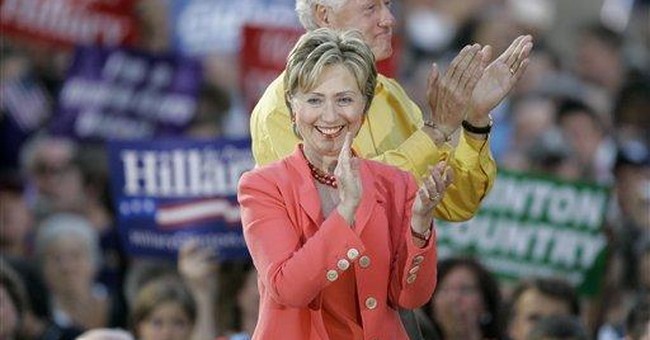 The past and the future dueled with one another over the past six months as the Obama and Clinton campaigns each worked to raise funds for the coming election - and the future won.

Sen. Hillary Clinton, married to the best fund-raiser on the planet, pursued the old, time-tested way of raising money by concentrating on wealthy donors and special-interest political-action committees. Even though Bill had refused to take PAC contributions during his 1992 race for president, Hillary openly - and eagerly - solicited them.

Meanwhile, Sen. Barack Obama pursued the new method of fund-raising by enlisting large numbers of individual donors online and abjuring PAC contributions. He reports having gotten donations from 258,000 separate individuals, while her donors total only about one quarter as many.

The future defeated the past, as Obama raised a reported $32 million for his primary campaign while Hillary came up short with only about $21 million (not counting funds that can't be spent unless she wins the nomination).

The battle of styles says less about who'll win the primary - our bet is still Hillary - than it does about where political fund-raising is headed. The Internet makes mass solicitation increasingly possible, since it is instantaneous and doesn't demand the large up-front outlays that needed for direct mail and telemarketing - the comparable strategies in the old era.

Obama's advantage should continue to grow, since his staff reports that 90 percent of his donors can keep on giving - while a great many of Hillary's contributors are "maxed out" and can't give more.

More than any campaign-finance reform laws, Obama's success - massive, rapid fund-raising without relying primarily on rich donors or special-interest PACs - suggests that a purification of the financing of political campaigns may, indeed, be at hand.

As Americans become more and more used to backing up their electoral preferences with their credit cards and as they grow more comfortable with online giving, the power of the few to make themselves felt by massive campaign contributions appears to be ebbing. Obama has now taken to the next level the massive fund-raising pioneered by Howard Dean during his 2004 run.

In the old style of fund-raising, contacts with a few wealthy fat cats was the key. Wining and dining them at state dinners and in the Lincoln Bedroom was the key to President Bill Clinton's fund-raising for his own re-election in 1996 and his wife's Senate candidacy four years later. But in the new world, the list is everything. Using ideology or charismatic personal appeal to amass a large group of donors - and keeping their e-names handy - is the key to generating mega-bucks in the future.

Not only is mass fund-raising from hundreds of thousands of donors cleaner and less susceptible to special-interest favor-peddling, it's also faster, more effective and more cost-efficient than the old techniques ever were.