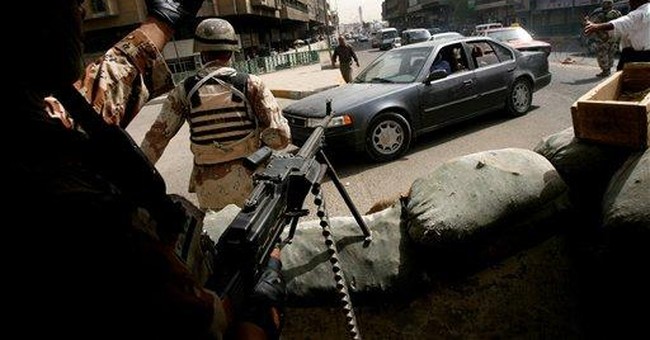 It's a good time to read Robert Dallek's new book, Nixon and Kissinger: Partners in Power, an agonizing presentation of the difficulty the two men had in figuring out how to pull out of Vietnam and end the war "honorably." Their problem was familiar to anyone who has been following the war in Iraq: We were losing. Any move to pull out American troops would inevitably be followed (as it was) by a collapse of the South Vietnamese military resistance. Impaled on the horns of their own indecision, Nixon and Kissinger kept troops in Vietnam for the administration's entire first term and only pulled them out five years after inheriting the war from Lyndon Johnson.

If she is elected president, Hillary Clinton will probably have to follow the same trajectory whether she wants to or not.

What she called "Bush's war" in the televised debate on Sunday night in New Hampshire will inevitably become Hillary's war before her first term in office is over.

As a woman, as a Democrat, from the first moment Hillary Clinton were to take office as president, she would face the task of proving herself tough enough for the job. Even if foreign leaders and our enemies do not doubt her on this score, she will feel the need to prove herself. Any signal of weakness, such as a withdrawal from Iraq, would embolden our enemies and weaken her credibility.

Remember how President Eisenhower let Khrushchev threaten to "bury" the United States without pointing out our huge lead in missiles? As a former general with an illustrious past, he had no worries about his credibility on military issues. But former 2nd Lt. John F. Kennedy had reason to worry that his bona fides as a military leader might be questioned, and he hastened to tell the world that the U.S. had a huge lead in missiles (after winning the election of 1960 campaigning on the "missile gap"). The price for JFK's insecurity was, ultimately, the Cuban Missile Crisis, as Khrushchev felt he had to close the gap Kennedy had publicized.

Hillary Clinton will not be able to pull out of Iraq.

Pay no attention to her politically motivated vote to "end" the war by cutting off funds or her support for a mandatory withdrawal schedule. Both votes were cast in the heat of a presidential race in which she cannot allow Edwards or Obama to flank her to the left.

But do pay attention to her interview with The New York Times a few months ago in which she said that she would keep sufficient troops in Iraq to provide training, logistical support, air support and intelligence to Iraqi forces and to police the border with Iran to prevent infiltration and to hunt down al Qaeda operatives throughout the country.

As much as she would like to, Hillary cannot back away from these missions.

Remember how long it took Bill Clinton to withdraw even a token force from Somalia after the Mogadishu killings? It was almost six months before our forces pulled out. We couldn't be seen to be fleeing after our troops were killed and their bodies dragged through the streets by the local warlords. A withdrawal from Iraq would be even more complicated.

The most likely course of events is that Hillary will undertake a limited withdrawal (if Bush has not already done so) but will be forced either to keep a substantial force on the ground or to add to it if the military situation proves untenable.

The Democratic left does not realize that simply pulling out is not a viable political or military option and that no president, of either party, is going to pursue it. And particularly not a woman with hawkish inclinations during her first year on the job.