Hillary Clinton Defends Use of Corporate Jet for Family Vacations 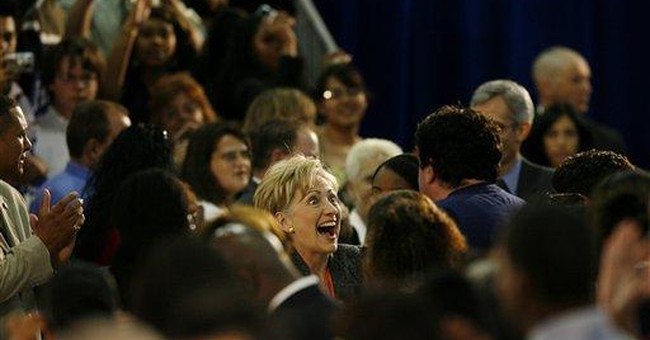 On Wednesday, Hillary Clinton was challenged by the press about the Clinton family’s acceptance of more than $900,000 in free private travel from Infousa, a company linked to scamming the elderly.

Her reply? She said that she had complied with all Senate ethics rules and reimbursed the company for the amount of a first class air ticket — usually about 1 percent of the cost of the luxurious private jet travel. According to Hillary, “Those were the rules. You’ll have to ask someone else if it’s good policy.”

In other words, get lost.

Is there anyone out there who would say it's good policy for a U.S. senator and presidential candidate to accept apparently tax-free gifts of almost a million dollars from a corporation — especially a corporation involved in providing lists of vulnerable elderly people to scam artists?

And it’s not like the Clintons couldn’t afford to buy an air ticket — the family income since 2001 has been more than $63 million! So why do they have to freeload from rich friends?

Well, evidently Hillary doesn’t think that she should be the one to consider whether it makes ethical sense to have rich pals pay for a U.S. senator’s family vacations.

That’s up to “someone else…”

But, Hillary has decided it is up to her — and not someone else — to determine whether corporate policies that allow huge payments and perks to CEOs make good policy. And her answer is a resounding, "NO" … unless, it seems, if she’s benefiting from the perks.

When Senator Clinton condemns corporate greed and attacks over-the-top CEO compensation, she’s not talking about her close friends in the business world. No, to her, they’re different. In the Clintons' case, it’s OK to use corporate assets to fly her and her husband to jet-set vacation spots all over the world, including a $146,000 plane ride to Acapulco for a Clinton family holiday in January of 2002.

It’s the other corporations and CEOs out there that she’s targeting. They’re the greedy ones that have to be regulated.

Last week, we revealed that former president Bill Clinton was on the payroll of Infousa, the Nebraska company that supplied lists of vulnerable elderly people to con artists who then defrauded the unsuspecting victims. Internal e-mails suggest that employees of Infousa were aware that some of their clients were under investigation for these revolting predatory practices.

Since 2001, Infousa has paid Bill Clinton $3.3 million, although it’s not at all clear what he was supposed to do for the money — other than fly on the company’s jet for vacations and golf games with Infousa’s CEO. Infousa CEO, Vin Gupta, has made the Infousa corporate jet available for the Clintons to travel in style to Hawaii, Switzerland and Jamaica — at a cost of more that $900,000.

Some of the shareholders of the company agree wholeheartedly with Hillary’s public position about overpaid CEO’s. Here’s what the Senator had to say:

“We need to open up CEO compensation to public scrutiny and public challenge and ensure that boards of directors are independent when determining CEO pay.”

In a lawsuit filed earlier this year, shareholders of Infousa claimed that the payments to Bill Clinton and the use of the corporate jet by the Clintons were a “waste” of corporate assets and were not “business related.” Infousa actually claims that all of the Clinton trips — even the vacation excursions — were business related.

Hillary Clinton has no words of criticism for the man who contributed at least $1 million to the Clinton Library and $2 million towards her incredible $16 million millenium New Year's Eve party, and hundreds of thousands to her campaigns and the Democratic Party.

Clinton’s financial disclosure forms never mention the trips provided by Infousa and until the lawsuit was filed, the Clintons released no information about how much Bill was paid — only declaring that it was “more than $1000.”

Hillary just doesn’t get it — and never will.

Just yesterday, she actually lectured about the need to control corporate pay to executives — unless, of course, they’re providing freebies to her and her family.

Team DeSantis Scores a Victory Against Jen Psaki
Townhall
'Who's going to take the shot?' The RNC has come out with its own compilation video of Democrats casting doubt on the vaccine they're urging you to take
Twitchy
Yikes: Joe Biden Freaks When Reporters Ask Him if Andrew Cuomo Should Resign
Redstate
Fourth Capitol Hill Riot Police Officer Commits Suicide: Welcome to Insanity Wrap Conspiracy Central
PJ Media