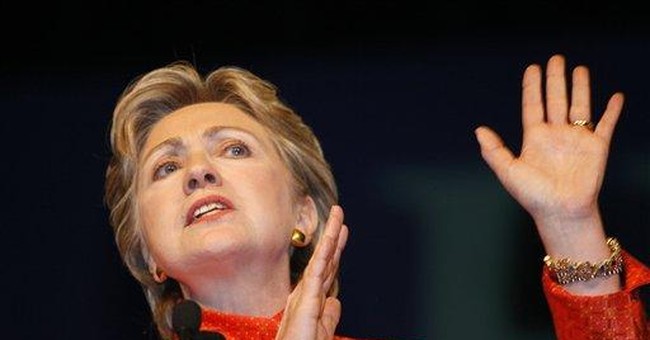 What does the defeat of Segolene Royal, the first woman to seek the French presidency, mean for Hillary Clinton, in the midst of her pursuit of the Oval Office?

Does Royal's failure signal that the seemingly irresistible momentum of female candidates worldwide is screeching to a halt?

After Angela Merkel was elected chancellor of Germany, Michelle Bachelet won the Chilean presidency and Ellen Johnson-Sirleaf took Liberia's presidency. At the time, it seemed that women were on the move globally.

Does Royal's defeat mean that the momentum is waning?

More likely to be observant Catholics, the women of France typically are the mainstay of the conservative parties. French men, who fill out the ranks of the country's powerful unions, back the Socialists.

In nominating a woman, the French Socialist Party was cutting across its normal gender lines. It would be as if the Republicans, not the Democrats, had nominated a woman to run for president.

Royal's defeat was largely due to her inability to lure women who usually back rightist candidates to cross over and back her. In France, ideology and class proved more important than gender in structuring the female vote.

On another level, the lessons of Royal's defeat are important for Hillary to learn.

After a shaky performance touring the Middle East early in her candidacy, the idea took root that Royal was unprepared and unqualified to be president. Her gaffes in seeming to side with the Palestinians against Israel were magnified. She was painted as out of her league on the global stage.

As the campaign continued, Royal embraced an explicitly female posture in the race, seeking to become the modern equivalent of Marianne (the French revolutionary who might fulfill an iconic self image as Uncle Sam does for America) and Joan of Arc, the towering medieval French heroine.

Sarkozy mocked her style, noting that she appeared to be in a bad mood and suggesting that it was due to her standing in the polls. Royal seemed to lend herself to a negative caricature of a female candidate: headstrong, impulsive, uninformed, moody, and emotional. Her posturing did not sell well.

Most ominously for Hillary is how Royal's marriage played against her. The candidate's long-term "husband" (although they were never married) is Francois Hollande, the head of the Socialist Party. She was widely seen as a stand-in for him and voters saw him as the real power behind the throne.

Will Americans cast Bill in the same role as the hidden power behind Hillary? Will it hurt her as much as it injured Royal?

At the moment, few people would say that Hillary's strings are pulled by Bill. But in 1990, when Bill was contemplating retirement as governor to dedicate himself to the 1992 presidential race, Hillary contemplated running in his place.

But polls that I conducted for Hillary showed that voters rejected her candidacy, seeing her as a puppet of her husband.

The Royal-Hollande debacle in the election sends a message to Hillary: Don't let Bill be seen as your master.