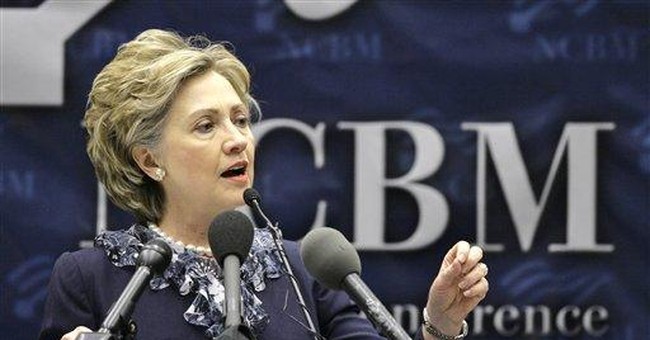 Hillary's pollster Mark Penn recently claimed that she was leading the race for the Democratic presidential nomination in all states in all the polls. Not so fast, Mark.

The latest Rasmussen poll, concluded on April 26, shows Sen. Barack Obama ahead of Sen. Clinton for the first time, albeit by the slim margin of 32-30. Two weeks ago, Rasmussen had the race tied; before that, he had her constantly in the lead. Almost all the national polls show Clinton's lead dwindling, and most show her with only a single-digit lead over Obama.

The sense of Hillary's inevitability as the Democratic nominee is clearly vanishing.

Why is Clinton losing steam? Because we are discovering that we don't like her. Gallup has her favorability rating dropping from 58 percent in February to only 45 percent in April. The decrease in her popularity spans all demographic groups. Gallup has her dropping sharply even among her core constituencies: Democrats, liberals and single women.

Her popularity has dwindled not because she is under fire or being hit with negatives. And, for once, she's not being chased by scandal. She's falling simply because she doesn't come across well. As Americans get to know Clinton better, they are coming to regard her as scripted, dogmatic, defensive, rigid and programmed.

So what happens next?

Hillary's strength is the demographic basis of her candidacy. Because single, white women cast at least a quarter of the Democratic primary vote - and Clinton is also very popular among Latinos - it's hard to see how she can drop much below 30 percent in the Democratic field. Even if Obama passes her, he's unlikely to surge way ahead.

The race may turn into a contest reminiscent of the 1980 primaries between Sen. Ted Kennedy and President Jimmy Carter, in which each candidate was beset by negatives and seemed to fall, only to rebound when people focused on his rival. Carter would win a primary, and then voters would remember the hostages and run to Kennedy in the next week's balloting. Then, after Kennedy won one, they'd recall Chappaquiddick and migrate back to Carter.

So the 2007 skirmishing may go - though in the polling, in the long runup to the actual primary voting. Voters, turned off by her manner and style, may recoil at the prospect of a Hillary Clinton presidency and switch to Obama. Then - fearful of electing an inexperienced ingénue during a war - they may flock back to Clinton. And the cycle may repeat itself, in poll after poll.

The wild card is ex-Sen. John Edwards. If Obama and Clinton both vote to fund the war in Iraq, accepting the mealy mouthed compromise House Speaker Nancy Pelosi and Senate Majority Leader Harry Reid are likely to negotiate with President Bush, Edwards - who will demand a timetable for withdrawal in any such bill - will have the Democrats' left wing to himself.

If Edwards gets the left - forcing Obama to share the anti-Clinton vote - the Illinois senator could drop to third.

With Hillary no longer the inevitable nominee, though, it's anybody's guess how the process will unfold.