Hillary's Experience is at Surviving 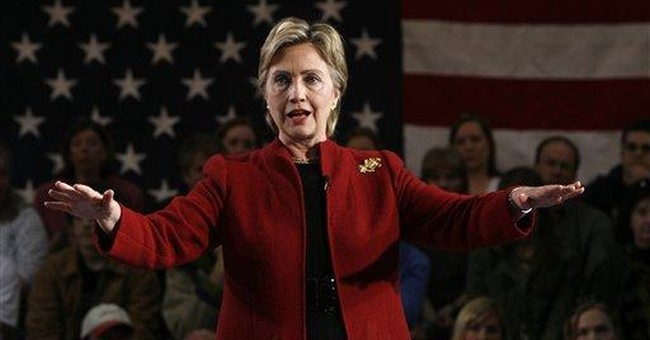 Polls suggest that the leading attribute attracting voters to Hillary's presidential candidacy is her "experience," a virtue which contrasts, presumably, with the lack of it in Senator Barack Obama, her chief rival. But a close examination of her record as first lady and as New York Senator suggests that her experience is largely in the avoidance of death by scandal. Were it to be captured in a television series, it would certainly not rise to the level of "Commander In Chief" and probably not even to that of "West Wing." It would find its televised metaphor in the reality series "Survivor."

Consider what her experience has been. She burst forth on the national stage with two tasks in her husband’s administration: The selection of the nation’s first female Attorney General and the design and adoption of a comprehensive program of health care reform. Her efforts to designate an Attorney General hamstrung the new Administration for months as two nominees, in succession, had to withdraw their names from consideration. Finally, at the eleventh hour, she urged her husband to appoint Florida’s Janet Reno, a selection Bill Clinton would come to describe as “my worst mistake.”

In the bargain, she suggested the appointment of Lani Guanier as head of the civil rights division, a job she was shortly forced to relinquish when her radical views became known, another embarrassment for the new Administration. Her other selections for the Justice Department, the White House staff and the Treasury were her three law partners: Web Hubbell, Vince Foster, and William Kennedy, appointments which culminated in one imprisonment, one suicide, and one forced resignation.

Her other assignment, health care reform, collapsed in such a debacle that it cost her party control of both houses of Congress, a fate from which it took twelve years to recover.

Beyond these initial tasks, her main focus in the Administration was scandal defense. From Jennifer Flowers to Whitewater to the FBI file affair to the travel office firings to her Commodities Market winnings to the missing Rose Law Firm billing records to the Paula Jones scandal, she orchestrated the Administration's defense against scandal allegations. In the process, she almost got herself indicted for perjury and obstruction of justice.

And her advice in handling these matters was uniformly bad. It was Hillary who counseled Bill not to settle the Paula Jones lawsuit even when the plaintiffs called for neither an apology nor payment and she who stonewalled the release of Whitewater documents even when it led to the appointment of a special prosecutor. When the prosecutor whose appointment she had caused heard about the depositions in the Paula Jones case she had refused to settle, the Monica Lewinsky scandal eventuated.

During the period of 1995-1997, the period of the Clinton Administration's greatest achievements, she was nowhere to be seen, focusing instead on writing It Takes A Village, and on dodging criminal inquiry. She did not participate in the formulation of a balanced budget, nor in welfare reform legislation, nor in the reduction of crime that stemmed from the 1994 anti-crime bill.

Her experience continued when her race for the Senate and its aftermath became, in turn, mired in scandal. The pardon of the FALN terrorists to get Latino support in New York, that of the New Square Hassidim to get Hillary Jewish support, and the clemency shown toward Hillary's brothers' clients to get them financial support caused her ratings to plunge to their lowest level in March of 2001 as she took her Senate seat. The theft of White House gifts, almost $200,000 of which had to be returned, did nothing to endear her to the electorate.

Since then, Hillary has done nothing of note in the Senate except to vote for the Iraq War, a position she has since disavowed, and to win the applause of her colleagues for not being partisan and obstinate. Her main efforts have been directed at raising massive sums of money for herself and her colleagues and making a lot writing and selling her memoirs. Her efforts on behalf of New York after 9-11 have been exposed as largely derivative of those of her colleague, the more effective Chuck Schumer.

She has passed no important legislation, except for twenty bills renaming post offices and courthouses and congratulating Alexander Hamilton, Shirley Chisolm, Harriet Tubman, the American Republic, and the Syracuse men's and women's Lacrosse team on their respective accomplishments.

If this the experience upon which her candidacy is based? Did I leave anything out?

Conservatives, Stop Falling in Love with Politicians
Townhall
Can we be honest about who is supportive of the evil acts of the Buffalo shooter ... no partisan division here
Twitchy
Biden Admin Pulls a Fast One, Swiftly Changed Status of Five Foreign Terror Groups Friday
Redstate
Here's What the Buffalo Shooter's Alleged Manifesto Actually Says
PJ Media