Members Stand Up to Iran 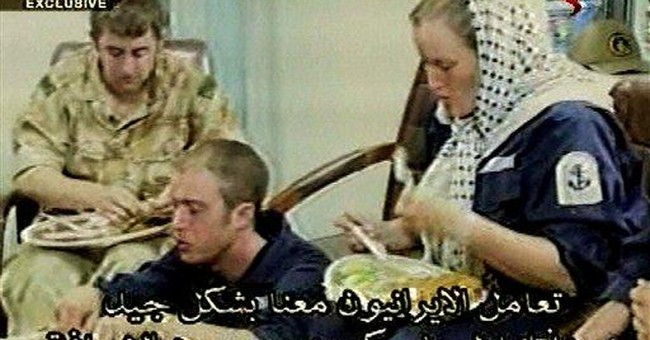 How should the United States respond to the proliferation of deadly roadside explosives in Iraq manufactured and developed in Iran?

And how to react to the capture by the Iranian Revolutionary Guard of 15 British Marines and sailors in Iraqi territorial waters?

What should we do about Iran’s continued refusal to halt its nuclear enrichment program even in the face of twice-imposed United Nations sanctions?

We should pass — and the president should sign — the Dodd-Lantos bill mandating economic sanctions on any foreign company that aids Iran’s energy industry. Domestic companies are already prohibited from such investments.

This Democratic bill, cosponsored by Sen. Chris Dodd (Conn.) and Rep. Tom Lantos (Calif.), is a bold piece of legislation that strikes at the core of Iranian vulnerability.

And, in a singular act of courage and dedication to principle, Republican presidential candidate Congressman Duncan Hunter (Calif.) has added his name to the legislation as a cosponsor. Hunter’s action is particularly admirable since the bill is designed to force the Bush administration to impose sanctions passed in the 1990s but disregarded by both presidents, Clinton and Bush, ever since.

The Dodd-Lantos bill would omit the national security waiver Clinton used twice to stop the sanctions from taking effect. The waiver was inserted at the insistence of then-National Security Advisor Sandy Berger (before he started stealing documents in his socks). For his part, President Bush has not even waived the law, he just hasn’t applied it at all.

The original sanctions legislation provided a variety of punishments that the president had to impose on foreign companies that invest in Iran’s oil and gas industries. These ranged from barring their participation in underwriting Treasury issues to prohibiting them from receiving export-import financing, as well as certain government contracts. The sanctions were so effective that they triggered howls of outrage from European governments that objected to what they called “extraterritorial” assertions of American power.

Presumably neither Bush nor Secretary of State Condoleezza Rice wants to rekindle the war of words with European governments, so they have not applied the sanctions that remain on the books. They probably worry that to do so would shatter Western unity in the face of Iranian aggression and the threat of nuclear-weapons development.

But as Dodd, Lantos, and Hunter all realize, once the president and the secretary of state are stripped of the ability to waive the sanctions, they become a potent tool to stop European companies like Royal Dutch Shell, BNP, Total and Repsol from helping Iran tap its massive oil and gas reserves. The Bush administration people can plead that Congress is forcing their hand and foreign governments would just have to live with the consequences. Like the old Jackson-Vanik Amendment, which forced presidents to deal harshly with the Soviet Union as long as it barred Jewish emigration, the Dodd-Lantos bill would be a very effective tool in bringing Iran to heel.

We tend to overlook how vulnerable Iran is to economic pressure. Blessed with the second largest oil reserves in the world — after Saudi Arabia — its petroleum production has, nevertheless, dropped from 6 million barrels per day under the shah to a mere 3.9 million today. As a result of surging domestic demand — growing at a rate of 10 percent annually — and falling production, Iranian oil and gas revenues are dropping from $55 billion in 2006 to a projected $44 billion this year. Since these funds account for four-fifths of total government revenues, this falloff directly translates into cutbacks on the government subsidies and social programs the government uses to maintain its slender margin of support among the largely young, unemployed, and restive population. Since less than half of the Iranian population is Farsi and there is no ethnic cohesion to hold the nation together, subsidies like that which keeps gasoline at 35 cents per gallon are vital cogs in the regime’s bid for stability.

The U.S. can undermine the regime’s ability to rule and trigger its overthrow by imposing tough economic sanctions, and nothing makes more sense than the legislation Dodd, Lantos, and Hunter are urging on the Congress.