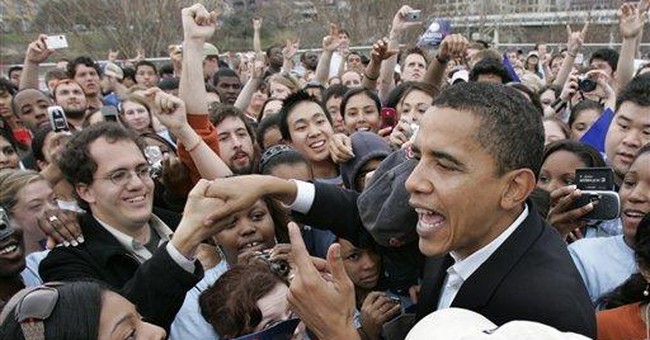 Will March 4, 2007, the 42nd anniversary of the Selma, Ala., march for voting rights, propel Sen. Barack Obama’s (D-Ill.) presidential candidacy with the same force that Sept. 11, 2004 energized George W. Bush’s pursuit of a second term? The day clearly belonged to Obama, despite the efforts of both Hillary and Bill to turn it into Clinton Day. Obama’s speech was inspirational, challenging African-Americans to assume responsibility and participate in the political process.

By contrast, Hillary’s speech, replete with a phony Southern drawl — the same one she used to effect in Arkansas — smacked of pandering. But Hillary’s attempt to paint the events in Selma as seminal in her ability to run for president seemed forced, artificial, and contrived. She appeared to have confused the efforts of Dr. Martin Luther King Jr. with those of Susan B. Anthony and Elizabeth Cady Stanton and to have mixed up the 15th and 19th amendments to the Constitution.

But Obama’s speech seared right through to the root of the American conscience. The spectacle of an African-American running for president and speaking on the site of a 42-year-old battlefield where the very right of blacks to vote was at issue could not but inspire everyone who watched it. The effect on the polls may be significant.

At the back of the minds of every voter lurks the idea that beyond parties and candidates and issues, the election of 2008 is destined to be about making history. Whether it results in the nomination and election of the first woman or the first black, and regardless of the ultimate fate of the president it elects, it will be a watershed. Watching the events in Selma, one cannot escape the conclusion that if Obama were to be elected president of the United States, it would put a period on the sorriest chapter in American history — the one that began when the first slaves were offloaded at Jamestown. The very fact of a black president would suddenly provide tens of millions of African-American children with a role model and a guide. No longer would they look to athletes or rappers or actors for inspiration. They could behold a president.

Even those of us who still believe that Obama is too inexperienced to serve successfully as president have to be impressed nevertheless by his eloquence, poise, charisma, and stage presence. And we all must concede that the very fact of his election would do much to end racial division in America. The historic nature of the Obama quest for the White House was clear to anyone watching Sunday’s ceremonies at Selma.

So what will be the political impact of this anniversary?

It might be enough to permit Obama to challenge Hillary for first place. Previous polling has shown a real elasticity in the Democratic race that is not apparent in the Republican contest. Lacking any real opponent — with Gingrich out, Romney hobbled, and McCain fading — Giuliani may just hold onto his lead until a real right-wing challenger emerges. But Obama’s move up in the polls last week suggests a volatility in the Democratic contest that is bad news for Hillary. It may well be that the lead will change hands several times as the emotional significance of a first woman duels with that of a first black and captures the imagination of each constituency.

Left behind is, of course, John Edwards. His anti-war positioning advantage has eroded as Obama has moved wisely to preempt his turf. His healthcare proposal, while sweeping and likely popular among Democrats, seems to offer a pale comparison to the emotional epiphany of breaking down gender or racial barriers.

But, ultimately, the challenge remains for Obama and for Hillary to flesh out their uniqueness with issue positions that distinguish them. Neither of these two Democrats, nor Giuliani for that matter, can cruise to the nomination on the strength of gender, race, past heroism, or biography. Their success will hinge on their ability to translate who they are into what they are for.

How does being African-American help Obama to address the problems of poverty that plague us? How does Hillary’s gender make her sensitive to the feminization of poverty? And how is Giuliani’s heroism relevant to the policy choices of our times?

These three candidates — likely one of whom will be president — must answer these questions or watch their candidacies and the boomlets that they have ignited flare out and go cold over time.