No one dare criticize Hillary Clinton 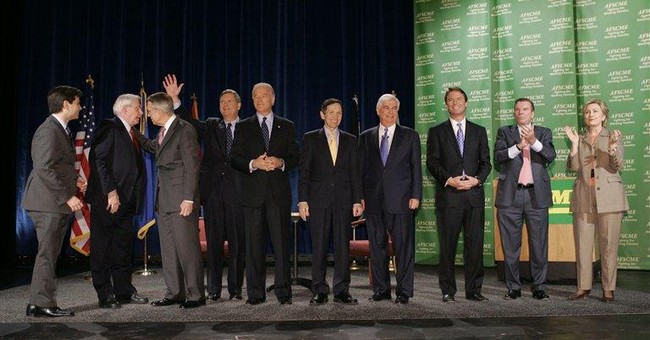 Nobody’s allowed to do it.

Certainly none of her opponents. If they dare to, Hillary sends in one of her boys, who practically accuses them of being un-American.

In January, without ever mentioning Hillary’s name and before she was even a candidate, John Edwards dared to express the view that silence on the Iraq War was “betrayal.” Ignoring the substance of Edwards’ speech, Clinton gun slinger Howard Wolfson immediately shot from the hip, attacking him for waging a negative campaign:

“In 2004, John Edwards used to constantly brag about running a positive campaign. Today, he has unfortunately chosen to operate his campaign with political attacks on Democrats who are fighting the Bush administration’s Iraq policy.”

If you like the idea of censorship of critical political speech, you’ll love Hillary Clinton as President.

To Hillary, open political discourse apparently means that her opponents and their surrogates are free to compliment her. If they do otherwise, it’s off with their heads.

Not even supporters of Hillary’s opponents are allowed to disparage her. If they do, the wrath of Hillary surfaces and it is not a pretty sight.

The latest sinner is Hollywood superstar David Geffen. Geffen used to be an avid supporter of the Clintons – he raised over $18 million for them in the past. But no more. Now the Dreamworld founder is backing Obama – and he’s not afraid to say so.

That’s why Hillary wants him banished to political Siberia.

“...I don’t think that another incredibly polarizing figure, no matter how smart she is and no matter how ambitious she is — and God knows, is there anybody more ambitious than Hillary Clinton? — can bring the country together.”

“Obama is inspirational, and he’s not from the Bush royal family or the Clinton royal family. “

“It’s not a very big thing to say, ‘I made a mistake’ on the war, and typical of Hillary Clinton that she can’t,”

Geffen also call Bill Clinton “a reckless guy” who “gave his enemies a lot of ammunition to hurt him and to distract the country.”

Hillary was outraged at what she called these ‘vicious’ and ‘personal’ attacks against her and her husband by Geffen.

Vicious? Those comments were vicious?

Yes, to Hillary, they were. So, the Clinton camp wasted no time in trotting out Howard Wolfson to once again defend the honor of the heiress apparent and call for Geffen’s head. This time even an apology wouldn’t be enough: Hillary demanded that Obama dump Geffen and return the $1.3 million that he raised for Obama because of Geffen’s negative comments about the frontrunner and her husband.

That would make things a lot easier for Hillary, wouldn’t it? In the world according to Hillary, there’s no place in politics for anyone who doesn’t love her and Bill.

Unfortunately for Hillary, Obama doesn’t seem to be shaking in his boots. In response to Hillary’s tirade, his campaign pointed out her hypocrisy and ignored her ridiculous demands. Obama’s spokesman pointedly refused to get in the middle of a Clinton- Geffen war.

“It is ironic that the Clintons had no problem with David Geffen when he was raising the $18 million and sleeping at their invitation in the Lincoln bedroom. ...It is also ironic that Senator Clinton lavished praise on Monday and is fully willing to accept today the support of South Carolina Senator Robert Ford who said if Barack Obama were to win the nomination, he would drag down the rest of the Democratic Party because he’s black.”

(Remember Ford: he’s the guy that signed a $200,000 contract with the Clinton campaign right before he endorsed Hillary)

Hillary has never been tolerant of open political debate if that means people can legitimately criticize or publicly disagree with her. Now she’s become even more dogmatic, arrogantly believing that her frontrunner status is tantamount to a coronation. She seems to believe that it is an act of war for a fellow democrat to even challenge her for the nomination. If they disagree with her, they need to be punished and sent to their room.

Watch for more of this imperial behavior. It’s her trademark and it will be the signature of a Hillary Clinton presidency. She learned a thing or two from Richard Nixon.