Hillary and Rudy could wrap it up this year 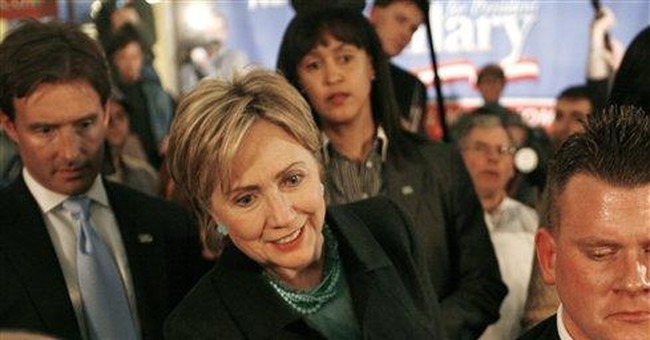 The nominees for the 2008 presidential race will be selected in 2007. The tempo of the new political process, driven by 24-hour cable news, Internet bloggers, conservative talk radio, and liberal NPR is so rapid that the nomination race cannot exist in stasis waiting for Iowa, Nevada, New Hampshire and South Carolina to get around to holding their votes in early 2008. Well before they open their caucuses or polling places, this nomination, in each party, will have been decided by the national media coverage during 2007.

In 2004, we saw the precursor of this expedited process when Howard Dean upset Kerry’s early lead in the fall of 2003, propelled ahead by his Internet fundraising and antiwar positioning. Then, in December 2003, the establishment media unloaded on the former Vermont governor — likely driven by disinformation passed around by other Democratic candidates — and he was gone by Christmas. Kerry’s victory in Iowa a few weeks later was no more than a projection on the Iowa screen of the results settled at the national level the previous month.

A recent Gallup poll found that 35 percent of Americans — probably everyone who votes in a caucus or primary — watch cable news stations frequently. The intensity of viewer and voter interest and the ubiquity of the political coverage on these stations force the process to accelerate and to come to an early conclusion.

What is the role for the early, small caucus/primary states in 2007? They will not have held their primaries or caucuses yet, but the state-by-state polls published regularly in 2007 become the equivalent of virtual primaries in each of these states. But to win these polls, it doesn’t matter so much what happens within each small state but what is going on nationally. Hillary, for example, has moved from down in the pack to a lead in New Hampshire, and perhaps in Iowa, by announcing her candidacy nationally. Her perfunctory visits to each state likely had little to do with her surge compared to her national media efforts.

The old model — a Jimmy Carter labors in obscurity in the Iowa vineyards and then is discovered nationally after he wins there and sweeps all remaining primaries — is quaint but obsolete. Now you have to win the American Media Primary of 2007 and then your victory is ratified in the primaries and caucuses of 2008.

The importance of the front-runner

The key for the candidates is to become the early front-runner and hold the position for the first three quarters of 2007. Once that is accomplished, the nomination is probably in the bag. No clear front-runner, except for Rockefeller in 1964, has ever failed to win the nomination since the primary process became pivotal in party nominations in 1960.

Among Democrats, Kennedy in ’60, Humphrey, once he entered the race, in ’68, McGovern in ’72, Carter in ’76 and ’80, Mondale in ’84, Dukakis in ’88, Clinton in ’92, Gore in ’00 and Kerry in ’04 were front-runners who held their leads. Mondale, Clinton, Gore, and Kerry were front-runners who were briefly shaken by challengers (Hart, Tsongas, Bradley and Dean) but held on to win their nominations

So once there is a clear front-runner, he or she is likely to go all the way. This is especially true since he or she will have won front-runner status by intensive national media exposure rather than just insider chatter. With the process giving him or her so much face-time so early, the front-runner is unlikely to fade once the real primaries start.

Already the process seems to be congealing around Hillary and Rudy as tentative front-runners.

Hillary re-established the dominance she had back in the spring of 2006 by moving out to a 43 percent vote share among Democrats in the presidential primaries in the Fox News poll of January 30-31. Obama is second at 15 percent, Edwards at 12 percent and Gore at 11 percent. Hillary had been at 43 percent in a previous Fox News poll in March 2006, but slipped to 32 percent in August with most of her previous support going to either Gore or undecided. By December 5-6 of last year, she stayed at 32 percent with Obama at 12 percent, Gore at 11 percent and Edwards at 8 percent. But now, even with Obama and Gore in the trial heat, she has regained her robust 43 percent vote share again. Even though media coverage of her announcement and Iowa tour was mixed, the electorate is obviously thrilled at the prospect of a woman candidate and rallied to her banner last month.

There is still time for Obama to recapture the charisma he seemed to have going for him over Christmas through his book, his articulateness, his moderation and his novelty; or for Edwards’s tough antiwar and healthcare positions to eat away at Hillary’s base. But they had better get it untracked pretty soon.

Among Republicans, Rudy Giuliani is eclipsing John McCain for front-runner status. In the most recent Fox News poll among GOP voters, Rudy had a convincing 34-22 lead over McCain, with Gingrich in third place at 15 percent. McCain has been hovering in the low 20s all along. In March ’06, he was at 22 percent, in August at 25 percent and in December at 23 percent. But Giuliani has shown steady progress from 27 percent of the vote in August to 30 percent in December to 34 percent at the end of January.

This poll finding — combined with McCain’s dismal financial report for the fourth quarter of 2006 ($1.7 million raised and less than $500,000 on hand) — put him in a convincing second place after a year of sharing front-runner status with Giuliani. Do McCain’s fundraisers think he is running for Congress or president?

In the battle among second-tier GOP candidates, Gingrich is moving up and Romney is fading badly. The Fox News poll has Newt moving up from 9 percent in December to 15 percent at the end of January while Romney has dropped from 8 percent in December to only 3 percent on Jan. 30-31. In the wake of George Allen’s and Bill Frist’s withdrawals, conservatives seem to be moving away from the former Massachusetts governor and toward the former Speaker.

Should the right seek a real alternative to Giuliani, Romney’s flip-flops will likely disqualify him. Gingrich could develop momentum with his strength and intellect, but he will only become a factor if he declares and runs. If he waits on the sidelines, events will eclipse him.

Beyond Newt and Romney, GOP wannabes like Huckabee, Brownback, Hunter, Tancredo, Gilmore and Thompson deserve some attention. Huckabee, a former client, may be the most interesting of the bunch.

Right now, neither Rudy nor Hillary has a front-runner’s lock, but they are clearly the man and woman to beat in their respective parties.

If they hold their leads through Labor Day, my bet is that it will be all over.