Praise for Pelosi (no kidding) 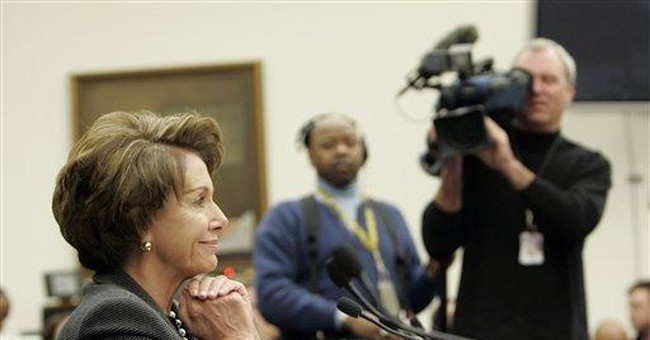 At first incoming House Speaker Nancy Pelosi (D-Calif.) stumbled, trying to foist Pennsylvania congressman John Murtha (D-Pa.) on the Democratic Caucus as its majority leader and the formerly impeached federal judge Alcee Hastings (D-Fla.) on the nation as chairman of the Intelligence Committee. But lately she has righted herself. Her recent announcement that she will keep the House in session five days a week and plans to eliminate the annual cost of living increase for legislator salaries are both bold steps in the right direction.

I don’t expect to agree with many of her policy positions, but she has staked out some turf that indicates that she may really mean to scrub the institution she now heads clean.

She should now move explicitly to link indexation of congressional and senatorial pay to similar treatment of the federal minimum wage. (But she should first insist that Congress raise the minimum wage to $6.50 to match the 23.6 percent cumulative pay increase the legislators have voted themselves since they last raised the minimum wage). If Congress is going to vote itself annual salary increases to keep pace with inflation, how can it do less for the poorest workers in our economy?

Forcing her colleagues to meet Monday through Friday is a real revolution. During 2006, the House of Representatives only met an average of two days per week — about 100 days for the entire year. The vaunted Tuesday-to-Thursday club became the Tuesday-night-to-Thursday-morning club as the members maximized their time away from Washington. In January of 2006 — not normally a vacation month — Congress met for only one day — Jan. 31 — and in February it gathered for only two days per week for three weeks. In March, it was in session for only nine days and the pattern continued throughout the year.

Voters correctly figured that if their congresspeople didn’t want to work, they would replace them with people that did.

Pelosi now faces the challenge of whether to let West Virginia Democratic Congressman Alan Mollohan head the Appropriations subcommittee, which oversees the FBI, an organization which plans to spend part of the money Mollohan lets them have investigating Mollohan! Formerly the ranking Democrat on the House ethics committee — until his scandals forced him to step down — Mollohan has increased his assets from less than $500,000 in 2000 to more than $6.3 million in 2004. His investments, which generated less than $80,000 in 2000, reaped between $200,000 and $1.2 million in 2004.

How did he do it? He got federal funding earmarked for certain companies that his friends either owned or worked for, then got his buddies to pick up half the tab for joint real estate investments with him and his family. For example, he got FMW Composite Systems $4.4 million in earmarks and then teamed up with its CEO to buy a $900,000 farm, which the Mollohans and FMW’s chief split 50-50. The congressman told The New York Times that the thought that the deal might represent a conflict of interest “did not occur to me” when he — literally — bought the farm.

Now, under FBI investigation, can he really be trusted to head the subcommittee that controls the Bureau’s funding?

Issues like these will crop up throughout the next two years. Congresswomen win leadership positions by the buddy system and the favor system. But once a member emerges to become Speaker, all that has to stop. Gratitude will get you in no end of trouble. What was OK for a congresswoman isn’t all right for a Speaker. The relationships that may have sustained her on the way up will only encumber and embarrass her once she’s there.

The best way to serve her party and the country is to maintain a certain imperiousness, a splendid disregard for those who may have put her where she is but who now can only drag her down.

Like the pole-vaulter who discards the annoying piece of fiberglass that has lifted him over the bar now that keeping hold of it can only knock off the beam over which he has just leapt, Pelosi must be a ruthless ingrate. Only then can she do right by the congressmen and the party that has elevated her to power, not to mention by her constituents in the rest of the country.