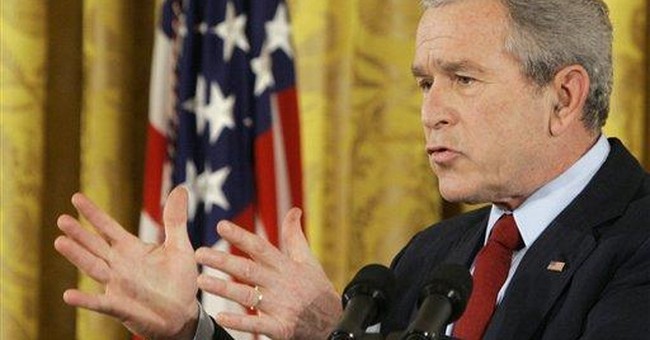 Once again someone has “misunderestimated” George Bush, and, this time, it’s us.

In last week’s column, we spoke harshly about what appeared to be Bush’s appeasement of the Putinocracy shaping up in Russia with its suppression of democracy at home and its energy imperialism abroad. But then the president turned around and blocked Russia’s membership in the World Trade Organization (WTO).

The WTO veto, coming on the eve of the G-8 Summit in St. Petersburg, left the Russian leader gasping and looking very much like the cat who came up empty after the canary flew away.

Our column was written from Moscow after we visited with the modern freedom fighters who are battling for Russian democracy. The president met with them after we left and apparently absorbed their message and the need for defiance. What could have been a Munich moment at the G-8 instead became a standup demonstration of American resolve.

Now the United States needs to go beyond a concern for domestic democracy in Russia and expand its focus to the energy imperialism that lies at the core of Russian President Vladimir Putin’s strategy to reconfigure a Russian empire throughout Eastern Europe. With the complicity of the likes of Gerhard Schroeder, who accepted the bribe of a lucrative ($300,000 per year) job as CEO of the Gazprom pipeline under the Baltic in return for approving and financing the project, Putin wants to be able to turn on and off the gas spigot as his whims and political realpolitik dictates.

Meanwhile Mikhail Khodorkovsky languishes in a Siberian jail for funding the freedom parties. His assets have been confiscated and are now being used to underwrite Putin’s energy imperialism. The day before the G-8 began, the last vestige of Khodorkovsky’s Free Russia organization was obliterated by Putin, as its website was shut down.

Before Bush arrived at the G-8, he said he was not going to dis Putin in public. But his denial of WTO membership is really the ultimate dis. Good for Bush.

Congress’s pay is indexed to increases in the cost of living, but the minimum wage is not. And whose fault is that?

In 1996, I asked President Clinton and Senate Majority Leader Trent Lott (R-Miss.) if they would consider accepting an indexation of the minimum wage as an alternative to the one-shot increase that eventually passed. Lott said yes. Clinton said no. Had the president agreed, the minimum wage would now be closing in on $7, not enough to live on but a lot better than its current, paltry level.

Now Hillary Clinton is attacking the administration and the Republican Congress for raising congressional pay while turning down a minimum-wage increase. But it was her husband’s desire that the minimum wage not be indexed.

The Democratic Party likes the annual fight to raise the minimum wage. It uses the issue to keep its base united, loyal … and poor.

The answer is to index the minimum wage so that it goes up with the cost of living.

Much of the debate over the minimum wage is, of course, obviated by the earned-income tax credit which kicks in for all minimum-wage mothers. The credit, plus Medicaid eligibility, plus food stamps, plus day-care allowances, plus rent subsidies, plus exemption from income taxes, means that those who earn the minimum wage really have a pre-tax income equivalent over $20,000.

Of course Hillary, who won’t release her tax returns but who earned, with her husband, $18 million on their book deals and who profits from his over $7 million annual income from speeches and who benefits from Bill’s potentially massive earnings from his Dubai relationship, can afford to oppose the congressional pay raise. But if indexation is good for Congress, why is it not good for the poor?